This Adorable Feline Cat Burglar Is Taking His Title Very Literally, and He’ll Steal Your Heart While He's at It | 22 Words 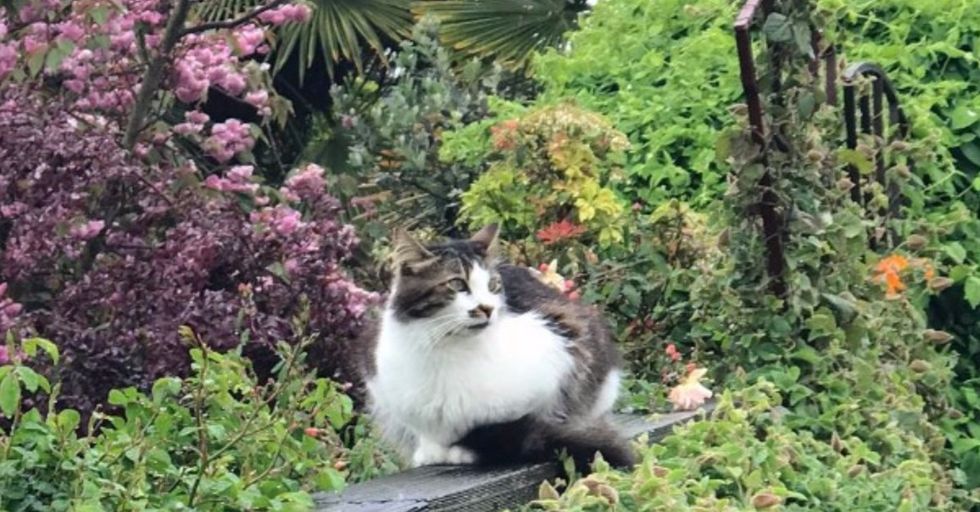 This Adorable Feline Cat Burglar Is Taking His Title Very Literally, and He’ll Steal Your Heart While He's at It

Pets, like people, come with all sorts of personalities. Every once in awhile, we meet one with so much character, charisma, and odd charm that we can't help but notice, and maybe fall in love a little bit. This California cat has one of those personalities. Also, a criminal record.

This is Darwin, known to many as Darwin the retriever cat.

Darwin was a fuzzy feral kitten in 2011, brought home by Karen Flynn of North Berkeley, Calif. The intention was to socialize him and then adopt him out, but, as often happens, there was just something about this cat and his temporary home became his permanent home. Flynn explained, "I knew from the get-go that he was odd. I called him Darwin because I was convinced he was going to naturally select himself out of the gene pool."

According to his human, "If there was a dangerous object, he would find it. He would chew on tacks, broken glass, scissors, X-Acto blades, walk toward hot burners and open flames, that sort of thing."

Soon Flynn starting finding leaves in and around her house. It took her awhile to figure out how they were getting there. When she noticed teeth holes in them, she had her suspect. Darwin quickly moved from leaves to other assorted objects that he'd collect and bring home. Mostly his treasures included scraps of paper, envelopes, and other small items easily carried by a cat in the night. Flynn began photographing these retrieved objects, and Darwin even got his own Facebook page.

People enjoyed seeing what new mischief the thieving cat was up to. One could almost decipher a theme, plan, or thought process by looking at the grouped findings, the evidence of Darwin's nighttime escapades.

This pair of sandals was retrieved one at a time, 21 days apart!

Was he searching the entire time for the other shoe? When he saw it, did he recognize it as part of a matching set, the other safely tucked away in his criminal lair? WHAT IS THE CAT THINKING?

The photos of the objects were awesome enough, but Flynn soon took it to the next level.

Whether it was because of her own curiosity or the curiosity of Darwin's devoted fans, we may never know. But we are delighted that Flynn set up a motion activated camera to catch the thief in the act. Complete with night vision! What was Darwin going to do next? Then, an unexpected change took place.

By all accounts, Darwin's thieving had been on the rise. He brought home a slipper recently, a decidedly indoor item. And then, nothing. Had he flown too close to the sun? Has our intrepid cat burglar nearly been caught? Was he spooked? Whatever his reasons, he took a break.

Was Darwin leaving the criminal life? Going to toward the straight and narrow?

Would fans have to be satisfied rewatching old night-vision videos? What had happened to turn a lifelong cat burglar into a homebody? Fans checked in to see if Darwin was OK. Flynn had no explanation for his sudden change. In response to one fan asking if Darwin was OK, Flynn answered, "I have no idea. I tried to have a conversation with him, and he just looked at me like I was crazy." Cats.

Luckily, there's no shortage of photos and videos of Darwin's criminal days.

He actually found a THIRD sandal! This cat's haul leaves us with more questions than answers.

This post was sadly made in loving memory of Darwin.

We have sad news to report. Just as Darwin seemed to be settling into his new clean lifestyle, he was struck by a speeding car and killed outside his Berkeley home. Flynn is devastated by the loss of her quirky kitty, but has found unexpected comfort from the complete strangers who had fallen in love with him from his Facebook fame. “I just thought he was awesome. And to read what all these other people thought of him …it really helped me through it," Flynn said. “It was pretty great." Darwin's owner made a Gofundme page in his honor to help spay, microchip, and de-flea other stray cats in the community. She asked that each of Darwin's Facebook fans donate $5 to the cause. You can contribute to her cause and read more about Darwin here.