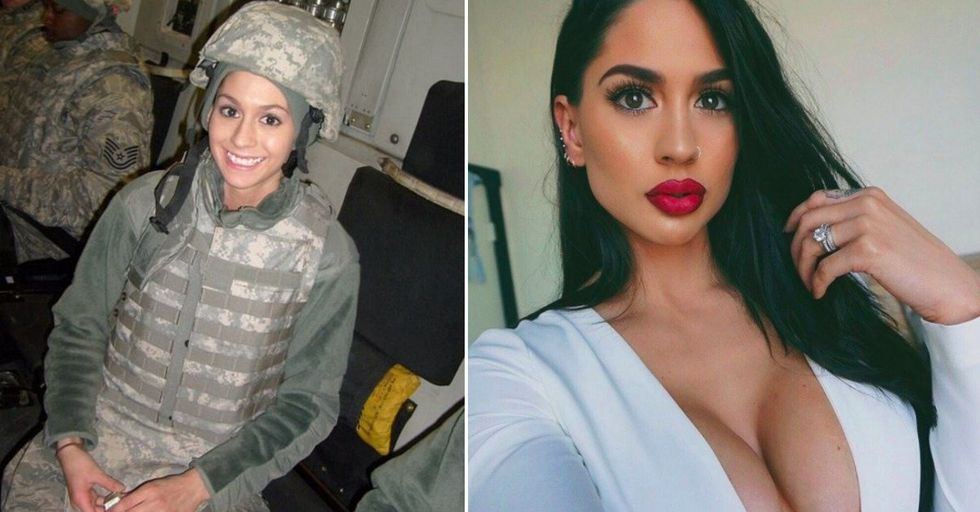 Hope Isabel Howard has gained more than 580,000 Instagram followers for a couple of reasons — she has a flawless selfie game, but she also has an inspiring story to tell.

From the age of five years old, she wanted to be a model. But as she grew older, something else grew and that was a deep desire to help people. "As you can imagine, the world of modeling can be very vain and the business of helping people well, it is everything but vain," she writes on her website.

She began to have an internal conflict with this, and as soon as she graduated high school, she joined the United States Air Force and became a Fighter Jet Mechanic.

"At the age of nineteen I was deployed to Afghanistan where I had an M-16 machine gun strapped to me pretty much 24/7," she said. "This was both the worst and best experience of my life because I did an immense amount of growing and began to see the world differently."

"Most importantly though," she continued, "I began to dream again and that's when I started to become more mindful of the food I ate and began focusing on physical training."

She credits lifting weights and eating properly to saving her life.

Having completed her six-year enlistment with the military, and after some words of encouragement from her grandmother, Hope began a full-time modeling career.

"My grandma told me, 'You have to live your life no matter what,' so from then on I decided to do just that," she said.

"I decided to get out of the military and pursue fitness modeling and personal training full time," she continued. "This way I could have the best of both worlds. I could model while helping others."

Hope emphasizes that her aim is not for others to look or be like her, but to help them in their personal and unique fitness journeys.

“I have always believed that there is beauty to be seen in everyone," she said. "I also believe in protecting my long term health while pursuing my physique goals."

“My goal as a personal trainer is not to make you feel like you need improvement, but to offer guidance and advice if you want to make a change."

Another change she made was getting married to her husband Cody, who you'll often find in her pictures.

But she said her main message is one of hope, no pun intended, that you can overcome any adversity and do what you want to do.

"I don't come from privilege and I know what it means to be poor, but I'm not embarrassed about it," she said. "I've had to fight extremely hard to get to where I'm at, and I have so much farther to go." We're all just a work in progress.