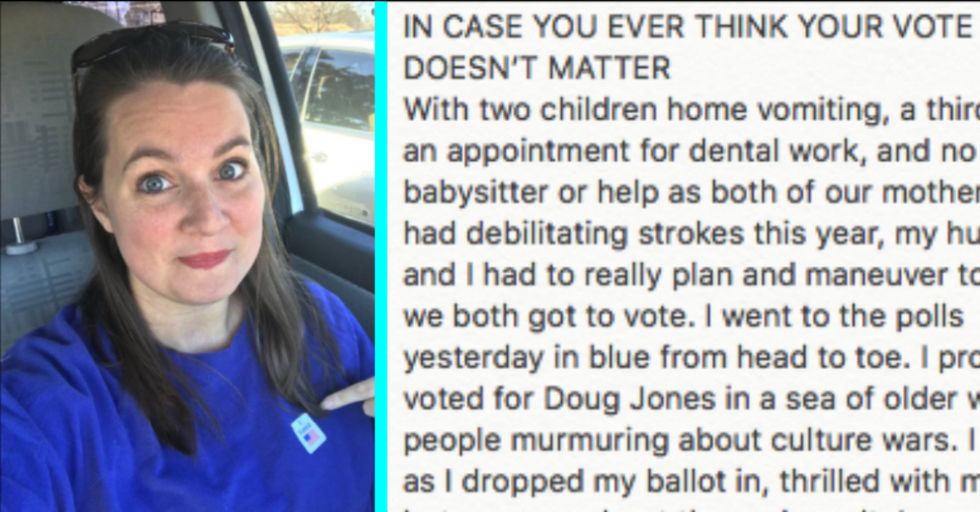 In today's political climate, it's so easy to become discouraged and feel as though your voice doesn't actually matter. There are some days that you see so many stories of the bad guys appearing to win that it's tempting to give up fighting the good fight. It'd be easy enough to do, right?

But here's the thing: We can't give up. Our voices do matter and so does our votes. Don't believe us? Then turn your attention to the story of Ashley Sparks.

She lives in Alabama and is the mother of three girls. Like most parents, her life can be pretty hectic at times. That can make it especially difficult to make arrangements around voting time.

On the day of the Alabama Senate vote, Ashley's life was made even more complicated by a few factors. First of all, two of her kids were sick.

And the third one had a dentist appointment for that same day. That's not the only complicating factor Ashley was dealing with.

Both her own mom and her husband's have suffered debilitating strokes this year.

This means relying on grandma for babysitting was out of the question. At this point, most people would probably decide to stay home rather than driving to the polls to cast their vote.

Ashley says it took some real maneuvering to finally figure out a way to get to the polls.

But she wanted to vote, so she made it a priority. After all, we all know how important this particular election was. It was a close race between a child molester and a non-child molester. Because somehow, a child molester was allowed to run for office.

But Ashley and her husband put in the work and made it to the polls.

Ashley says she and her husband dressed in blue from head to toe to show their support for Democratic candidate Doug Jones. And it's a good thing they were there because what happened next is almost too incredible to believe.

As you no doubt already know, Doug Jones won the election. Obviously, Ashley was thrilled.

As were many people all over the country! But once the precinct-specific numbers started rolling in, Ashley's jaw dropped.

This is some of the most concrete evidence we've seen about how important each individual vote is.

Obviously, you know that voting is important. But it's stories like Ashley's that reveal just how close these races could be — even ones involving child molesters.

While Ashley freaked out about how her and her husband's votes had tipped the scales in Doug Jones' favor, she was also quick to point out the people who were truly responsible for the win.

Without the black women of Alabama, Roy Moore — a child molester — could easily have won the Senate seat. The fact that the race ended up being as close as it was can be blamed on the white folks who voted (inexplicably) for Roy Moore.

Anyway, hopefully this story inspires you to get out there and vote!

Vote early! Vote often! Vote even when it's easier to stay home and not vote. Because we need people like Ashley and her husband who will go above and beyond to keep the good guys in office and the bad guys way the heck out of it.