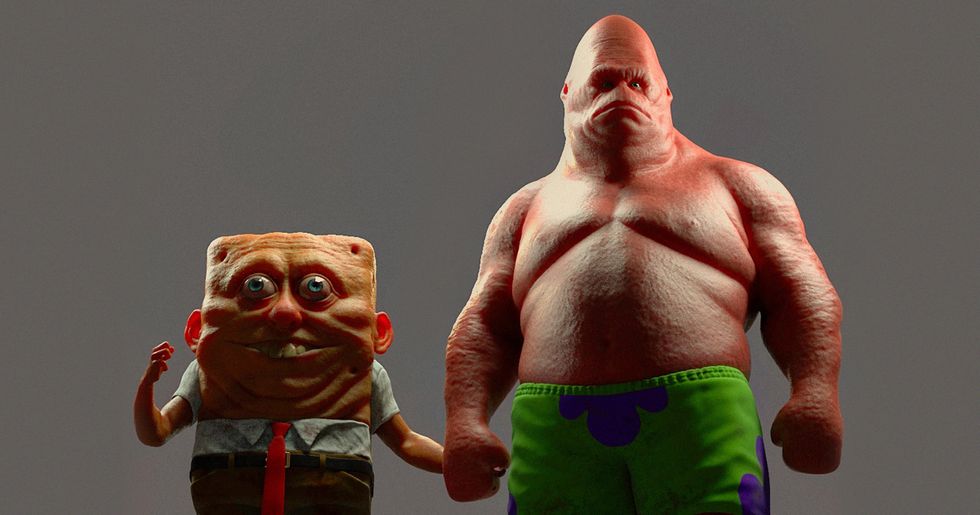 Being an artist gives you the freedom to explore, enhance, and even redefine beauty. Artists are constantly evolving with their work and as art grows, so does the threshold of creativity. Now, thanks to Instagram, artists are able to share more of their work on a platform that reaches all around the world. More than ever, unique art is being shared and showered with love thanks to social media and the brave artists who maneuver and pioneer new forms of art.

One artist decided to share his 3D art with his followers and let's just say, sometimes the beauty of art can be quite terrifying. His art shows some of our favorite cartoon characters from The Simpsons to Spongebob Squarepants to Phineas and Ferb, but they don't look exactly how we remember them...

Reactions vary from amazement to disgust to straight up fear. Some of his art pieces have really freaked people out, so you'll just have to see for yourself to see what we mean.

Art can make you very emotional.

No matter the medium used, art is meant to provoke emotion and hopefully draw a reaction from its viewers.

But beauty is in the eye of the beholder.

#EverythingIsLove "On the left you can see a masterpiece, in the centre we have the Mona Lisa" https://t.co/TqrN1FBqGS
— Nonke Mabizela (@Nonke Mabizela)1529232356.0

Everyone interprets art differently, and some just completely miss the point, if there is a point.

Artists are really out there doing the best they can.

Every artist is trying their best to make something new and amaze fans, which can mean taking some pretty big creative risks in their work.

But sometimes art can be a little scary.

Art that is almost too real can leave you with a really disturbing feeling, and one artist is taking that to a whole new level.

Say hello to your new nightmare.

Miguel Vasquez creates these 3D art pieces of famous cartoons and the internet is shook beyond words.

This could scare the pants off of Spongebob.

Vasquez is a little too good at his job and has decided to share his gifts with the world which might be a blessing and a curse to us all.

Does anyone else feel a little nauseous?

The details of Vasquez's work are so good it's scary.

He wanted to include the whole gang.

Some of his most well-known work has been the cast of Spongebob Squarepants and we aren't sure whether to be amazed or horrified.

Here's the famous good-looking Squidward, made with a perfect jawline and incredibly scary bone structure.

Vasquez did this piece of Mike Wazowski with just enough terrifying details to make us actually afraid of monsters in our closets.

This is a true monster!

Mike would have scared children all over the world if this version was used in the movie.

Phineas and Ferb are now a source of fear for everyone.

The innocent childhood show is now forever tainted by those big, creepy eyes.

He went and attacked the Thornberry family from Nickelodeon! I don't know if I can take much more!

This is just so disturbing! That last image looks like a straight up mugshot.

Someone set this as their background and I feel very afraid. His eyes are just staring into my soul.

Homer Simpson is a big no for me.

I used to love this show and now I'll never look at it the same way again.

My 3D depiction of what Homer and Marge Simpson would look like in real life. https://t.co/YSFBUOgYUc
— Miguel Vasquez (@Miguel Vasquez)1553854447.0

Here's one of our favorite cartoon couples, now scarier than ever.

Part of me wants to pretend I never saw this.

These characters are now way too realistic and I will never be able to unsee these images.

Other people were feeling equally as disturbed.

Many Twitter replies were people commenting how scared they were of these art pieces, some even tweeting pictures of Homer himself pouring bleach into his eyes.

It is not the time for adventures, not anymore.

I used to be ready to watch Adventure Time at any given moment, and now I'm not so sure.

Someone had the audacity to animate Finn!

And now I really can't get this picture out of my head!

Hey Arnold, you are scaring the children.

Arnold and Gerald from Hey, Arnold! are really not as friendly as I had them painted them out to be.

Even Courage would be scared of himself!

Courage the Cowardly Dog was a super weird show that was pretty creepy to begin with, but this gives creepy a whole new definition.

If I'm a grown woman and I'm afraid of these cartoons, I can't imagine how a kid would react.

Someone decided to scar these children.

Some of Vasquez's work was featured in this "Kids React" video on YouTube, and their poor, innocent eyes will never be able to unsee these things.

If you feel creeped out, then Vasquez is doing his job right.

Vasquez was shocked by the overwhelming response of some of his art but is not offended by people being grossed out by his work.

And it was really freaking people out.

It's a weird mix of emotions but for some reason I can't look away from these images.

No sleep for the rest of us.

I might have to sleep with the light on for a few days.

But a lot of people are huge fans of his work.

One of Vasquez's pieces was featured on a billboard showing a character from the show Hot Streets. Hopefully, it didn't scare any drivers.

I saved the worst (best?) for last: his rendition of Kermit the Frog has me totally freaked out. Why does he have teeth? And why does he have man boobs?!

Vasquez has a method to his madness.

Vasquez is a creative genius and we got a chance to see more of his work and hear his creative process from this interview he did with Art Insider.

His art isn't for everyone.

when someone accidentally stumbles across my artwork https://t.co/pWTHcxiajA
— Miguel Vasquez (@Miguel Vasquez)1551432936.0

But you can't deny the insane talent Vasquez has.

Some of Vasquez's pieces are being made into actual toys that are available for purchase. If you wanted to scare your niece or nephew, you know what to get them.

It could be the worst present they've ever received, but at least they'd remember it forever.

So the best thing you can do is share the fear with your friends and family. Share this art with others so you aren't the only one feeling haunted.