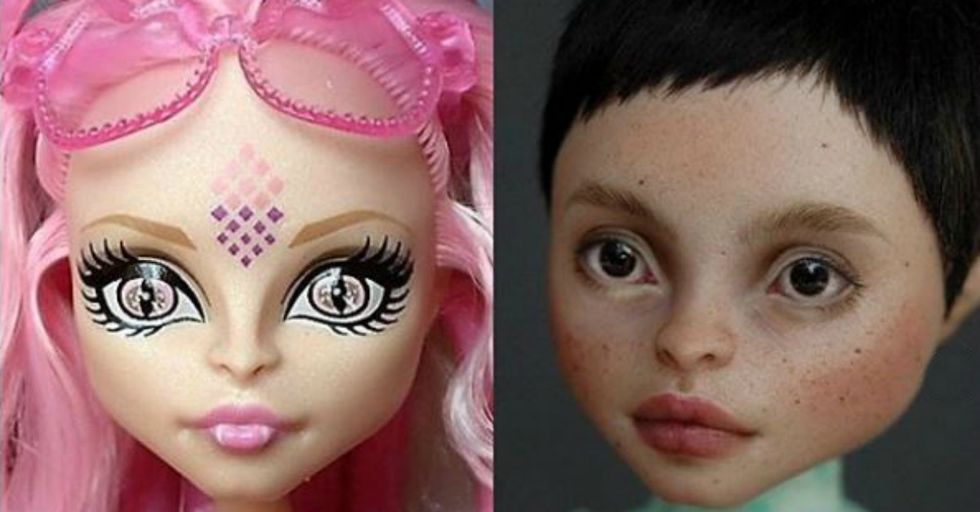 Raise your hand if you played with dolls when you were a kid. I certainly did, and recently went through all of my old favorites from childhood in an effort to finally clear some of the piles of junk out of my parent's basement. Looking at them as an adult is a bit disturbing since you realize how completely unrealistic their faces and bodies are. The giant eyes, the flawless skin, the complete lack of wrinkles, freckles or dimples. Barbie, Bratz dolls, I'm looking at you.

In a world of dolls that look absolutely nothing like actual human beings, one woman is working to change all that. Olga Kamenetskaya is a Ukrainian artist who uses the dolls we grew up with, stripping them down and transforming them into something seriously extraordinary. Keep scrolling to see her most impressive "before and after" makeovers. They may change the way you look at dolls forever.

She's a Ukranian artist who does something seriously spectacular with the dolls we've all grown up with: She strips off their makeup and paints on new, ultra-realistic faces, and the results are nothing short of jaw-dropping.

Here's a before and after shot.

As you can see, the "before" pic is a traditional doll face with enormous eyes, garish makeup and no imperfections whatsoever.

The "after" results, however, embrace imperfections.

In fact, the artist makes a point of making them look as realistic as possible, and that even includes the occasional blemish or two. “Some people are scared by the realism of my dolls," Kamenetskaya said in an interview with Vogue.

"They find them terrifying."

"Others, on the contrary, admire such aesthetics." I would describe them as "terrifyingly realistic."

She believes that the one thing that separates her work from "other masters" is its "humanity."

Not surprisingly, Kamenetskaya first drew inspiration for her work from the most iconic doll of all time: Barbie.

“My family was not rich, so our parents bought the first Barbie for me and my sister only when I was 9," she said.

"We both adored her!" She most often uses Barbie, Ever After High and Monster High dolls as her starting point for her amazing creations.

Not only does she transform their faces, but she also creates custom outfits that are seriously swoon-worthy.

After being taught how to sew by her seamstress mother, she first began making her own outfits in high school.

“I was not afraid to stand out."

"On the contrary, I liked it, so sometimes my image was very eccentric." She first completed one of her doll "makeovers" in 2012.

Since then, it's turned from a casual hobby into a full-time career.

She credits her husband for his constant support and encouragement. “I didn’t believe in myself the way he [believed in me]," said Kamenetskaya.

"I always think that it’s possible to do better with each new doll." Looking at these before-and-after collages, it's hard to imagine that the last photo is even the same doll from the first picture.

Not surprisingly, Kamenetskaya is also a trained makeup artist.

Considering she's basically sculpting and manipulating these faces with paint, you can imagine the kind of insanely impressive things she'd be able to do on actual human beings.

Bland, generic Agent Scully on the left is transformed into the fully fleshed-out and completely lifelike Agent Skully on the right.

And what about this clever witch-turned-Disney princess?

Kamenetskaya took a completely unrecognizable Emma Watson doll and transformed her into the real deal. Seriously, this could be a photoshoot of the Hogwarts alum and I wouldn't be able to tell the difference.

The attention to detail is mind-blowing. She even managed to perfect Cara's signature thick eyebrows. Now if only I could manage that on my own face...

Sure, the "before" doll was stunning, to begin with, but Kamenetskaya's additional of subtle shadowing, insanely realistic-looking eyes, and full, pouty lips make this "after" result a dead ringer for the famous model.

Does this braided brunette look familiar?

Jennifer Lawrence brought the character of Katniss Everdeen to life on the big screen, and Kamenetskaya recreated her likeness perfectly. Oh, and she made an exact miniature replica of her striking black outfit to complete the look. No big deal.

It's "The Boy Who Lived", Harry Potter himself! Honestly, if I were Daniel Radcliffe, seeing this doll might make me feel just a tad creeped out. It's just too real!

Kamenetskaya's dolls stand out from the rest because of her fascination with imperfections.

“I don’t like when the new face of the doll is ideal and perfectly symmetrical, it makes it lifeless," she said.

“I always deliberately leave some flaw that may not be noticeable to everyone, but [gives] the doll invisible charisma."

"Perhaps, this flawed beauty is the message that my dolls carry." Invisible charisma. That has a nice ring to it, doesn't it?

The completed creations have a mesmerizing quality to them.

There's something about the way their eyes sparkle and the complex details of their skin that make them look almost other-worldly.

Her male dolls are just as jaw-dropping.

She somehow managed to take a completely generic Ken doll and transform it into a man so dynamic and lifelike that it could start talking and it wouldn't surprise me in the slightest. Also, how did she manage to make the mouth look so completely different?!

She often shows the progression of her work in photo collages.

First, she does a rough sketch on the face of what she wants the features to look like, then gradually fills them in and adds contouring until she's achieved it. Mind-blowing, right?

In case you aren't as up-to-date on your Norse history as you should be, Lothbrok was a Viking hero and the legendary king of Denmark and Sweden. So, basically, she was somehow able to transform a Peter Pan-ish boy into a tough, bearded Viking. That's pretty darn impressive. Also, is it weird to be attracted to a doll? Asking for a friend.

Kamenetskaya does custom orders as well.

"I painted this doll for a little lady as a New Year gift from her dad," she said. "And I very much hope that the princess will be happy with her small copy."

Like this adorable-yet-oddly-dark teddy bear. Sure, it's cute, but it also makes me feel just a tad uneasy, which is probably what she was going for?

Not only are they completely boring and one-dimensional they also teach kids that these insane beauty standards are what they should be trying to live up to at a very young age.

Straight, white teeth are switched out for perfectly imperfect ones instead, and a smattering of beauty marks adds stunning realness.

Even dark under-eye circles are celebrated instead of covered up.

Have you ever seen a doll that looked like it hadn't slept in a month? I sure haven't, but I'm pretty pleased that my own ridiculous under-eye circles are finally being represented.

I don't know about you, but these amazing photos have made me want to donate my old doll collection to Olga Kamenetskaya. Because the world needs more dolls that look like actual people, flaws and all.