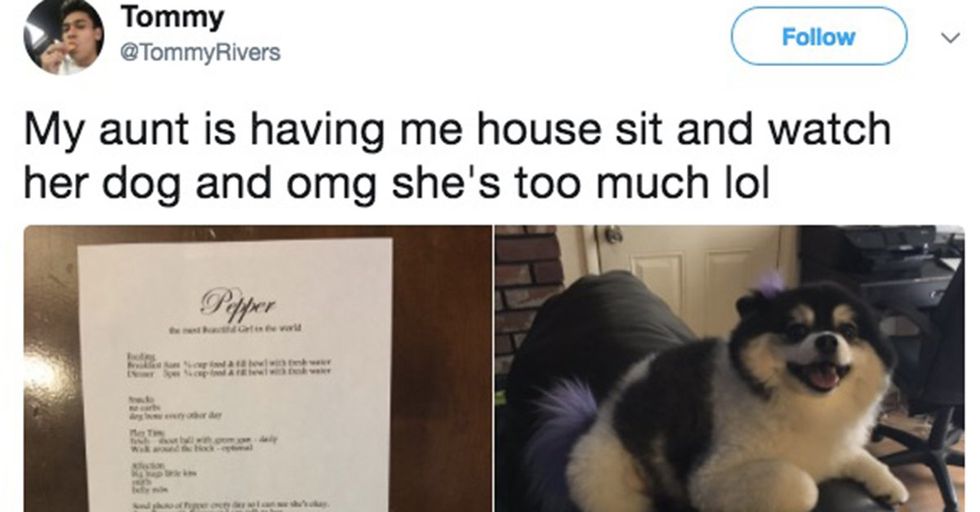 We're all particular about the way our loved ones are cared for when we're away, but few people are as cute as this aunt is in leaving her nephew very, uh, "specific" instructions on how to take care of her furry companion in her absence.

A Twitter user named Tommy recently set the Internet aghast with "oohs" and "ahhs" when he shared some very curious instructions left to him by his aunt.

She's very particular about the way her dog should be cared for, and he was only too happy to oblige her, documenting the process along the way for all to see.

As you can see above, the pup's name is Pepper.

(But the Facetime thing is a little much.) Tommy clearly had a blast sharing the photos, but not nearly as much as the people did reviewing the list and taking in the majesty that is Pepper.

If this is how Tommy treats her, we can only imagine how Tommy's Aunt (name unknown!) treats her. But we're dying to find out!

People who didn't even know Pepper a few hours ago were DEMANDING MORE PEPPER!

And who could blame them? We all need at least one cute pampered dog in our lives.

Naturally, people were quick to make fun of the aunt's clinginess when it comes to her dog.

She asked for everything just short of proof of life, so you might as well indulge this request from a stranger!

Even if the aunt suffered a joke or two at her expense, it's clear Twitter was keeping an eye on Tommy.

That leash isn't going to find itself, sir!

Oh, and this little detail COMPLETELY escaped my attention.

Pepper's purple. Because...of course she is. It's the color of royalty, you know!

Between that little flourish and the penguin pajamas, I think we've got a very dapper dog here.

I mean, was there any chance that Pepper didn't have the cutest pajamas in the world?

If taking a dog to the park helps you find a girl, then it's a safe bet that putting this one up on Twitter will get you all sorts of DMs.

Tommy probably knew that from the beginning and is still sorting through all the fawning messages.