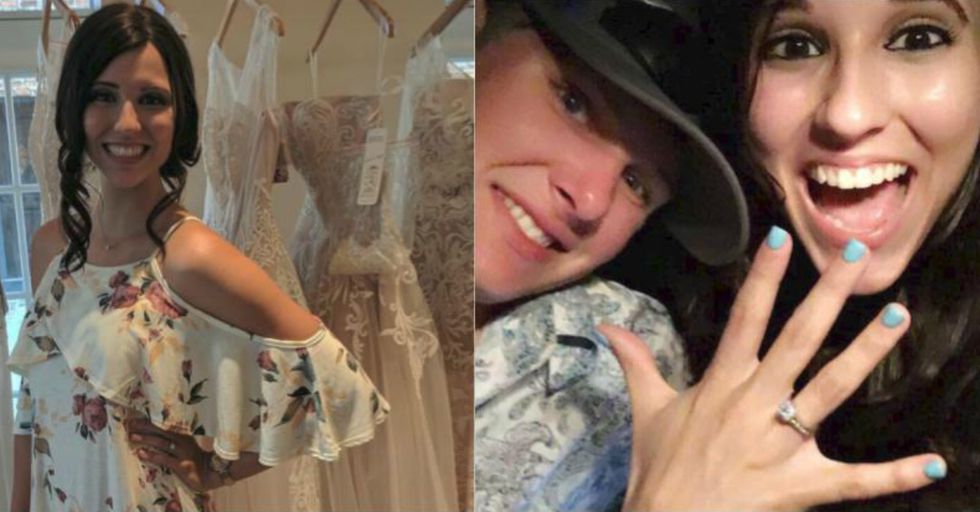 We're told our entire lives that inner beauty is more important than outer beauty. And while that's a wonderful concept, the truth is, it's hard to believe that sometimes. Especially as women, and especially in a society that puts so much emphasis on how we look.

But then there are people like Makenzee Meaux, out there reminding the world that inner beauty is what really matters. Meaux's engagement photos prove that the best look is the one in which you feel confident just being yourself, whatever that looks like for you.

This is Makenzee Meaux.

She looks every bit the glowing bride-to-be. Back in May, Meaux got engaged to her boyfriend, Bryan.

When she was just 8 years old, Meaux was diagnosed with alopecia universalis.

Alopecia universalis is a condition in which you experience the complete loss of hair from the scalp and body. As Meaux writes in a recent Facebook post, doctors often refer to it as the "mystery disease."

Currently, there's no cure for the condition.

All of your hair suddenly stop growing, on your scalp and body. Unfortunately, doctors still can't figure out why this happens or how to bring back the hair.

An alopecia universalis diagnosis can feel troubling and scary, especially because there are so few answers and solutions.

Meaux points out in her post that for many women, hair is a major part of their self-image. So losing all of your hair can be traumatizing, especially as a little girl.

So for Meaux's engagement photos, she decided to do something that scared her: embrace her true self and take off her wig.

"This is probably the most difficult thing I will ever do in my life," Meaux wrote. "While taking our engagement pictures, I decided it was time to stop hiding from the one thing I tried hardest to conceal for almost 15 years." Accepting yourself is one thing, but truly embracing who you are and loving yourself is quite another...

But that's exactly why Meaux wanted to take some engagement photos without her wig.

It was a cathartic moment for her, and quite honestly something that had been building up for years. "I experienced lots of bullying in the early years and along the way I lost all hope that I could ever feel beautiful again," she said.

But when Meaux met her current fiancé, he helped her feel beautiful and comfortable in her own skin.

"I have never felt more confident or more beautiful than I do with him by my side," Meaux explains. Major couple goals happening right now.

Bryan has helped Meaux to see that hair isn't what makes her (or anyone else) beautiful.

In fact, it's just hair. It doesn't define how people feel about you, or how important you are to others, or whether or not you should love yourself.

Even though it can sound cliché, it's true: the only thing that matters is what's on the inside.

Only 2 percent of the population is at risk for developing alopecia, and within that specific group, 20 percent can develop alopecia universalis. It's the rarest form of the condition, so it can feel particularly isolating.

But Meaux isn't going to let it get her down ... instead, she's spreading a positive message and encouraging everyone around her.

"[Bryan] has shown me that the people who love you do not care whether or not you have hair," she writes. "And the ones who do are not worth your time or your love. So this is me, the true me." Yes, girl. Keep shining your light and that incredible message.