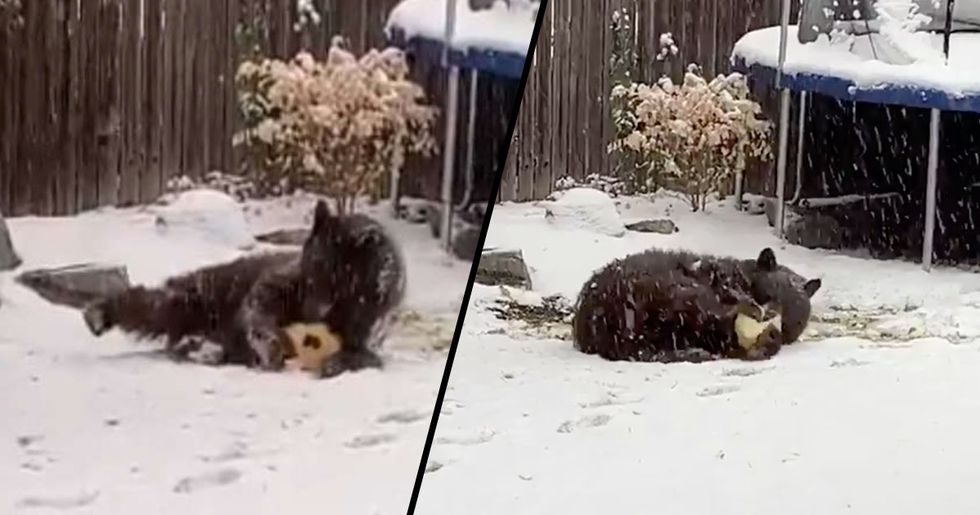 For some, the idea of a real-life bear showing up in the backyard would be ludicrous. But for people that live in rural areas, this can actually happen.

We're not talking about some Winnie The Pooh fantasy. I mean actual wild bears climbing the backyard fence.

But whilst this can be quite scary, one Colorado resident certainly saw the funny side when a bear trespassed on his land.

Scott Willhite couldn't believe his eyes when he saw what the bear got up to in his backyard.

Keep scrolling to check out the unbelievable pictures...

Bears are kind of cute...

I mean besides the fact that a wild bear is strong enough to cause bodily harm to any human that gets in their way, there is something cute about them.

Some bears respect the fence...

Whilst you might not think a flimsy fence could keep a bear at bay, some do respect the "keep out" sign.

A gang of bears!

If, like this Twitter user, a gang of bears shows up in your yard, then trust me, you're in trouble. I mean, I wouldn't want to take on 3 wild bears, would you?

On the hunt for a watering hole.

If you live in an area where wild bears are known to be dwelling you should maybe think twice about getting an outdoor pool...

But not as much this Twitter user, who was willing to fight the bear to the last crust.

How do you get a wild bear to leave your backyard?

The truth is, it can be quite difficult to encourage a wild bear to go away.

If you choose to live in wild remote areas...

Then surely you can't blame wild bears for turning up on your property, right?

Humans should learn to respect the bear.

If the Brother Bear movies taught us anything it's that we should try and live in harmony with bears.

A backyard bear can surprise you.

It seems people across the world have been pleasantly surprised with what wild bears have gotten up to in their backyard...

Who would win in a fight between a dog and a bear?

This clip above proves two pooches can certainly scare off a wild grizzly.

The bear that showed up in Scott's backyard played in the snow.

Watching from his window, Scott was intrigued by the bear frolicking in his snow-covered back yard.

Watch the cute vid below.

Fortunately, Scott filmed the whole thing. The bear found a foam soccer ball and was captivated by the toy. Watch out, David Beckham! Continue scrolling to watch the adorable video of the bear that got stuck in a dumpster and needed a helping hand to get out. I mean, what else are lunch breaks for?