This Bizarre Mansion For Sale Is Insanely Cheap...For a Very Good Reason | 22 Words 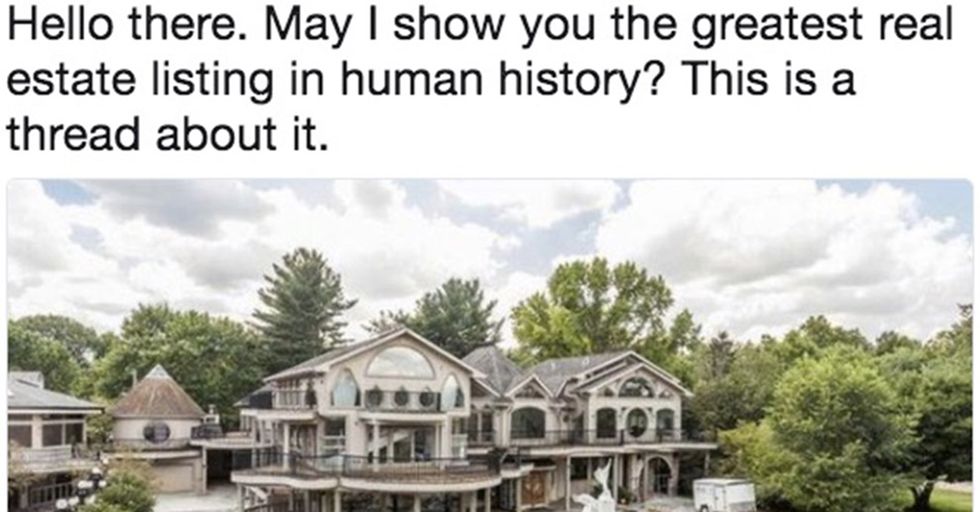 This Bizarre Mansion For Sale Is Insanely Cheap...For a Very Good Reason

All house hunters are looking for the perfect bargain.

But while this Indianapolis house might be cheap, once you look inside, you'll see why. And its low asking price might not seem like such a deal.

The house has been on the market for eight days, but it was this guy's tweets that seemed to give it a big boost in public perception.

He starts off with quite the tease, but the property lives up to the hype.

He offers the specifics.

That's a lot of living space for under two million bucks.

But while the house itself is head-scratchingly odd, it's the staging that really makes you wonder what they were thinking.

If you're not familiar with "staging," it's temporarily decorating the house to make it look its best so you can sell it faster.

The trailer parked in the marketing photo is a nice touch.

Couldn't they have removed it?

Wow. I can't even think of what genre of design that might be. It gets worse. Much, much worse.

Water cooler in the corner is a fancy touch.

You have to wonder if this was even done by someone who knows their way around, or if it was just how the house looked prior.

As you'll see, there are pretty much no smooth surfaces in this home.

It's a mess of jagged angles, rough textures, and...desk chairs.

The placement of the furniture is truly mind-boggling.

Almost as odd as the fact that this house has tons of stairs with no railings.

If you're wondering why this house is so odd, it's because it was purchased by a pimp (really) when it was a small one-story home in the '60s. He just kept adding on weird stuff. It's a house with a (dubious) history.

I mean, the spacing of the furniture makes no sense.

You've got this many bedrooms and two giant beds share a room facing each other? Weird. Let's keep moving. We're hardly done.

If you're going to have ugly lion heads, at least make them symmetrical.

I hate to keep being incredulous, but what's going on here?

This room...what is its purpose?

And why are beds and grills sharing rooms?

This is the perfect observation.

It really does look like a house that was designed for swinger parties. Maybe that explains all the beds.

Let's end on a high note.

Dolphin statue! If you're interested in this house (or just want to see more pics), check out the listing here.