This Brave OKCupid User Gets Blackmailed By a Scammer, Then Gets Sweet Revenge | 22 Words 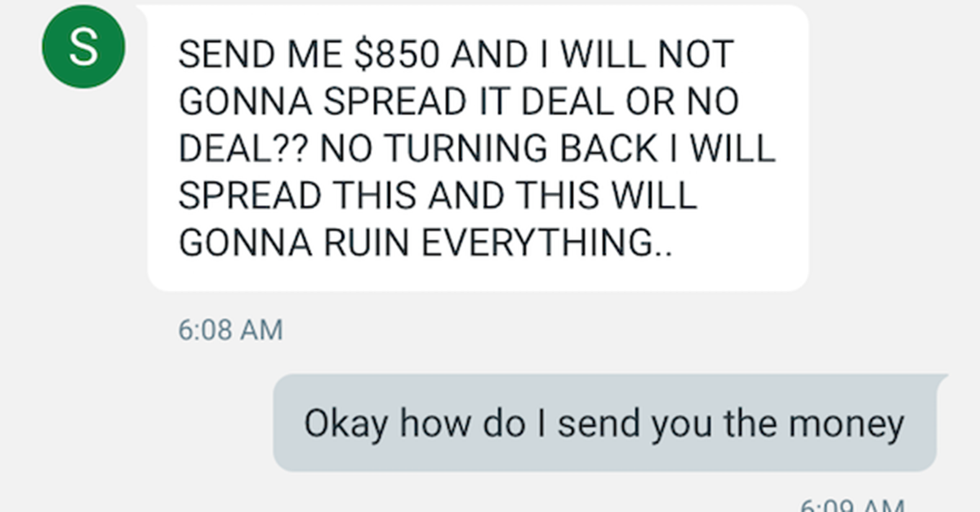 This Brave OKCupid User Gets Blackmailed By a Scammer, Then Gets Sweet Revenge

Anyone who sends nude pics to a stranger knows there's a risk that goes along with such a bold move. The person, even if they're real, can turn on you and become spiteful, sharing the pic to embarrass you.

Or, in this case, the person you were talking to the entire time turns out to be a scammer who, once they get your pic, blackmails you by threatening to spread it unless you pay them. Of course, there's no guarantee that paying them will keep them from sharing it. There's also no guarantee that they're actually going to spread it. Taking a chance, the guy getting blackmailed decided to have a little fun by tormenting his blackmailer with EVERY. LITTLE. DETAIL. It's oddly satisfying...unless you're the victim of his trolling.

The conversation picks up after the scammer has already threatened to go public with the pic.

He's "adding friends" from the victim's Facebook page to show that he can reach them with this incriminating pic. Not the best situation to be in for the mark, but it does show the scammer means business. Amazing that they have this kind of reach though, isn't it?

The victim decides to play ball to avoid the embarrassment of having a pic of his junk circulating around the Internet.

It does look grim. It's also impossible to tell what's real and what isn't, but in instances like this, it's easy to see why someone would want to err on the side of caution. It's a sensitive subject, no doubt.

I'm not sure if sharing the pic will "RUIN EVERYTHING," but it sounds like this isn't the first time the scammer has done this.

How does $850 sound? It's steep, but I'm guessing that the hacker/scammer knows the market for this sort of thin. How much would YOU pay?

I like the "LOL" as he's being blackmailed. He's got moxie.

Clearly, this guy getting scammed has a sense of humor about this. I mean, you might as well try to make the best of this, right? Otherwise, you could go crazy. But that wasn't all...

He then asks the blackmailer to check to make sure the place is open. That's what we call "Putting your enemy to work."

This is about the time you can start to tell things change. The recipient is putting his enemy to work, surely, but why? Well, probably just because he's angry.

He's getting awfully familiar with someone who claims to have incriminating photos. But it CAN get chilly outside. We ALL know how it is, especially if you live up north. What about where the scammer is? Who knows. He could be anywhere.

Stretching things out just a little bit by roping his doorman's tough life into the conversation.

Unsurprisingly, the scammer is pretty impatient. I don't think he wants to make conversation. He just wants that wire payment from this dude. Which means that by stalling this scammer, this guy might just be saving someone else from the same fate.

You want the money. Customer service is NOT this blackmailer's strong suit, but instilling fear in his targets his. I guess that's more subjective, but he's not doing a great job in this instance.

But the victim isn't. He's still taking his sweet time. He's clearly not deterred by the redundant threats. I get the feeling the scammer works off a pretty strict script, and this is throwing him off. Somehow, though, this story only gets crazier...

Something tells me English is not this guy's first language. If it is...yikes.

These scams can come from anywhere. The Internet brings us together, but not always in a good way. Places with lax laws and unsavory people can provide access to your most guarded info.

Correcting the blackmailer's grammar? Bold move. Let's see how it plays out.

I mean, if you're going to get under someone's skin, this is the way to do it. Even people with good grasps of English hate it when their grammar is corrected. This guy is no exception, wherever he (or she) might be.

You have to love the construction line in response to the question about building an excuse.

We're at yet another stalemate. This guy doesn't want to go to the money unless he's given proof it's there. The other guy clearly didn't send it so he can't provide proof. Scamming's a tricky business, literally and figuratively.

All of a sudden, you get the feeling that the victim is the one in charge here.

The tables have turned, which the scammer can't feel great about. I'm sure he's used to feeling in control. Through no fault of his own (other than being a really bad dude), he's lost that control. It's now a whole new ballgame.

"It was really nice chatting with you."

Ever wonder what a meltdown looks like? This is it. It turns out that when the scammer's not pulling the strings, he's little more than a toddler who had his favorite toy taken away. No wonder he can't find honest work. Then things turned a little scary...

Things get a little violent-sounding, but it's becoming very clear that the blackmailer is all talk and no action.

I mean, how many threats like this can you hear before you just stop listening? It looks like the target stopped being scared a long time ago. He stopped taking the threat seriously, too.

"Too many words." That's this exchange in a nutshell.

The target's spent a long time working through this nonsense, but it's time well spent. No, really! Every minute he ties this guy up in this silly exchange is time that the scammer's not using to torment someone else.

Then we get to this stage in the conversation, in which we dive headfirst into semantics. Something tells me that the scammer is not interested in this back-and-forth, but he sticks around for reasons unknown. He can't really think he's getting paid at this point, can he?

"Blackmailer Scumbag has left the conversation."

Smell ya later, scammer. That was a fun little romp. Albeit, one that we wouldn't wish upon our worst enemies. Be careful out there with your senstive info, folks!