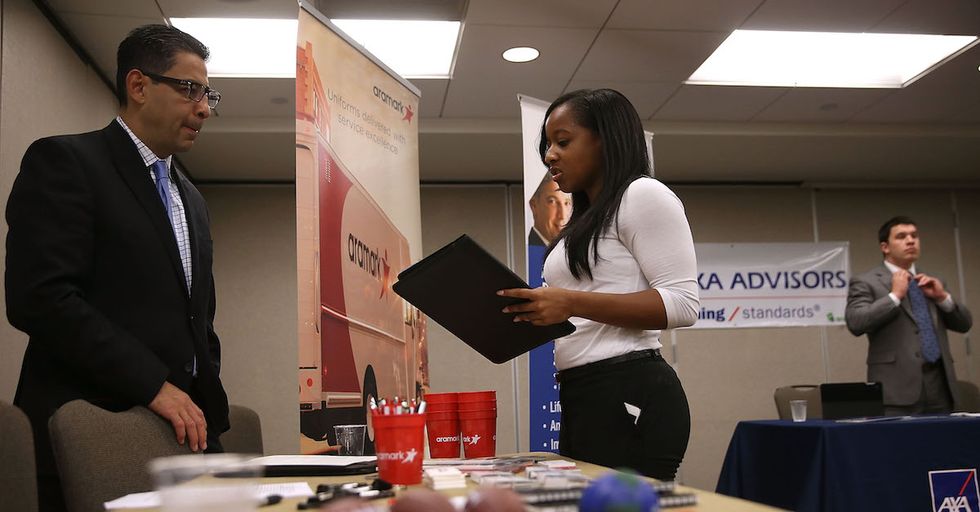 Anne Victoria Clark
SAN FRANCISCO, CA - JUNE 04: A job seeker meets with a recruiter during a HireLive career fair on June 4, 2015 in San Francisco, California. According to a report by payroll processor ADP, 201,000 jobs were added by businesses in May. (Photo by Justin Sullivan/Getty Images)

More than one person is having a bad day at Timeout New York. Not only is their photo desk totally overworked, but whoever posted the opening for the position they desperately need to fill has officially goofed. It seems they've simply copy and pasted an email describing why the position needs to be filled, and has everyone on Twitter worrying about Melissa.

Job hunting is a huge pain.

Having to tailor your resume to each job's requirements can be a time consuming task. And plenty of job applicants just wish they could get inside the recruiter's head to know exactly what they're looking for in a candidate.

So, if you're a photo editor, you're in luck.

In this extra-long job posting, we hear the woeful tale of Melissa, who is totally overwhelmed for lack of qualified freelancers. And the posting flatly explains that the position is being created to prevent her from leaving. It's clearly an email some poor HR kid copy and pasted into a posting without thinking, but it's a great inside look.

And it has people shocked.

Jaws collectively dropped as the posting went further and further into detail about the chaos that is the Timeout New York photo department. And confusion mounted as people wondered just how on Earth someone would hit 'submit' on this after entering it.

It gave people a whole new respect for photo editors.

Who knew wrangling freelancers could be such an insurmountable task. Not to mention the dearth of talent in a world where it seems just about everyone has access to professional camera equipment.

People were quick to rally around Melissa.

People felt for the poor, overworked Melissa, and they took to Twitter to voice their concern. And also, of course, to give Melissa credit for holding out this long, all while apparently doing a good enough job that the magazine would hire a whole new person just to keep her happy. But that wasn't all...

It sparked some bad memories for people.

Turns out there is no shortage of people who know exactly what it feels like to be trapped in an overwhelming job. A job at an actual magazine where no one apparently even has time to proofread a job posting before it goes up.

People had other suggestions for ways they could keep Melissa happy.

Anyone working as hard as Melissa has been clearly deserves some major rewards. So why not, in addition to a fat raise, she get an enthusiastic, desperate young person to follow her around with hot coffee everywhere?

There was even an attempt to start a movement.

While the hashtag itself didn't catch on, several people were ready to take a stand in her name. Could Melissa be the next Bernie Sanders? Or is her fifteen minutes of fame over already? As long as she eventually gets a lunch break, it's fine either way.

There's also the question of the salary for the new employee.

Whoever they are, here's hoping they have nine roommates and a crate of ramen nearby. Because this is not much to live on in one of the most expensive cities on Earth. Though from the sound of the ad, you might not even need a place to live, since it seems they rarely get to go home.

Many also observed that this job posting will likely turn candidates away.

The post paints an incredibly bleak picture of life at the magazine. And anyone who isn't absolutely desperate might see it as a sign that things maybe aren't as fun behind the scenes of the popular publication. Though we'd certainly love the opportunity to buy Melissa a drink at the next office happy hour. So what was the fallout at the actual office?

But then the hours of Twitter enjoyment came to a sudden end.

Someone finally realized their horrible mistake, unfortunately well after it had gone viral. Or maybe, just maybe, the position was filled. Let's hope it's someone who'll be good to our new friend Melissa.