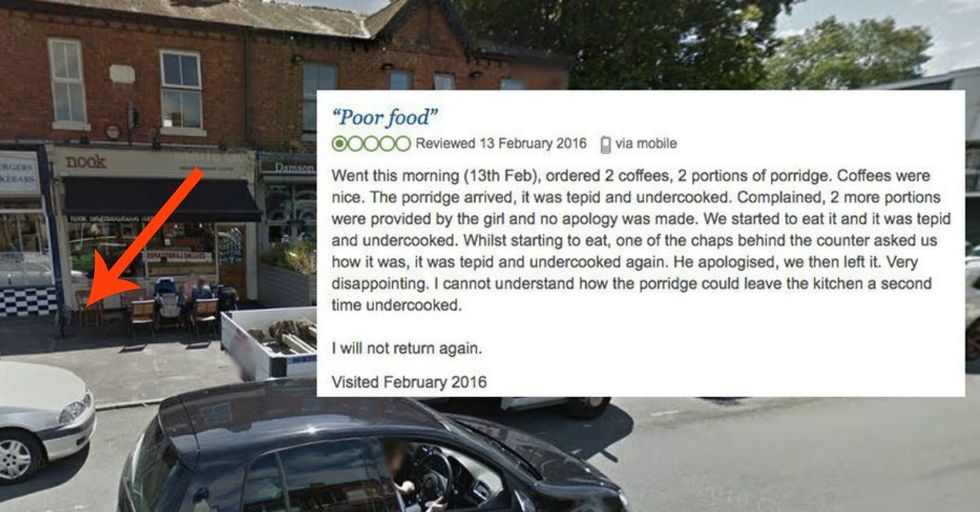 What do you do when you get an unfairly bad Yelp review?

You spin it, of course!

Online reviews are very important to small businesses, especially those like Nook Neighbourhood Coffee, a café in Stockport, UK.

But with those high stakes come drastic reactions to bad reviews.

We live in an age where a lot of people expect the crowd to do their research for them.

And why wouldn't they? It's easy, and you can see a lot of different opinions if you put in the time.

Obviously, there's a flip side to that coin.

Getting bad feedback from a critic is one thing. But when everyone's a critic? Yikes.

You get vindictive people who aren't interested in the truth, but their own weird agendas.

THAT'S unfair. Not only does it hurt feelings (It really does), but it can hurt or even shut down businesses.

Most people realize this, and maintain objectivity in their reviews, knowing livelihoods hang in the balance.

But what happens when someone crosses the line? One coffee shop went on the offensive after getting a salty and groundless one-star review. See what they did.

Unfortunately, a female customer who was less than thrilled with her porridge (think Goldilocks) left a 1-star review on TripAdvisor.

I mean, is there even a DIFFERENCE between good porridge and bad porridge?

Some think so, apparently. So they share their experience with the world.

Nook had an interesting reaction. Rather than apologize, they decided to embrace the huffy review and run with it.

The above picture was taken by a passerby and posted on his Instagram account, and since then, it's gone downright viral.

This isn't the first time Nook has used their sign creatively.

As for the review itself, Nook's manager Arlo Calderbank told the Manchester Evening News that he was trying "to do something different," even if "the lady's comment was quite disappointing because we try to provide the best service at all times. Seeing the comment pop up on TripAdvisor was a bit of a shame." Turns out, Nook even gave her a refund that she failed to mention in her review.

Calderbank went on to say that the café normally receives positive feedback, but people occasionally not liking the food "is part of it all".

Arlo told the Manchester Evening News, “I check what’s being said on there every day. We do genuinely take all comments seriously. It’s really useful to see what the customers have been saying and to take on board feedback." And at the end of the day, a positive reaction to a negative situation probably gave them better publicity than they normally get from a positive review. We'll chalk that up as a win! Is this the best sign you've seen outside of a store? Don't answer that until you've seen these!

They're less divisive, but can be every bit as funny.

These may be the one creative outlet some servers and baristas get all day.

So they make the most of it.

They're often little gems of pop culture wordplay, trying to make less of a statement. Rather, they just exist to get a laugh.

What they lack in practical applications, they more than make up for in getting passersby to smile.

Which could lead to a little business, if only out of curiosity.

This one's got a point.

Might as well have fun if you're going to be unproductive.

Restaurants don't have a lot of recourse against a bad review.