This Campsite Riddle Has the Internet COMPLETELY Stumped | 22 Words 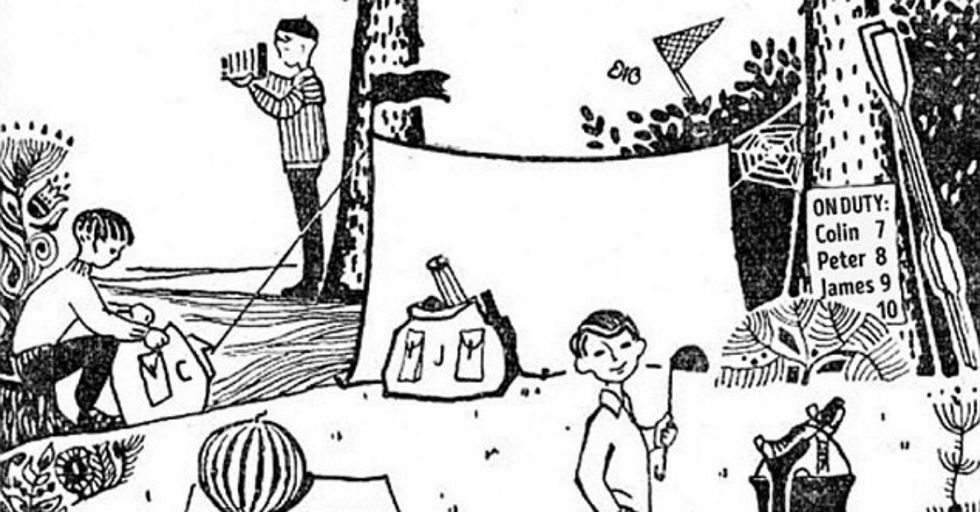 This Campsite Riddle Has the Internet COMPLETELY Stumped

Today's edition of "It looks so simple but I still can't figure it out" comes in the form of a cartoon campsite image, that sources say came from an old children's magazine. At first the answers seem completely obvious, until you see the actual answers and then realize you totally feel like a dope.

And I have to admit that I wouldn't have gotten the last question right if someone was waiting to pay me $1 million for the correct answer.

Start by carefully looking at the picture below:

Now, try to answer these questions:

Are you ready for the answers? Let's get down to business.

There are four tourists.

Four spoons on the picnic blanket and four names on the duty list.

They arrived a few days ago.

A spider web has appeared between their tent and a tree in that time.

They got there by boat.

Hint: Note the oars by the tree.

No, a village is not far.

There's a chicken wandering around, hopefully staying away from that pot on the campfire.

The wind is blowing from the south.

A flag that shows the wind direction is on top of the tent. (To tell which direction is which, look at the branches — they're normally bigger on the southern side of trees — if you're in the Northern Hemisphere.) Yeah, I had no clue either.

Take the answer from question five to figure out east and west then work out the time based on the shadows.

Because we're asked where Alex went, we can assume he's not visible in the picture. A butterfly net, however, can be seen behind the tent. So the answer is that he's gone to catch butterflies.

Colin was on duty yesterday.

To figure out who was on duty yesterday first consider that Colin, Peter, James and Alex are staying at the camp. We know that Alex is catching butterflies and the person taking photos must be James, as there's a tripod sticking out of the bag marked J. The person looking through the backpack is Colin as it's marked with a C. That means Peter must be the one standing by the cooking pot. If Peter is on duty today, then according to the list on the tree Colin was on duty yesterday.

Are you ready for this? According to the duty list it's the 8th of the month, but what month? The solution lies in the watermelon on the picnic blanket, but you would have to be aware that August is the month in which watermelons ripen to find the correct answer. I KNOW. So hard. How many of them did you get right?