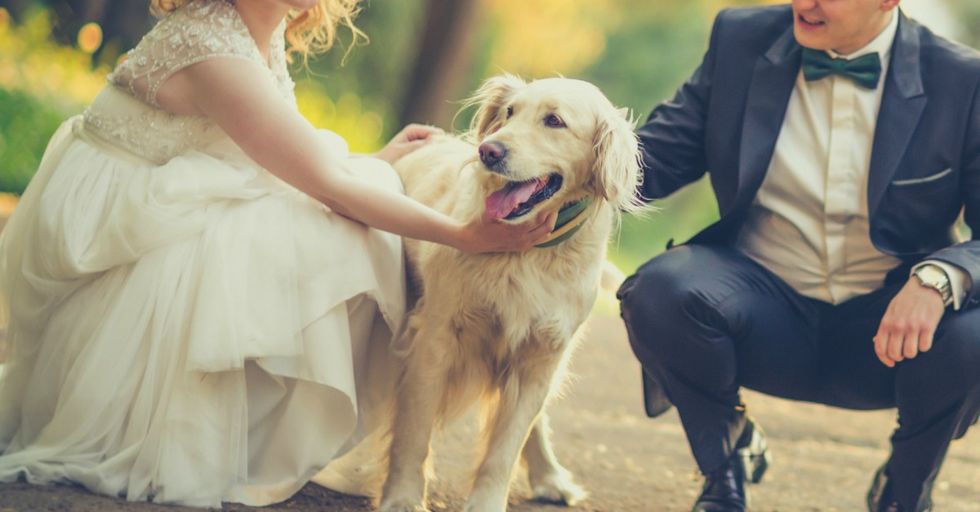 Dogs are many things – our best friends, snuggle-bugs, resident shoe-destroyer-in-chiefs. But did you know they can be wedding crashers too?

Last month, longtime Brazilian couple Marília Pieroni and Matheus Gomes Martins finally tied the knot. It was supposed to be an outdoor ceremony, but then the rain came, and with it, a very special guest.

It was a stray dog with muddy paws and wet fur. Not the ideal guest for a wedding. People tried to get him to leave, but he just kept coming back. As Pieroni told InsideEdition.com, "People could not get him off the premises."

When the ceremony started and the bridal march began to play, the dog came out first. By then, Pieroni, an animal lover, had already decided to just play along. Then came the best part ever.

“At the moment of the blessing of the covenants, he went to lay on my veil to sleep," Pieroni said. "We think it's really cool to see the innocence of this little animal." Cool? Or gangsta...

The doggie wedding crasher stuck around for some food during the reception, but after that, he disappeared. That wasn't the last of it, however.

The newlyweds were taken by their furry wedding guest, so they decided to adopt him, and asked the neighborhood for his whereabouts.

On October the 10th, Snoop came home to his new family.

“We decided to adopt him because we knew he was an animal that lived on the street," Pieroni said. “Today he is super good, happy, feeding properly, going out for a walk and we are even happier." Aww...