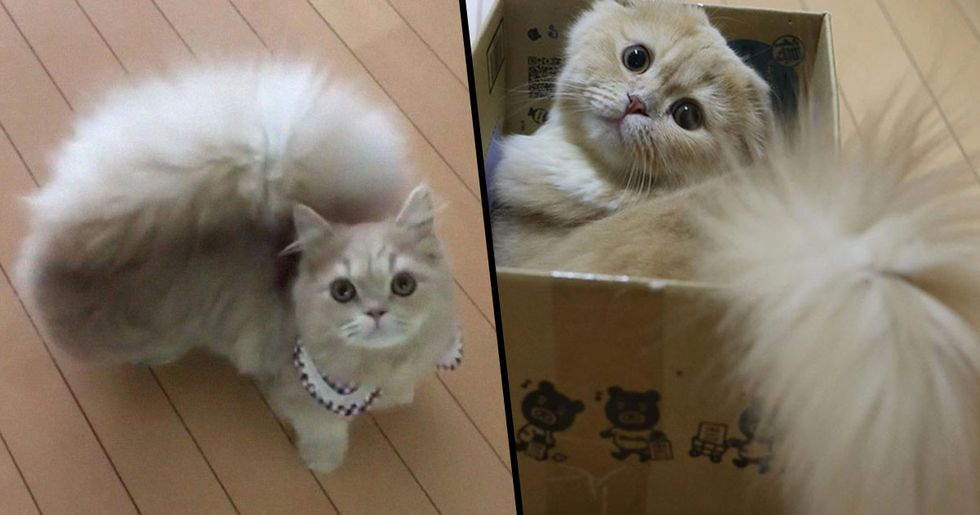 Cats are basically the cornerstone of the internet. Wherever you look, it seems there's always a feline doing something cute. And for cat parents, there's nothing that your kitty could do to make you love them less. Am I right?

We've seen a fair share of Instagram-famous cats from Bocco to Zelda, and now it's time to make way for Bell, the fluffy-tailed cat who's literally made everyone fall in love with her.

Keep scrolling to see the most adorable video of her.

Let me introduce you to the most recent feline that's taking the internet by storm.

Say "hello" to Bell, the cat with a tail that perfectly resembles the one a squirrel has.

Isn't she just the cutest?

Her owner is called Rico.

With over 150,000 followers on Instagram, you could say that this little kitty, along with her friends, is one of the most popular pets on the internet.

Can you resist those eyes?

And look at that fluffy tail!

I wonder how she gets it so bushy?!

Bell currently lives in Japan with her owner.

And just seeing the videos of her and her pals causing mischief brings us happiness.

She is part of the Minuet breed.

Minuet cats are also known as Napoleon cats, which means she is a mix of the Persian and Munchkin breed.

The breed is known for its bushy tail, as you can see.

They also have short legs, round faces, and an extremely furry coat.

Even though it may seem as if they are hindered because of their features...

They aren't. They can jump, run and play around like any other breed of cat.

They do have a few minor health-related problems associated with the breed...

But overall they are pretty healthy cats! And they're cute!

If you're in the mood for more cat content, then keep scrolling!