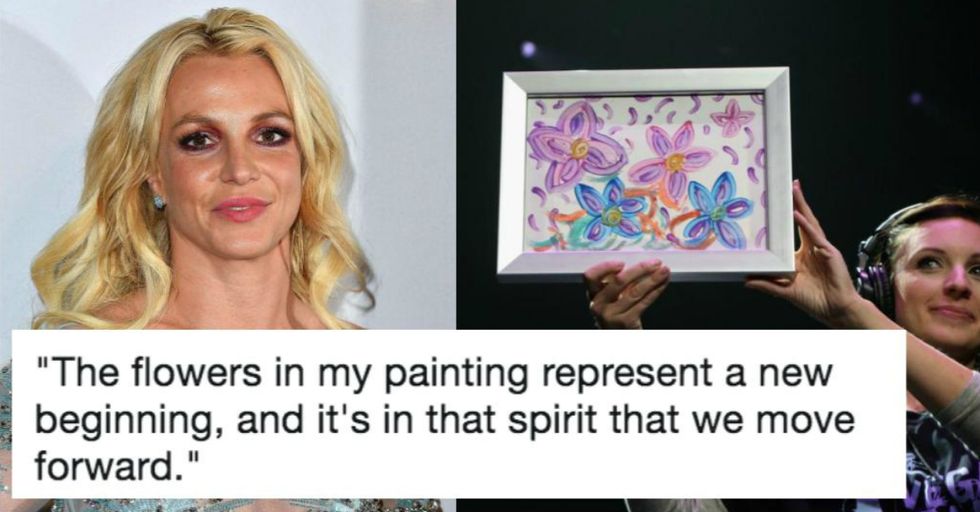 A couple of weeks ago, Britney Spears shared a video of herself. The pop princess was positioned on the balcony of her house, knee propped on a (probably very expensive) stool, paintbrush in hand. At first glance, she looked like she was painting, but not painting the way we normals do it. She looked like a straight up Italian Renaissance master with a couple of apprentices staring in awe from the background.

Of course, this didn't mean we thought whatever Brit was making was going to be a masterpiece.

This is Britney Spears, after all. Reigning pop princess for years and years and years. Spears knows how to entertain and has spent decades perfecting her craft, but her craft is definitely not painting.

We didn't however, expect the result of her endeavors to be THIS:

Yes, after all that hype at the beginning of the video, this is what Spears painted. It pretty much looks like every preteen girl's doodle back in the years Lisa Frank was popular. In fact, this painting looks very Lisa Frank-ish, minus the eye-searing neon palette.

So Spears' painting, while a strong effort, is not a masterpiece by any means.

That didn't stop one intrepid celebrity from buying it, however. That's right, Robin Leach, the nasally voice behind celebrity-gazing show Lifestyles of the Rich and Famous shelled out BIG bucks to get his own Spears original.

Just how much cash did Leach drop, you ask?

$10,000. That's right ten thousand dollars. To be fair, Leach bought the painting from Vegas Cares, an auction to benefit victims of the Las Vegas massacre. He was the auctioneer for the event and couldn't resist getting in on the action.

You can pay rent for the entire year for $10,000. You can buy like, ten iPhone Xs for $10,000. You can probably almost pay off your car for $10,000. It's definitely a big chunk of change. Then again Leach just might have the right idea. A signed note by Einstein just sold for one $1.6 million. Britney Spears is no Einstein, but — lest you forget — she defined an entire era of music for some people.