This Child, Suffering From a Rare Genetic Condition, Is Known as the 'Baby Hulk' | 22 Words 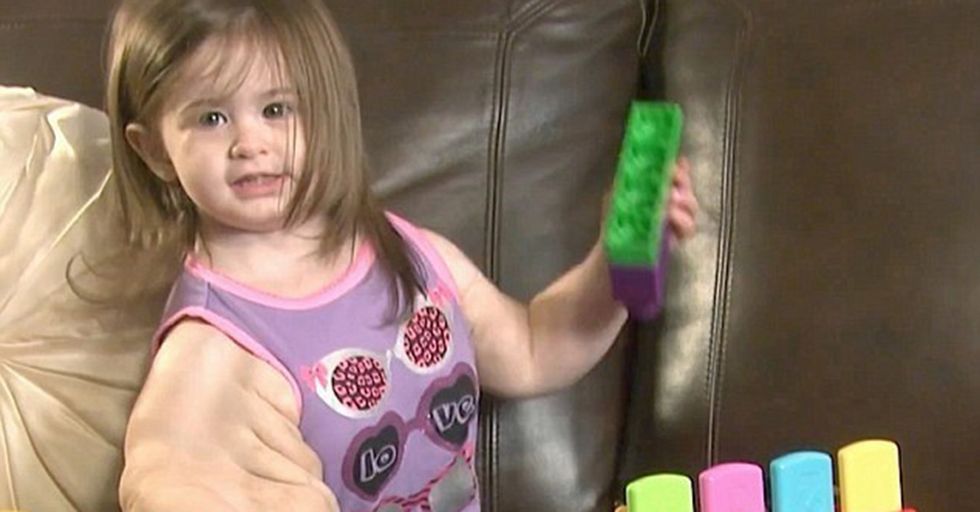 This Child, Suffering From a Rare Genetic Condition, Is Known as the 'Baby Hulk'

There's nothing funny or entertaining about seeing a child suffer through a birth defect.

Or a debilitating condition, for that matter.

Curiosity, not ridicule, is very normal.

When a nickname is bestowed upon a child by the public, it may be done for a number of reasons.

It might be a term of endearment or it might be one of crass promotion. But the medical curiosity can still be real.

No doubt when you hear then name "Baby Hulk," your mind races.

That's understandable. One baby was bestowed such a name with good reason.

That said, the affectionate nickname, meant to convey strength, was born from unfortunate circumstances.

However, there's an inspirational outcome to this tale, so hang on.

When Joni Gatlin went in for a pregnancy scan at 15 weeks, the doctors saw some irregular fluid buildup, but figured it was too early to make assumptions.

But when Joni's daughter Madison was born, it was clear that she was not like other kids. See her story below!

It's a condition known as "cloves" which causes lymphatic fluid to build up in the arms and chest. It affects only 200 people in the world, making it an extremely rare condition. The doctors knew that without treatment, the swelling would continue to grow...

Madison's parents gave her the nickname "Baby Hulk" after they told some young boys that the Hulk was her dad.

The kids thought it was the coolest and were actually impressed by Madison's condition, so the parents just kept on using the nickname. Joni said, “Her nickname started during an instance where twin boys asked me what was wrong with her, I told them her daddy was the Hulk and they thought it was the coolest thing ever. After I told them she was the Hulk's daughter they wanted to be her best friend."

Joni's aware that her daughter might get glances from strangers, but hopes that it won't affect the way people who interact with her treat her.

“I don't want people to be scared of my daughter, there's nothing wrong with her, she just has a gene malfunction." “I've told younger children she's a baby Hulk because I don't think they would understand the condition, and at least this way, they aren't scared of her and don't treat her differently. You have to try to have a sense of humor with something like this."

The parents had no idea what to do when Madison was born. They weren't aware of the disease and were taken aback by her appearance at birth.

“When she was born she looked like a cute little blob with legs. We believed the mass weighed 3 lb. Now I think it's around 5 lb."

They're treating the symptoms now, putting her in compression clothing and draining the fluid twice per day.

Slowly, the fluid is drained and replaced with saline.

The condition is ultimately treatable.

Once the swelling goes down to a certain size, it will be treatable through surgery. The family is low on funds, so they've turned towards crowdsourcing to help raise the money necessary for her treatment. Here's the link to the family's GoFundMe page, which has a target of $5,000. With everyone's help, they can treat this disease and get Madison running around soon after!

Mom and daughter continue to fight.

Madison's brave face could serve as an inspiration to all of us, no doubt.

If you've going to be compared to a fictional character in a fight, you could do a lot worse than the Hulk, for sure.

To see more of Madison, check out this video feature on her!