This Chinese Vlogger Transforms Into Celebrities Using Only Makeup | 22 Words 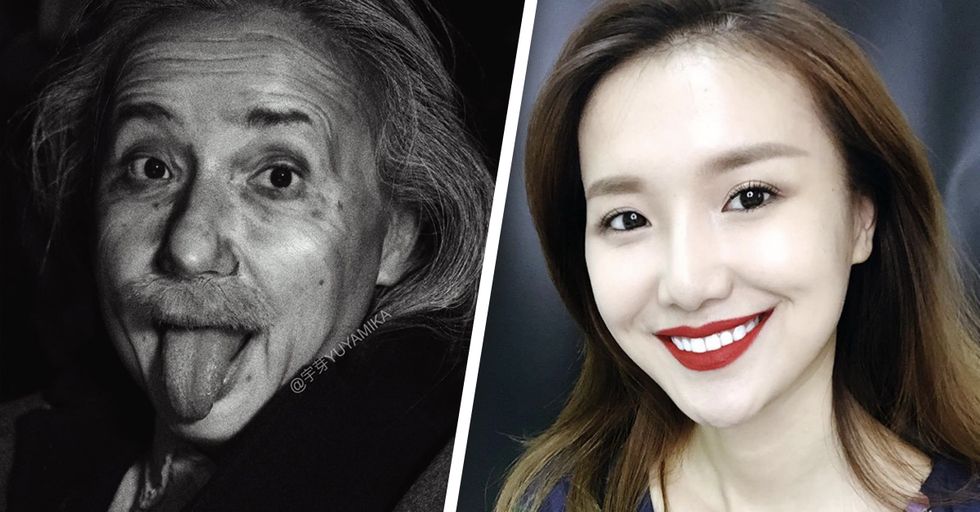 This Chinese Vlogger Transforms Into Celebrities Using Only Makeup

Makeup means a lot of different things to different people. For some, it's a way of highlighting their existing features and making them feel more polished and ready to take on their day. For others, it's a way of completely transforming their looks, escaping from their own identities and taking on a completely new one. Of course, you have to be an extremely skilled makeup artist in order to pull this off effectively, and it can take years of practice to be able to perfect these techniques. He Yuhong, a Chinese make-up blogger, has been taking the Internet by storm with her mind-bending creations. How does she do it? She offers a small glimpse into her process, but she can't reveal all of her secrets, right?

These photos and videos show off her incredible talent. And while it may be hard to believe, I assure you that no photoshop has been used in these transformations. Just 100% talent!

She's a 28-year-old Chinese blogger who's making quite a name for herself online.

Why all the followers, you may be asking yourself? What's all the fuss about?

Well, for one thing, Yuhong has four insanely cute cats.

And she often makes adorable DIY cat-inspired craft videos that her followers can re-create at home. But what really has people raving are her celebrity transformations.

And here she is as Lady with an Ermine by Leonardo da Vinci.

If it weren't for that second photo of her kissing her hand, I would have sworn this was the original painting!

Here's a video where she shows her followers a little bit of the transformation process.

Yuhong left her job as a teacher to become a full-time makeup blogger. The decision to leave a stable career and focus 100% on her craft was a tough one, and she doubted herself at first.

Her transformation into Mona Lisa was when people really started talking about this talented artist.

"I wasn’t sure how internet users would feel about me trying to copy such a famous and beloved painting onto my face," she told South China Morning Post. “I prepared myself for criticism."

Here's an inside look at how she becomes The Girl With The Pearl Earring.

"The response is just overwhelming," she told The Daily Mail. "I appreciate all the support I've received and I'm so happy that viewers like the transformation."

Yuhong's love of classical paintings is what first inspired her to take on these challenges.

"I love oil paintings myself," she said. "So, when I saw the great response on the Mona Lisa video, I went on to create Lady with an Ermine to continue the Da Vinci theme."

Here she is as the old Hollywood darling Audrey Hepburn. She truly is a human chameleon!

And here's He as Lily Collins.

...although I would say this makeover is also almost identical to Gal Gadot. Wouldn't it be nice to look nearly identical to not one but TWO of Hollywood's greatest beauties?

Can you name this famous redhead?

That's Scarlett Johansson as her Black Widow character, also known as Natasha Romanova. If these two were standing side by side, I honestly don't think I'd be able to pick out the real Scarlett.

Harley Quinn, is that you?

Yuhong says the response from her fans is what drives her to tackle new and more difficult challenges. "I'm happy to see that people like my recreation work. I'm greatly encouraged by their positive feedbacks," she told Xinhuanet.

"Some of the fans never made up their faces before, while others are men, but they all show great interest in my videos."

"They keep me moving forward," she added. Oh, and if you couldn't already tell, here's He as Dita Von Teese.

This one actually kind of freaks me out. I wonder if Taylor herself came across this photo and thought for a minute, "I don't remember taking this one..."

She makes it look so easy, doesn't she?

Yuhong has said that most of her recreations take around six hours to complete. That's some major dedication!

Can you name this iconic Italian actress?

It's Monica Bellucci, who's appeared in such famous films as Spectre, The Matrix Reloaded, and Bram Stoker's Dracula.

Think again! Here she is as a pitch-perfect Joachim Löw, the German soccer coach and former player.

Here's a look inside the process of transforming into this famous football star.

And yes, the nose-picking at the end is greatly appreciated. Seriously, how does she DO that?!

Who's this handsome fellow, you may be wondering?

Why, it's none other than Cristiano Ronaldo, the Portuguese soccer player and total heartthrob. She even has his exact smile down and everything!

And no, I didn't just insert one of Einstein's most iconic photo here.

This is yet another one of Yuhong's mind-bending recreations. The attention to detail is truly spectacular.

If you've ever doubted the powers of makeup before, these pics and videos are sure to change your mind forever.

She not only perfects these famous faces with makeup, she's somehow also able to reproduce their facial expressions and mannerisms, as well.

Not only is her Instagram exceedingly popular, she also has a YouTube page where she posts even more epic recreations.

It currently has nearly 19,000 subscribers, and she posts new videos every day or so. Subscribe to her channel here!

This one might take the cake for the most jaw-dropping. If I could figure out how to contour like that, maybe my face wouldn't constantly look as flat and round as a pancake...

Sure, it's nice that she shows us a quick DIY, but there's no way we're re-creating this look at home.

If I can't even master a smokey eye without looking like a raccoon, there's no way I'm pulling this off. Although it would be nice to be able to get the star treatment once in a while. I wonder how many free meals and VIP concert tickets He's been able to score with these recreations.

With each new transformation, Yuhong is able to hone her craft and fine-tune her skills.

"Once you see your face as a blank sheet of paper, the opportunities are endless," she said in a message accompanying one of her videos. The sky's the limit for this talented artist!