This Chinese Zoo Will Pay YOU To Cuddle Pandas | 22 Words 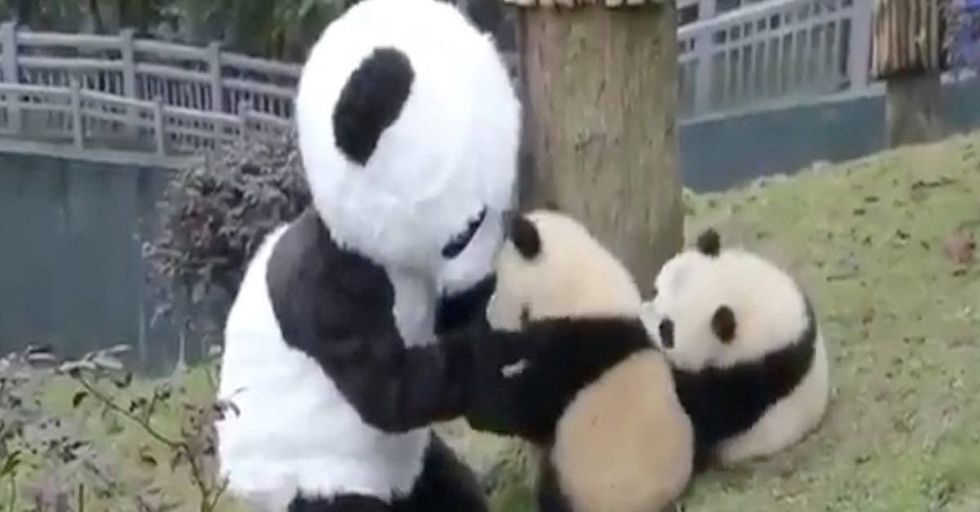 This Chinese Zoo Will Pay YOU To Cuddle Pandas

Everyone (and I mean everyone) loves pandas. They're giant, cuddly creatures, but they can also be very temperamental to the point of being difficult.

In an effort to help panda cubs live without humans, a zoo in China is enlisting lucky volunteers to dress up in giant panda costumes and cuddle with the black and white critters. If that sounds ridiculous to you...it is.

Check out the adorably weird pictures below.

The Internet has lost their collective minds over this video of a man in a panda suit.

Does it look about as amazing as you pictured it would? It's not fooling us, but these pandas are none the wiser.

Naturally, everyone is wondering how they can get this job.

Can you blame them? Who wouldn't want to get paid to cuddle panda cubs all day?

Unfortunately, the supply of panda cuddlers might outweigh the demand.

Seemingly everyone has volunteered for the position, and, as you might imagine, there aren't a whole lot of positions to fill.

Even soccer mascots are ready to step up and do the job!

Unfortunately for Mr. Paisley Panda, Scotland is a far cry from China. So unless he's planning on racking up frequent flier miles, he's probably out of luck.

People have even started bringing their own suits to audition for the gig.

That's a little terrifying, and perhaps over-eager. But you have to admire their enthusiasm. I mean, "Dress for the job you want," right?

Twitter has already started turning the pandas into memes, because, of course it has. That's what Twitter does.

Because we all know the Internet's favorite thing is memes. Well, maybe next to pandas. OK. It's a tie.

This guy is asking the hard hitting questions. It's important to sort these things out beforehand.

And how do you wash the panda suit? Will the dry cleaners give you a funny look when you drop it off?

His suit wasn't quite right. He get's an "A" for effort though. They should keep his resume on file in case something opens up in the Tiger Department.

Other, less social humans are looking to get the same treatment.

We can't all be as lucky as panda cubs unfortunately.

And as with everything else that happens in the world...

The Simpsons predicted it first.