This Christian Window Decal Is Going Viral. Once You See It, You’ll Understand Why. | 22 Words 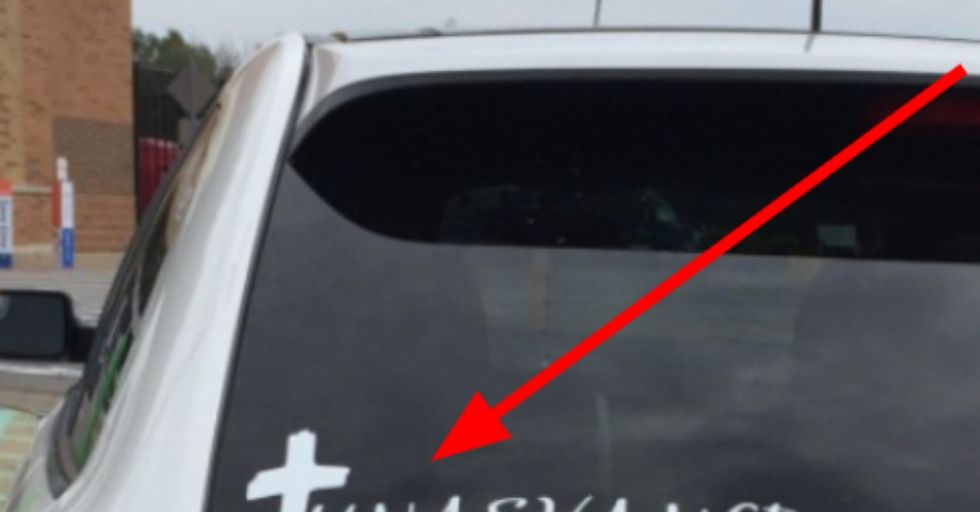 This Christian Window Decal Is Going Viral. Once You See It, You’ll Understand Why.

From stick figure families to "baby on board" signs, even the best intentioned window decals are kinda corny. But there's no way you've seen one quite this confusing and absurd. We're going to bet you've never seen a religious window decal quite like this before.

This is the story of the viral sensation that is TUNASHAMED.

As you know, the tuna is a majestic sea creature.

They're giant fish who grace the ocean waters in glorious, shimmery schools.

They also taste great on a sandwich.

Or as steaks. Or on a salad. Or in a poke bowl. Or in a sushi roll. Yeah, tuna is really delicious.

But what do they have to do with Jesus?

A lot, actually. Thanks to a religious-themed bumper sticker that recently went viral, tuna are now the most Christian fish in the sea.

Take a gander at this poorly-designed window decal:

How long did it take you to realize that it doesn't actually say "TUNASHAMED"? In case you didn't notice, it's actually a cross with the word "unashamed" next to it. Yeah, we know. It's very hard to tell.

Well, you're not alone.

When Twitter user @the_blueprint posted TUNASHAMED, we all scratched our heads. We all read it out loud, looked at it sideways and backward and wondered why someone with tuna would be shamed. Many had hilarious reactions to it...

"Across from where?" Maeby asks. There really is an Arreseted Development GIF for everything.

Some people weren't so quick on the uptake.

All in favor of changing the pronunciation of "unashamed" to "oona-shamed"? AYE!

Others seemed to actually understand the concept of TUNASHAMED.

It is true. That tuna looks super gill-ty. Get it?!

Of course, perfectly fishy puns arrived in the responses right away.

Many jumped in to defend tuna right away.

It does seem like tuna got the short end of the fish stick in the TUNASHAMED debacle. Luckily, @watching_crows came out strong with "TUNA PRIDE."

@PaddlingOtaku wants you to know that tunashaming is no joke.

We don't know exactly what tunashaming entails, but we bet it's on par with that Game of Thrones scene where Cersei's made to walk naked through the streets. Only more tuna-y, of course.

This tuna is very clearly unashamed:

As well he should be. Tuna fish deserve our respect.

Even the king of "Too Much Tuna" himself, Nick Kroll, got in on the action.

Kroll and John Mulaney's "prahnk" show, "Too Much Tuna," makes them the experts on tuna. And shame.

"I've tried to stop laughing. I cannot," says @QuinteFan. Yeah, neither can we.