This Clever Girl Created a Fake Starbucks Drink, Then Trolled Her Friends With It | 22 Words 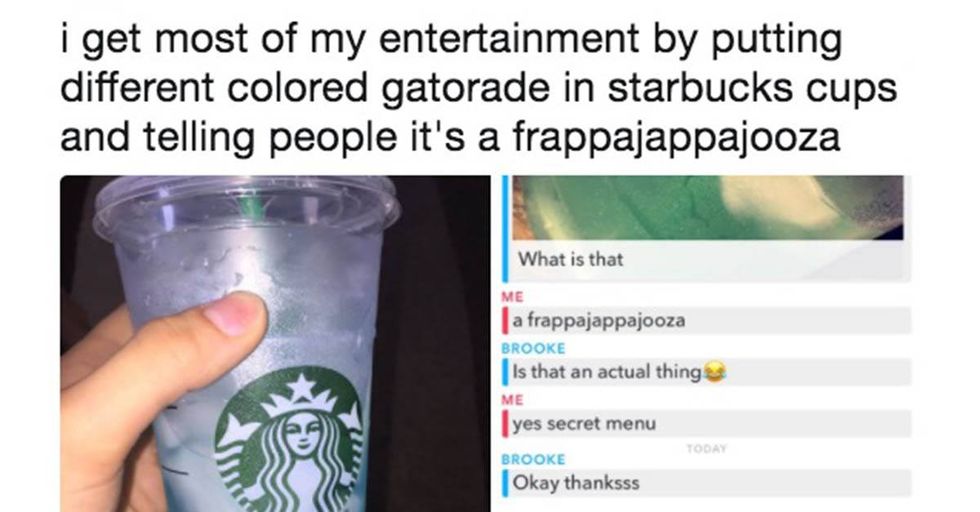 This Clever Girl Created a Fake Starbucks Drink, Then Trolled Her Friends With It

By now, anyone who has spent much time online has heard about the legendary "secret menu items" offered by the likes of Starbucks, In-n-Out, and Chipotle.

People are so quick to get in on the "secrets" that they're willing to believe just about anything.

Laylah's a 17-year-old high school student who's got a bit of a sinister sense of humor.

Don't let the sweet face or nerdy glasses fool you. This girl's devious.

She stepped into a Starbucks just to get a big glass of ice so she could drink cold Gatorade.

She thought the drink looked cool, so she posted it to Snapchat where it became a whole big...thing.

She told her curious friends that it was a (let me get this spelling right) "Frappajappajooza."

The friends weren't familiar with that drink with the odd name.

That's because it's on the "secret menu."

It's almost too perfect. I don't know if people have ordered it, but considering how viral this has gone, Starbucks might just have to start carrying it.

Sure, people are really gullible, but something about this prank is just hitting the right spot with people.

Maybe it's the name. Or the fact that "secret menu" items are so silly to begin with.

Sounds like someone is due some cash for calling this one.

Who would have thought the Frappajappajooza would be such a hit? Even Laylah would be shocked by how this played out. Maybe she'll get to name a REAL drink once all this dust settles.