Whatever your opinion of the colander hack is, at least we've learned something. | 22 Words 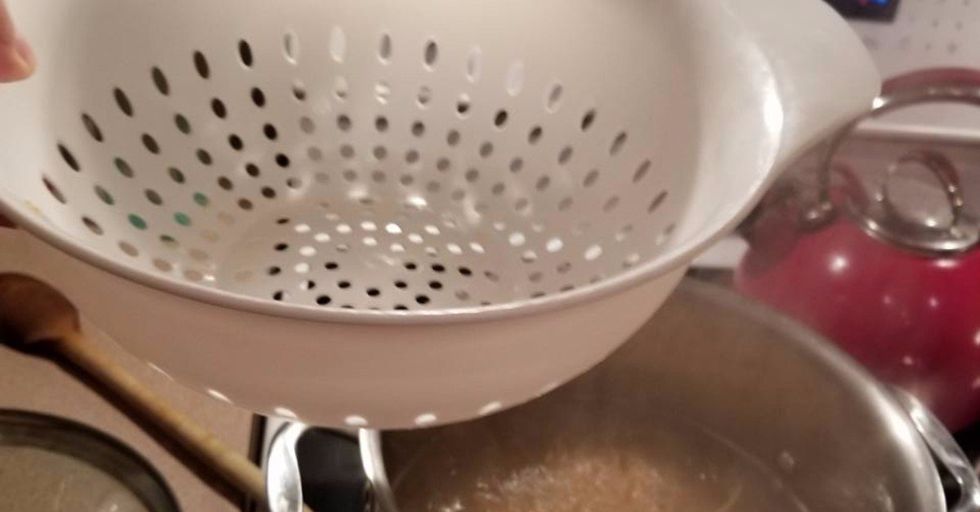 Have We All Been Using Colanders Wrong Our Whole Lives?

Sometimes you see a life hack and it truly blows your mind. You take a minute and wonder, "Why didn't you think of that? I've been doing it wrong or the hard way your whole life!" Other times, you see a so-called hack and think, "Um, that's just plain stupid." But when everyone else is going nuts over it, are you missing something?

Recently, a colander hack has gone completely viral because it hits a sweet spot between genius and stupid, and it's divided the nation in a way we haven't seen since the white-gold/blue-black dress debate.

He is now enjoying the internet fame that accompanies an incredibly viral social media post. One idea, one colander, one pot: a semi-revolutionary idea that's taken off like only something silly can.

It all started with a series of photos of a different, "better" way to use a colander.

Wenita had an idea, took some photos, and posted them to Facebook. The simple idea he proposed has been shared nearly 127K times on Facebook alone, and has garnered over 16K comments.

It really took off when Twitter user Daibella shared it.

Daibella's mind was blown. Is it ingenious? Have we all been draining pasta incorrectly? Was this "improvement" necessary?

Sometimes the line between stupid and brilliant is so fine that we can't find it. This clearly is one or the other, right? I mean, it has to be something. It can't possibly be a lateral or slightly worse change to colander use. Either this is life changing or absurd.

Would you need a specific colander for each pot you own? There are SO many questions!

Can it possibly really work one handed? Wouldn't the whole thing slip? Aren't you going to get steam burns? Hot wet pasta is slippery, pots full of boiling water are heavy, how could any of this possibly work? But, most important question of all: WHY?

Internet users around the world are confused.

Love it or hate it, this post has taken off, putting it in rare company. Few posts reach this level of coveted social media engagement. Think: Lady with the Chewbacca Mask, or 4 year old Befriended Old Guy in the Supermarket. What is it about this colander thing that is grabbing our attention?

Even celebrities are weighing in on this. Giada FREAKING De Laurentiis even gave her two cents!

"[It's] a tad bit risky and dangerous if you don't have a perfectly fitting strainer and pot combination," was the Food Network star's opinion. And at least half of the internet world collectively thought, "DUH!" The other half? Still baffled that they've been doing it "wrong" their whole lives.

The general consensus seems to be that this is about as useful as a beard bowl of ramen noodles.

If it ain't broke, don't fix it. Pouring pasta into a colander works and is not a problem that needs fixing. When a hack doesn't actually make anything easier, it's not really a hack.

Genius idea or not, Wenita seems to be enjoying the ride.

A sizable army of Wenita friends, family, and new fans are now tagging Ellen Degeneres to get Wenita on the show. If Ellen Degeneres mentions your Facebook post, you have arrived.* #lifegoals *If arriving means that you will have exactly 15 minutes of fame for something very unimportant in the grand scheme of things.

This "great" colander hack got us thinking about some other great hacks.

Problem: I have a beer and only a banana with which to open it. Ah, a common problem.

Solution: There isn't one, because that isn't a thing. Eat the banana and open the beer any other way. (But weren't you hoping for a cool trick?)

Problem: Dad doesn't know how to put kid's hair in a ponytail.

Solution: NEVER EVER EVER suck your daughter's hair into the nasty vacuum, you idiot! Actual solution: Either try to do a ponytail the best you can, or don't put your kid's hair up in a ponytail.

Problem: I have a raw sausage and I want a cooked sausage.

Solution: Hmmm, this is a tough one. Do I cook the sausage? Or tie to up to my hot water faucet with string and just run hot water over a portion of it like an ineffectual idiot?

Whatever your opinion of the colander hack is, at least we've learned something.

I can vouch for this one personally. I never knew that I didn't know how to spell colander until the writing of this post. I typed it wrong 100% of the time, even after repeated corrections. Oh, I guess that means I didn't learn something after all. Another flaw in this life hack. We have learned nothing.