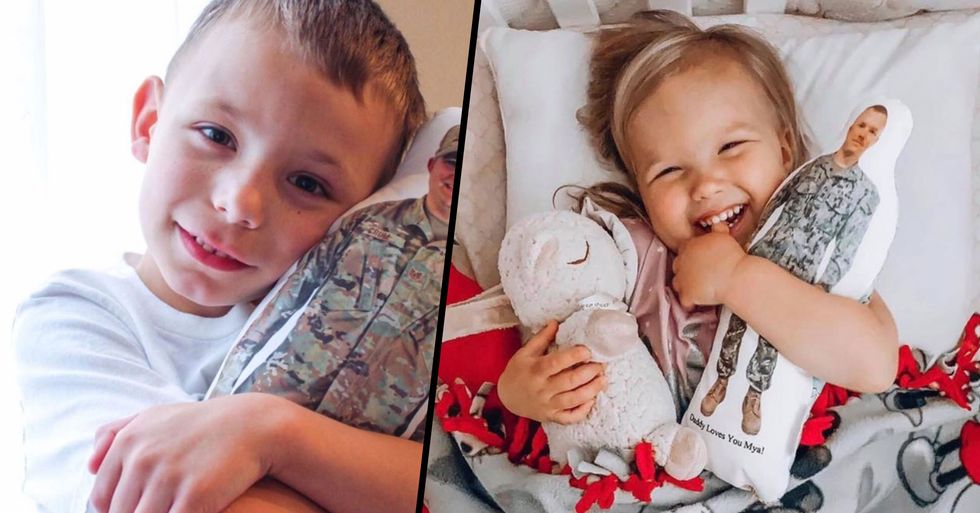 It can be hard when anyone is apart from family members for a long time.

Especially for small children who have parents that have been deployed.

One company in North Carolina has created a product aimed at helping children with the separation from deployed parents.

It is just the cutest thing...

Growing up as children we often have a favorite teddy bear or soft toy.

One that will bring us comfort and reassurance.

The same reassurance that our parents bring us.

But for children whose parents have been deployed this can be a struggle.

So one woman has thought of a genius idea to help children combat that.

Tricia Dyal started Daddy Dolls 15 years ago with a friend.

They started it in order to create 'Hug-A-Hero' dolls.

'Hug-A-Hero' dolls feature an image of the child's hero on one side and fabric on the other.

Or alternatively, buyers can choose to have the doll two-sided.

The inspiration behind the dolls came from Tricia's aunt.

Her aunt made a special daddy doll for her daughter during the time that Dyal's husband was deployed.

A special idea that she decided to continue so that other children could also benefit from it.

On the Daddy Dolls website, it is explained why the company started stating, "We started Daddy Dolls after witnessing first hand how hard military deployments were on our children.

"With both of our husbands being Marines and both having been deployed twice in less than two years, the absence of daddy was beginning to take its toll on our own children as well as those of dear friends."

It also goes on to explain why they opened it up to everyone.

"After seeing the amazing response from our own children, we realized that there were many children out there, not just military, that could use a doll of that special someone that was far away. Our children not only play with their Daddy Dolls, but also rely on them for strength during trying times like doctor's visits or when they need an "owie" kissed."

Tricia started a giveaway on the Dyal Studios Facebook page a couple of weeks ago, where people could win a 'Hug-A-Hero' doll.

The giveaway came just after many North Carolina troops were deployed.

According to The News & Observer, Dyal said that with the increased need among families in the area, her studio started a drawing to give away one doll a week to a local family for 12 weeks.

But the company has been swarmed with requests and they now have over 500.

The help now means that there will be more than one doll to giveaway in each weekly drawing.

One donation that they have received is from a real estate company that donated $5000 and also challenged other companies to join in with doing so.

The dolls can be ordered straight from the website, where they can be customized and a voice recorder can even be added.

For the customs dolls, it is estimated to take between 1-3 weeks to make, plus delivery time.

There is no need to worry about doing it wrong as Daddy Dolls will remove the background of the image for you.

And if your worried about selecting the best picture, they offer some tips on the website which include:

For the lighting, they recommend that natural lighting is key to a non-grainy picture.

Also to make sure all of their body is in the picture, make sure there aren't any feet, hands or heads chopped off.

The company has received testimonials from buyers, singing its praises.

One buyer wrote, "I just wanted to thank you so much for coming up with this product. My husband and I purchased one when we found out we were expecting. Our daughter has had a close bond with him from the first time he talked to her in the womb. She was born Nov 7th.  Daddy is in Afghanistan, but this daddy doll has truly been one of the greatest blessings."

"He got to Skype and she heard his voice. So when we introduced her daddy doll she was instantly soothed by his voice. The nurses at the hospitals always ask to take it if they take her to the nursery."

"They say all it takes is putting it next to her in the bassinet and playing his message and she instantly calms and just stares at him. She fell asleep staring at the daddy doll. Again thank you so much for this idea or having the courage to run with the idea."

Whilst another said, "We received our Daddy doll today and I must tell you, the reaction from my 4-year-old daughter was priceless."

"Thank you so much for making such a great item for kids who really don’t understand a parent being gone!"

An ideal gift for anyone who has family members who live a long-distance away.

For children, having mom or dad with them can bring huge comfort.

Even if it is in the form of a soft toy.