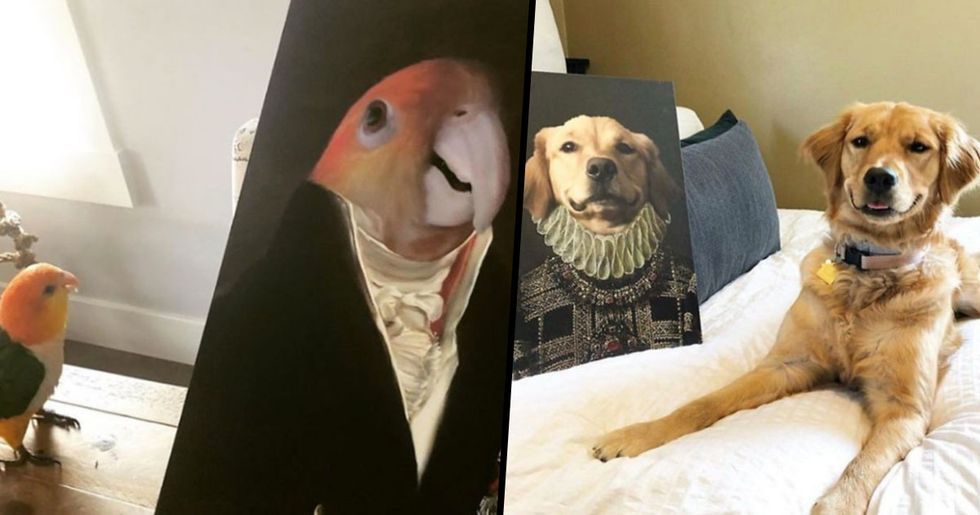 This Company Turns Pets Into Royal Portraits and They're Amazing

We all love our pets, don't we? Some way more than others, but we love them nonetheless.

However, as weird as it may sound, the results are amazing! I've compiled a list of my favorite pet portraits for your amusement. Happy scrolling!

This little cutie looks like he was born to be royalty!

Thankfully, he doesn't need glasses, because that would be a difficult task.

I don't know what looks better, the dog or the painting.

Can someone please let me know where I can adopt this cutie?!

"Wow, I really am handsome!"

I love how this cheeky chappy knows how good he looks in his portrait.

Who does this remind me of? Oh yeah, the cat version of Stinky Pete from Toy Story... Wow.

I wonder if this little feline is laughing after seeing its royal portrait?

It's an honor, Your Highness.

He's really not impressed, is he?

Double the trouble, double the portraits.

This portrait completely captures the emotion on this little kitty's face.

This dog's perky, little ears totally make him such a unique pet. How adorable!

I don't think I've ever seen a cat like this one in my life. Piercing, orange eyes as well as an extremely furry face? What a combo!

That expression is adorable!

I mean, forgive me if I'm wrong, but is this portrait modelled after the noble Jon Snow?

"I've seen this handsome fella before..."

Now, this one makes sense. Corgis are known to be royal dogs. The Queen of England said so.

This little fella deserves a royal portrait. It was just meant to be!

If cats could have resting b*tch faces, this is what it'd look like.

I wonder how all the pets managed to make the expression that their painting holds? Very talented indeed.

I guess he was impressed with the outcome of his portrait.

A parrot in a tux? Iconic.

This lucky pup got two portraits done. One in a tux and one in his general's uniform. Just in case you wanted to appreciate both versions.

Maybe he didn't quite realize just how handsome he was until he saw this shot.

There's a special place in my heart for those people that decide to adopt special-needs cats. Simply adorable!

This mighty-proud feline looks like art, even without the painting next to it. Wow. And if you want a special portrait of your pet, then they can be purchased from the official Crown and Paw website! Happy shopping!