Nadeau is not only the first woman to pump during a D.C. council meeting, she’s also the first council member to give birth while in office. | 22 Words 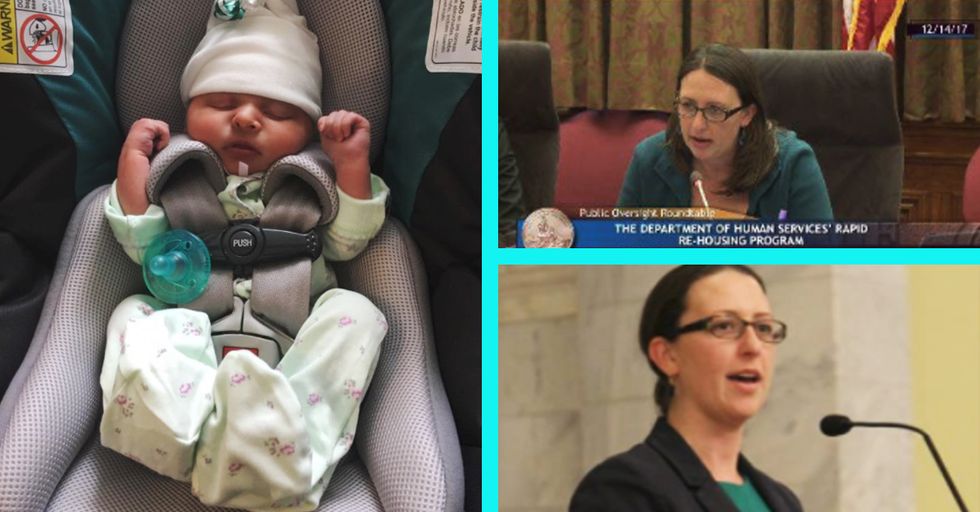 Being a new mom with a job can be a challenge. Even if working moms have childcare while they work, they aren’t completely off the hook. Mothers of breastfeeding babies need to pump their breast milk every two to four hours, regardless of where they are or what they are doing, which can take up to 30 minutes.

For moms with jobs, this usually means taking long breaks during the workday and potentially missing out on work. But this month, D.C. Councilmember Brianne K. Nadeau found a good solution for this dilemma, and may have made history in the process.

Brianne K. Nadeau is a city councilmember in Washington, DC.

As part of her job, she regularly attends public hearings. These hearings can get pretty lengthy with some lasting even up to six hours.

As a new mom, Nadeau has to pump breast milk in order to feed her new baby.

Nadeau’s daughter Zoe is 3 months old. And like all babies, she’s gotta eat. That means Nadeau needs to pump breast milk while she is at work.

Pumping breast milk can take up to 30 minutes, and Nadeau didn’t want to have to call a recess every few hours to go and pump.

Pumping breastmilk can be an involved process. Moms have to take a lot of time to hook up to a machine, get partially undressed, and wait for their milk to be pumped.

To avoid all of that hassle, Nadeau decided just to pump right at the dais!

Instead of calling a recess, Nadeau decided she could handle pumping during the meeting without being distracted. She tweeted her plans so everyone would be prepared.

But really, there wasn’t much to be distracted by.

Nadeau used a pump called a Freebie which can be placed underneath a woman’s clothes and allows them to pump without removing anything. It collects the milk in cups instead of bottles, which a mom can slip it out to pour into bottles. Nadeau said the pump barely even makes any noise.

Nadeau is not only the first woman to pump during a D.C. council meeting, she’s also the first council member to give birth while in office.

She told the website Babble, “I wanted to share my story so that other working moms would know they are not alone. We’re all just doing our best to juggle being moms with being our best at work. It’s not easy!"

Of course, some people aren’t happy about her decision.

People tweeted that she was just doing it for attention. And to that we say, "awesome!" Of course, it was not just a publicity stunt (she needed to feed her baby!), but it was a great way to show that breastfeeding and pumping milk is natural and it doesn’t hold a woman back from doing her job.

But other people were supportive and glad she was helping to de-stigmatize breastfeeding and pumping in public.

@BrianneKNadeau Thank you for your leadership and no-nonsense approach. As a fellow mom, I am thrilled.
— Molly Rauch (@Molly Rauch)1513346903.0

Women were inspired to see another woman in a high-powered position use her position to help promote the normalization of the act. Boobs were made for feeding babies, after all!

Her colleagues on the City Council were supportive of her choice.

Charles Allen, a fellow councilmember told the Washington Post, “Council member Nadeau has business to do. She can run a hearing and if she needs to pump, she can do it." (Allen is also committed to family rights, and co-introduced a bill this year that supported paid family leave.)

Congrats to Nadeau on being a pioneer!

It’s pretty cool that Nadeau refuses to let anyone stop her from being a mom and holding a high powered position. And she is using her platform to help other women see that they can do the same. Dare we say it..? We’re pretty pumped for her! (Sorry.)