They Thought They Got Away With Scamming Amazon Out of $1.2 Million...Until the Postal Service Got Involved | 22 Words 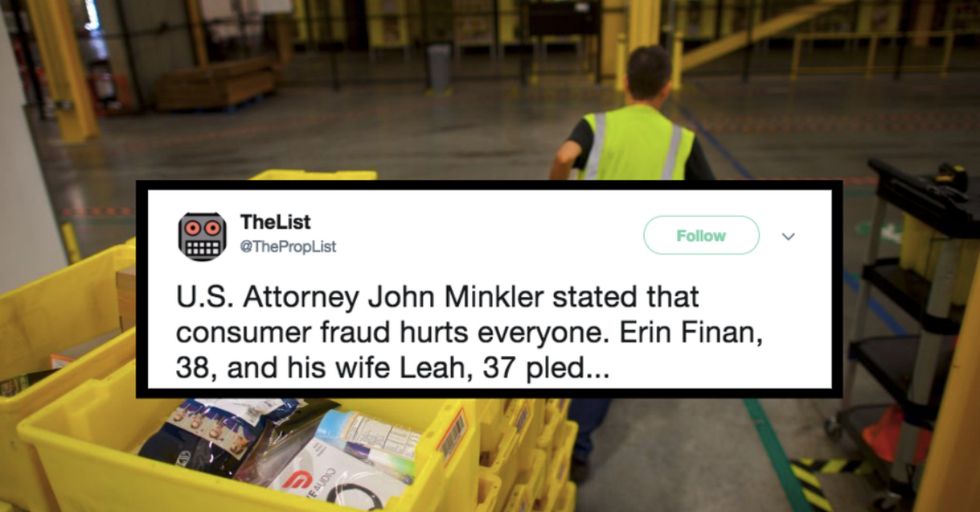 They Thought They Got Away With Scamming Amazon Out of $1.2 Million...Until the Postal Service Got Involved

Amazon.com has become a fairly huge part of our daily lives. With the ease of ordering and speedy delivery that comes with Amazon Prime, many people have abandoned going to the store altogether and do 100 percent of their shopping online.

A couple in Indiana took their Amazon obsession to a whole new level and managed to con the online retailer out of a LOT of money. Keep reading to hear how they almost got away with it. And no, we don't suggest you try this at home.

It turns out that Amazon has an extremely generous return policy.

A quick call to customer service will most times get you a refund on your order or, at the very least, a replacement on a damaged item. Because of its massive size, it's most likely easier for Amazon to dole out refunds than take the time to investigate each and every claim.

A couple Muncie, Indiana decided to use this loose refund policy to their advantage.

According to a recent press release from the Department of Justice, Eric Finan and Leah Finan stole 1.2 million dollars worth of electronics before Amazon caught on. That must have been a TON of Amazon packages.

According to the release, the couple would start the con by ordering electronics.

They would then claim that their orders would arrive damaged and remand a refund. In order to keep their cons hidden, they created hundreds of fake Amazon accounts.

They ended up scoring over a million dollars worth of goods.

This included a variety of Xbox game consoles, GoPro cameras, Samsung smartwatches, and Microsoft Surface tablets. It turns out, however, that the couple didn't act alone.

A man named Danijel Glumac, who acted as the couple's broker, was also involved.

After getting a refund for the items, the Finans sold them to Glumac for less than market value. Glumac then proceeded to sell the items to an unnamed New York establishment for a marked-up price.

The Finans also received a cut of the money Glumac made.

But in another surprising development, it turns out that the Finans may have gotten a raw deal. While they stole some $1.2 million worth of electronics, Glumac ended up giving them just $725,000 in return.

In the end, the tricky trio was caught, but not by Amazon.

It was the IRS, the Indiana State Police and the U.S. Postal Service that finally realized something fishy was going on. With all those packages being delivered, it's no surprise that the mail carriers suspected something.

According to USA Today, the Finans will be ordered to pay $1,218,504 in restitution to Amazon after the plea agreement. They also potentially face 20 years in prison for the scam.

The plea deal the Finans accepted also calls for them to waive their right to appeal if they end up being sentenced to less than seven years and three months in jail.

Judge Tanya Walton Pratt set sentencing hearings for November 9. This case is similar to a previous Amazon-related scam that also involved electronics, but instead used hackers to trick customer service.

According to an article on Motherboard.com, the scammers would create message boards detailing the scams.

"On hacking forums, scammers are offering to obtain refunds or replacements for high-value electronic items bought on Amazon by tricking the company's customer support staff," said Motherboard. "This means that somebody buying an Xbox, for example, could order their product and then get their money back or an additional console, whilst keeping the original."

"All it takes is some information about the Amazon account and a bit of sweet-talking. In exchange, these scammers or middlemen ask for a cut of the earnings."

With the ease that these con artists were able to carry out their scams, we're guessing Amazon might make a change to their refund policies at some point in the future. Although we're guessing the company hasn't taken that big of a hit, considering it recently hit a market value of $500 billion.

So, if you're thinking about scamming a retail giant like Amazon, we suggest you reconsider.

While the deceptively relaxed refund policies might make it seem like it's an easy con, you'll get caught eventually. And paying back that 1.2 million dollars seems like a less-than-easy feat, especially on top of all those costly legal fees.