This Couple Isn't Having Twins, So Why Are There Two Faces In Their Sonogram? | 22 Words 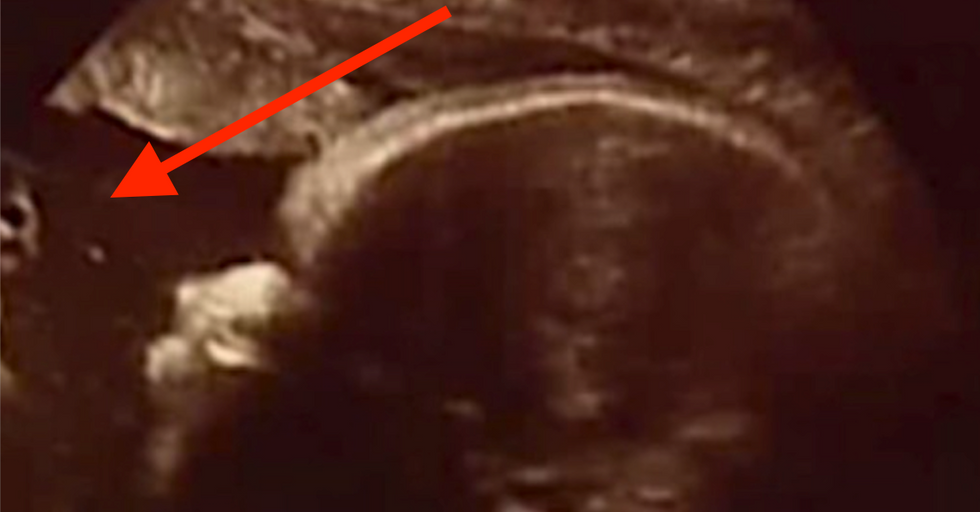 This Couple Isn't Having Twins, So Why Are There Two Faces In Their Sonogram?

When you go to get an ultrasound, you expect to see your baby. Obviously. What you don't expect is to see another face hanging out in the womb. But that's exactly what happened to Alicia and Zac from Pennsylvania.

Every couple looks forward to their baby's first ultrasound.

The first time you see your baby on the screen, it's a totally magical experience. Sure, it might look more like a static-y TV than an actual live human being, but parents' love knows no bounds. In a typical ultrasound, the tech will make sure everything is cookin' along just fine, and might even try to determine whether the baby is a boy or girl. That's to be expected. What you might not expect is to see someone other than your baby in the pictures the doctor prints out.

The couple from Pennsylvania was going for a routine checkup on their baby girl. They were both feeling a bit nervous, as Alicia had experienced complications with the births of her first two children. Her oldest daughter was born with pre-axial polydactyly, meaning she had two thumbs on her right hand. Her second child was born with a cleft lip and palate. However, the ultrasound for their newest baby girl showed that the baby was just fine. But that's not all it showed...

After the tech printed out the sonograms, the couple couldn't help but notice something strange about the images.

Can you see it? Make sure you're looking very closely.

It's over there on the left.

How about now? Look in the center of the circle and you can't miss it.

Zac and Alicia immediately noticed that there was a face in the sonogram — and it wasn't the face of their baby. Alicia is convinced that the face belongs to none other than Jesus. As in, Jesus Christ. "When they gave it to us... Umm, to me, it's Jesus. And it looks like Jesus," she told Fox43. Zac says that the image made him emotional. "it almost brought tears to my eyes," he says. "I was speechless, I just couldn't believe it, I really didn't believe what I was seeing." But not everyone who saw the image agreed...

It is pretty surprising.

What is Jesus doing in there?! You would think He'd have a pretty full schedule these days, although it is super nice that he dropped in on the couple to allay their fears. Baby Briella was born earlier this week without any complications. We love a story with a happy ending! So, what do people have to say about this holy phenomenon?

Obviously, there were some Twitter users who were not convinced the face in the sonogram was actually that of Jesus.

After all, that face really could belong to...well, just about anybody. This Twitter user insists it's Charles Manson. Well that puts a slightly darker twist on things.

Yet another user couldn't decide if the face looked more like Elvis or Lowell George.

I guess that's the kind of confusion you get when you're looking at a blurry, black and white ultrasound image. Usually, people try to guess which parent the baby resembles more. Not the identity of the mysterious face that also appears in the image.

Or could it possibly be Jeff Tweedy?

You know that if Jeff Tweedy is watching over your baby, that child is going to have great taste in music. What a lucky baby.

Apparently, this isn't the first time the son of God has made an ultrasound appearance.

Back in April, an Indiana woman claimed to see Jesus on the cross in her own ultrasound image. But Jesus' appearances aren't limited to ultrasounds...

Here He is on the side of a cliff.

Apparently, this image appeared in Colombia after a landslide occurred. You can't deny that it definitely looks like a face!

And here He is in a wrinkled sock.

Obviously you can't go looking for deep, meaningful signs every time Jesus appears in a sock, but this definitely means something, right? Like maybe you should never iron any of your clothes ever again.

Jesus has also made an appearance in a piece of naan bread.

Is this a new kind of communion we weren't aware of? Because we're totally into it. Has the face of Jesus ever appeared in your food? We definitely wanna hear about it.