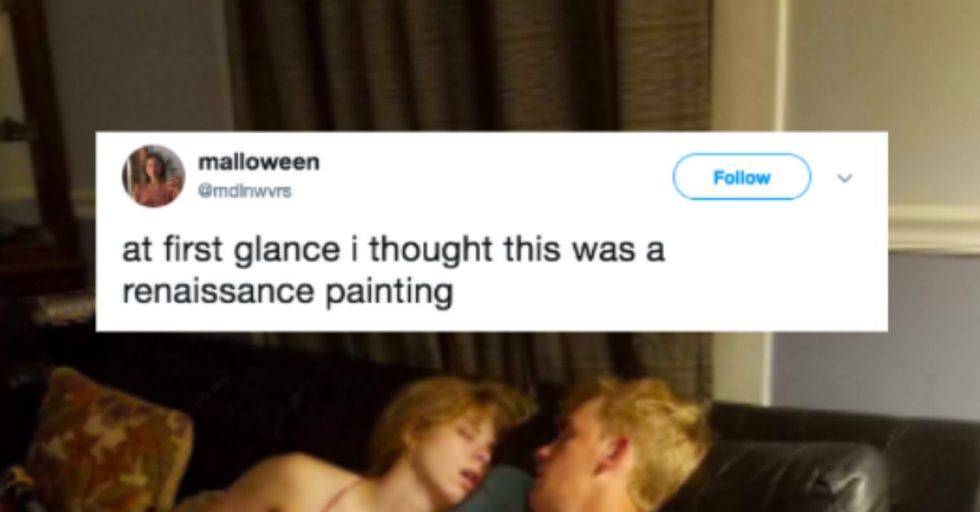 If there's one thing we know about great art, it's that sometimes it strikes in the most unexpected places.

Like on a couch on which two super drunk people have fallen asleep.

A photo of a half-naked couple sleeping on a couch is going viral because it looks scarily like a painting from the Renaissance era. It's actually incredible, and you have to see it to believe it.

Twitter user @MeatyOakHair tweeted this photo with the caption, "One night stef and I got shit faced and passed out on the couch."

Innocent enough, right? Two inebriated lovebirds try to make it to bed but can't quite get there. It's happened to the best of us.

What hasn't happened to all of us is perfect lighting and positioning.

It went insanely viral and inspired others to filter it so it resembles a painting even more.

This version was made using the Prisma photo editing app, but we have to say, the original is more Renaissance-painting-like than this actually painted version of the photo.

Another filter gives it a more angelic look:

Raise your hand if you kind of want a framed print of this hanging in your foyer. There's something just so innocent and romantic... and drunk about it.
20%