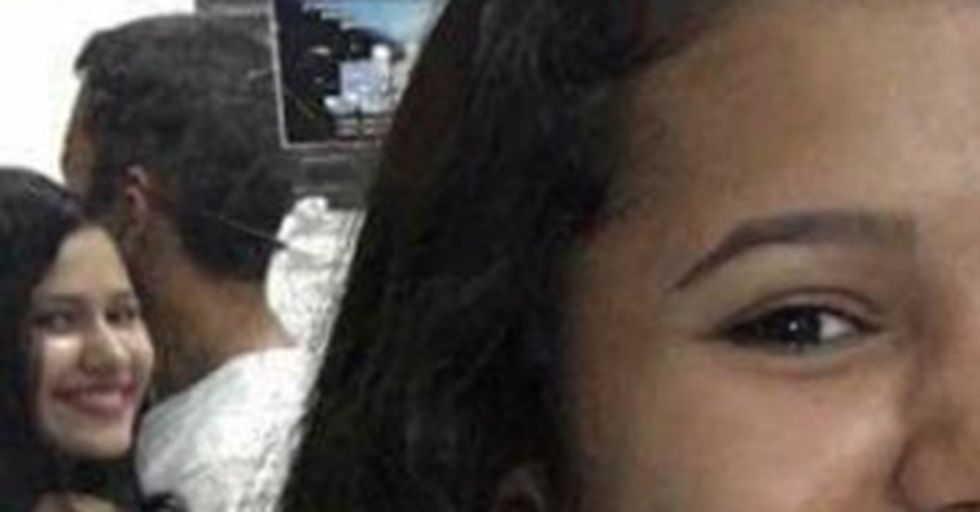 Earlier this week, a Twitter user named Andy posted a pic of himself with his girlfriend.

Nothing weird about that, right? Well, it doesn't take long to figure out why this pic was a little different than other loving photos you'll see online.

That's...not how reflections work, is it?

Being a Gemini is one thing...

...ignoring the laws of light and reflection like a daywalking vampire is something else entirely.

Chances are, she's not a mind-bending demon sent from the netherworld...

But Andy's remained pretty silent on the matter since declaring her a Gemini.

As if "being a Gemini" gives someone two faces like a villain from the Harry Potter-verse.

You can try looking for clues that it's been Photoshopped, but the print on her dress doesn't reveal any glaring disruptions that suggest it's been manipulated.

What about a twin sister? Could that explain it?

If you've spent several minutes trying to figure out if the face in the mirror is the same as the one in the forefront...you're not alone.

If this is creeping you out, how much would you need to lift her hair up and risk a VERY disturbing reveal?

Some very naive people explained to Andy what was going on, even though the irregularity is pretty glaring.

FINALLY, someone explains the Gemini reference. Unfortunately, that STILL doesn't explain the girl with two faces.

I mean, if you were going to doctor it, wouldn't you give her the opposite expression? Maybe Andy's better with Photoshop than he is with metaphors.