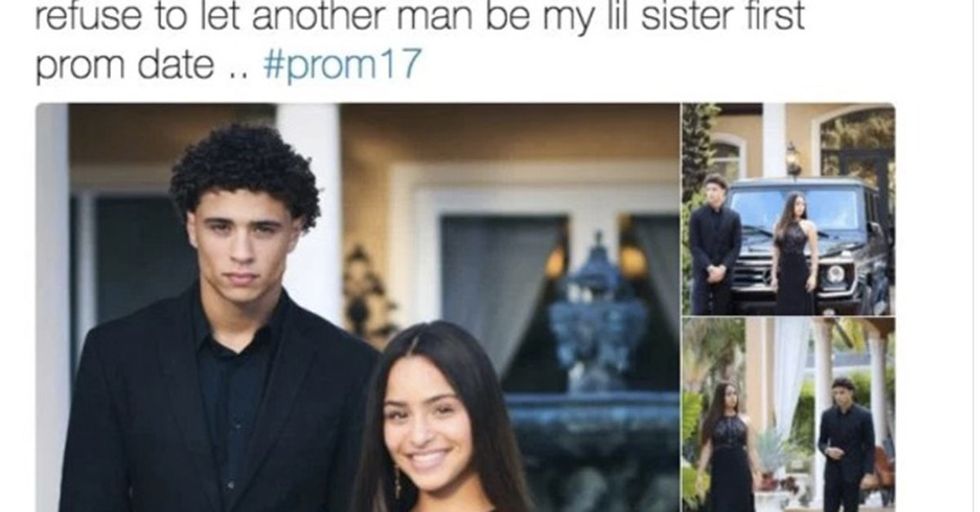 This is the sort of story that really doesn't need much of a set-up. This guy's first tweet says it all.

He "refused" to let another man take his sister to prom. So he took her. No matter what the explanation for this weird refusal, it's pretty creepy and possessive to control your sister's social life like that. Not your daughter, not your wife, not your girlfriend...your sister. I'm sure there are all sorts of interesting (and maybe troubling) reasons for why he did this, but for now, let's just bask in the Internet's reaction to this off-putting tweet. They, uh, weren't on board with his idea.

It didn't take long for Twitter to raise a collective eyebrow at this guy's plan and whatever his intentions were.

Even if you're a father figure to her...lighten up, man.

Another BIG problem: He never smiles in the pics.

It's hard to tell if he's attracted to her, or looking at her like a prison guard looks at an inmate.

This is a crass way of putting it, but this certainly won't help her social skills later in life.

It takes a village...

The incest thing was, at the very least, in the back of everyone's minds. I mean, how could it not be?

You have to wonder, what was his expectation of the night. That she would have a better time with him hovering over than with some of her friends?

Sometimes, words fail, and you have to rely on reaction memes to get the job done.

This one will makes sense to Game of Thrones fans.

Did we read the original tweet correctly? *goes back* Yup. Weird.

That makes two of us. I hope that brother and sister are very happy wherever they are. Well, actually, I don't care about the brother, so just the sister.