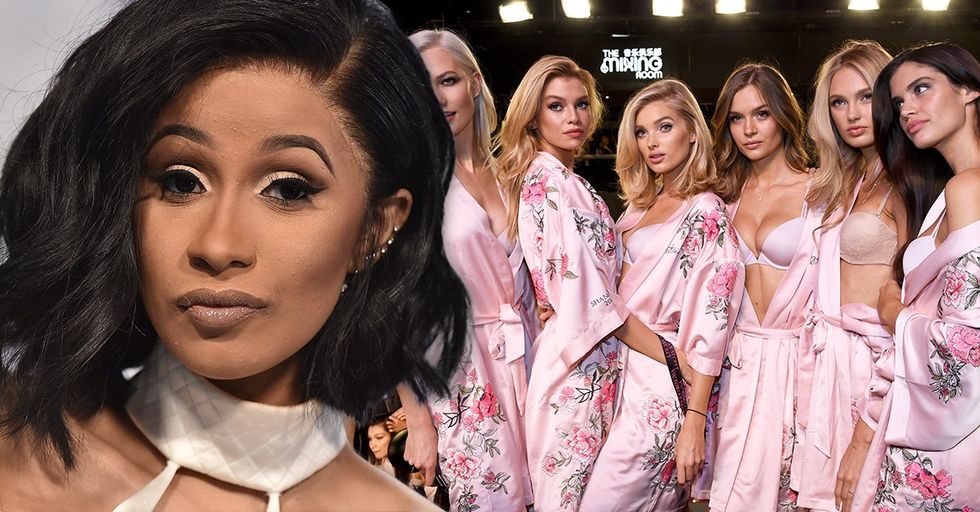 On Tuesday, the annual Victoria's Secret fashion aired on CBS. The show, which was taped in Shanghai last week, was by all accounts, an extravaganza of international proportions. The models looked fabulous, as models often will. The runway was superbly lengthy. Even better, barring one notorious incident, almost all the models made it down the runway and back, lingerie and wings still in good form.

Unfortunately, the show has also had no end of controversy, much of it having to do with a dreaded word called racism.

This year's Victoria's Secret fashion show was meant to be an extravaganza of sartorial excellence.

Filmed in Shanghai, China, the show was meant to star the likes of Gigi Hadid, Adriana Lima, Alessandra Ambrosio, Candice Swanepoel, Lily Aldridge... You know, all the big names you think about when you think about giraffe-like women with unrealistically fit bodies stomping down an artificial sidewalk.

It was also going to be Alessandra Ambrosio's big sendoff.

The 36-year-old Brazilian model, who has walked the Victoria's Secret runway for the past 17 years was ready to give up her wings so she could spend more time with her family. This was going to be her big moment, her grand finale. But then...

One by one, things started falling apart with the show.

Gigi Hadid won't be at the Victoria Secret fashion show this year, maybe because of the Snapchat video posted in Fe… https://t.co/yAGFtNwb2a
— BBC Three (@BBC Three)1510934403.0

Gigi Hadid, the reigning fashion It Girl had to drop out because her visa wasn't approved by the Chinese authorities. The reason? Racism. Video had surfaced of Hadid earlier in the year making a racist gesture with her eyes that had Chinese social media users fuming.

Other models were also unable to make the show because they were denied visas.

Big names such as Julia Belyakova, Kate Grigorieva, and Irina Sharipova were denied for issues ranging from racist incidents to “diplomatic issues." Even the show's big talent wasn't spared.

Singer Katy Perry was replaced with Harry Styles after the Chinese denied her visa because of a performance she'd done in neighboring Taiwan, which China insists is actually part of their country.

To make matters worse, one of the models, Chinese-born Ming Xi slipped and fell on the runway and CBS not only didn't cut out the clip, they also showed footage of her crying afterwards, igniting a firestorm of social media criticism. The point is, the Victoria's Secret fashion show was a big, hot mess. None of it, however, compared to what happened next.

On Wednesday, model Karlie Kloss uploaded a video to Youtube offering viewers a behind-the-scenes look at the models before they hit the runway.

The video showed the models rapping the lyrics to song of the year Bodak Yellow by rapper Cardi B. This was all good and well except eagle-eyed viewers quickly noticed that the footage had been edited to omit a certain part of the lyrics.

When an unedited version of the video made its way to social media, people were finally able to hear what the models were saying.

As it turns out, the Victoria's Secret models, at a show that had already been plagued by accusations of racism no less, were rapping explicit and racially problematic lyrics at the very top of their lungs. "I don’t wanna choose / And I’m quick cut a nigga off / So don’t get comfortable," was the exact lyric in question.

As a quick reminder, it is not appropriate for people who are not of African American or black extraction to say the N-word. Author, journalist and activist Ta-Nehisi Coates explained why during a talk for his newest book, We Were Eight Years In Power.

As we previously stated in an article on the subject:

The reason white people can’t use the N-word... is because of the context. [Coates] cited, as an example, his wife’s use of the word “honey" in reference to him. It was okay if she said it because she was his wife, but if a strange woman said it – not okay. In fact, it might even cause problems because why would a strange woman want to call him honey?

As you can imagine, people on social media were definitely not having it.

to the causcasian Victoria’s secret models, please refer to this clip the next time you come across the n word during your rap-a-longs??? pic.twitter.com/ssySggBQZV

So these privileged female models are allowed to say the n word? i THINK THE FUCK NOT & don’t come @ me w/ the bs excuse “they were just singing the song," BECAUSE ITS NOT OKAY

there’s a really funny video of VS models singing Bodak Yellow and when the N word popped up all of em sang it but this girl looked straight at the camera like “NAH" pic.twitter.com/82NmHLHmVx

wait did those mayonnaise’s just say the n word pic.twitter.com/z48WuM6L9B

Hearing these "niggas" but not seeing no niggas pic.twitter.com/xYPAMb0djE

It's one thing to rap along to Cardi B, it's another thing to rap a word that has been the cause of so much pain and struggle for people of color. It was literally not the models' place to say the N-word. For all those who have a problem with this assessment, Coates gave an example of why this is problematic by citing a friend of his, "who used to have a cabin upstate he termed the 'white trash cabin.' 'I would never refer to that cabin' like that, Coates said. 'I would never tell him, ‘I’m coming to your white trash cabin.’" Why did he refuse to use the phrase "white trash cabin?" Because it was not his place, just like it's not the place of the Victoria's Secret models to belt out a racially problematic word at the top of their goddamn lungs.