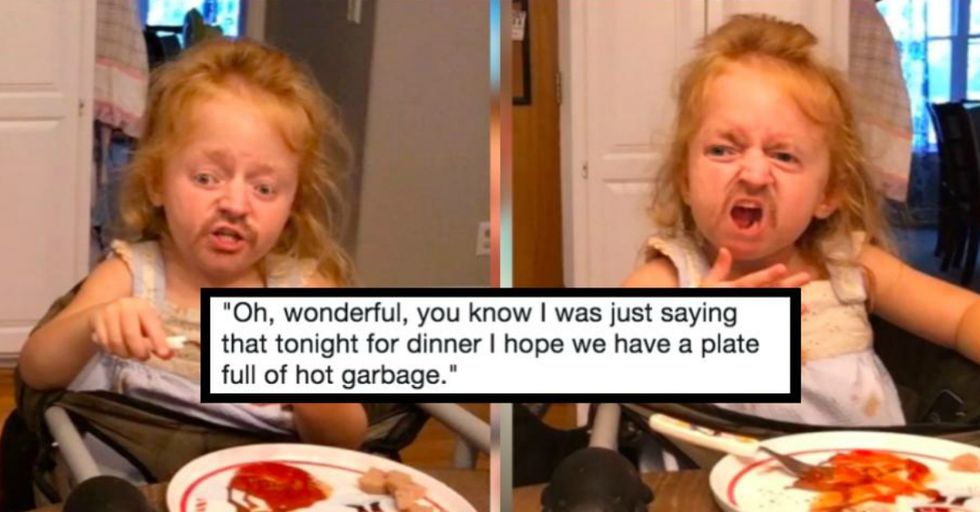 When Face Swap came on the scene via an app for your phone and Snapchat, it immediately became addicting. It seemed like everyone was swapping their faces with their best friends, their pets, or art pieces at a museum. Nobody and nothing is safe from a classic Face Swap.

But it's hard to find a funnier Face Swap than this father-daughter duo that truly treads the line of both hilarious and terrifying. Seriously, we can't look away.

Woodsie has quite the following, with over 38 thousand followers on Instagram, and over 40 thousand subscribers on Youtube. He's known for hilarious posts involving his daughters, and his most recent video titled "QUEEN BABY: Food Critic" is the best of the best. He recently signed deal to create an original weekly series called Dad AF, which will appear on Bad Parenting Moments.

Never one to shy away from posting ridiculous pictures and videos on social media, the video involves him face swapping with his daughter as she critiques his food.

The only video description is a simple, "She's like a tiny drunk Gordan Ramsay." And honestly? He's not wrong.

The video stars both of his daughters completing skewering their dad's cooking skills.

And while obviously it's not real, it's very funny. And SUPER relatable for most parents.

Besides posting hilarious Face Swap videos, Woodsie also posts the funny and wild adventure of being a dad to two girls.

Two sassy girls, we might add. Like how in this Instagram picture he posted in January, his daughter is standing on her diapers clearly up to no good.

Or this adorable video of his daughters clapping and singing in the backseat.

The video has over 60 thousand views and was a sure hit on Woodsie's Instagram page. Also, when are these two kids going to put out an album already? But that's not all of it...

This hilarious video of his daughter trying to put sunglasses on him is both anxiety-inducing and wonderful.

"As someone who has a crippling fear of having my eyes poked out, I was totally fine with this and 100% did not piss my pants at any point during the filming of this video," he wrote in the Instagram caption. But when your kid is that cute, it's kind of hard to deny them anything (even if it terrifies you).

Clearly, this is a dad who has embraced Snapchat and everything it has to offer.

Which is probably why this Instagram video has been viewed thousands of times. It's insane and we truly can't stop watching it.

It's pretty obvious where his daughters get their sense of humor.

They're a little family of comedians. This is how we want to eat every single one of our meals, please.

Sometimes Woodsie takes a break from posting his girls, and he'll post a mirror selfie like anyone else.

But with a caption that will make you crack a smile. "Emmy night! (broadcast news emmys) (mid-america region) (pretty much invisible)," he writes about himself dressed up. We. Feel. You.

At the end of the day, if you want some laughs and posts that will totally make you smile, Woodsie is your guy.

Everything he puts online is relatable, funny, and ridiculous. Which is probably what the world needs a little more of anyway.