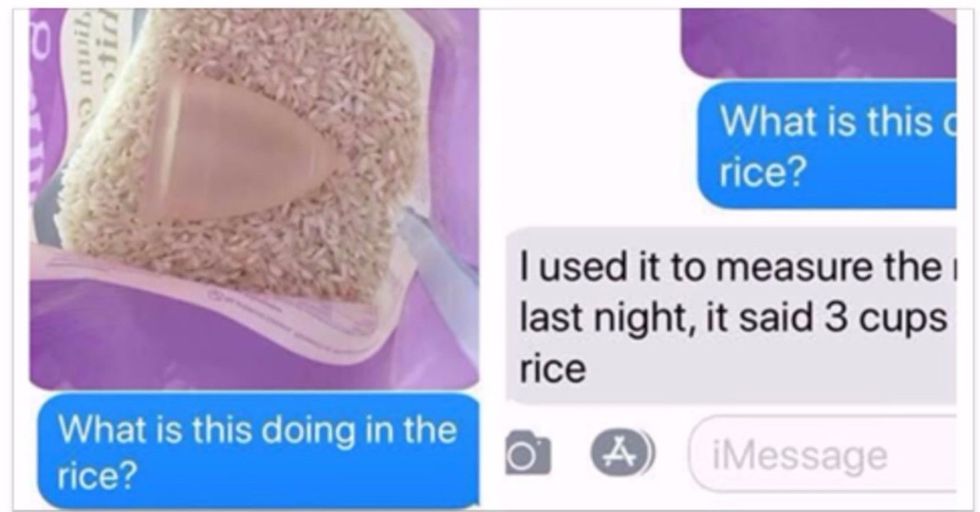 When you make a mistake in the privacy of your own home you are probably relieved that it was done in private. But when your wife shares your text exchange about your mistake and it goes viral, you will likely spend the rest of your life not living it down. Such is the case for one man who mistook a little cup he found for a rice scooper.

Some people have a flair for messing up just about anything in the kitchen.

It doesn't matter how basic and simple the recipe is, if they attempt to cook it something goes wrong. Anyone who lives with one of these food destroyers understands that there is little hope. But sometimes dinner is left in their hands anyway.

Men get a bad rap for being clueless in the kitchen.

The stereotype of the hapless dad isn't entirely unfounded, even if it's unfair and certainly doesn't encompass all men or all dads. The women married to kitchen disasters know to make things as easy as possible for them. We leave out the ingredients and necessary kitchen utensils. We leave detailed instructions. We hope for the best.

It started out innocently enough.

Mom Cindy Hobbs found the handy scooper in the rice, and asked her husband about it.

"What is this doing in the rice?" she asked. "I used it to measure the rice last night. It said 3 cups of rice," explained her husband who still had no idea what he had done.

His wife was not impressed.

"It's my MENSTRUAL CUP YOU DICK POD!" "? Menstalony soup?" her husband responds to the delight and confusion of the world at large. "It's MINISTRONE [sic] soup you wanker! Google menstural! [sic]" And then apparently he did, because the exchange ends with him saying, "Oh fuck!"

Her toddler had gotten ahold of her menstrual cup earlier. In the typical frenzy of mother/toddler interactions, Hobbs got the cup off the kid and put it down and then went about their lives. Turns out, she didn't get the opportunity to put it away, and she had put it down on the kitchen counter in the same vicinity as the rice that was thoughtfully left out for her husband to cook with.

Naturally, her husband confused the small cup with a kitchen utensil.

Hobbs assures us that the cup was clean, but there's still no question that everyone on Earth would prefer their rice measured with not a menstrual cup. Food minded people everywhere wonder how the recipe turned out considering how much smaller the menstrual cup is than an actual measuring cup. Did he measure the water with it too so that everything was in proportion, even if in very small portions?

We can't really blame the guy, kitchen stuff is confusing.

How different does a menstrual cup look from any number of other kitchen utensils? And when it's lying there on the counter next to the rice? What else was he supposed to think.

Menstrual cup rice is not likely going to take off, and neither will menstalony soup.

Let this be a lesson for anyone who lives with a hopeless chef. Clear the counter of all other things before laying out the ingredients and utensils you want your spouse to use. Also, let's just all agree that menstrual cups should never be placed on the kitchen counter. Ever.

Anyone with little kids knows that if kids find it, kids play with it.

Feminine hygiene products are a favorite toy. Kids have no idea what they are or what to do with them, but they like them. And it's always hilarious.