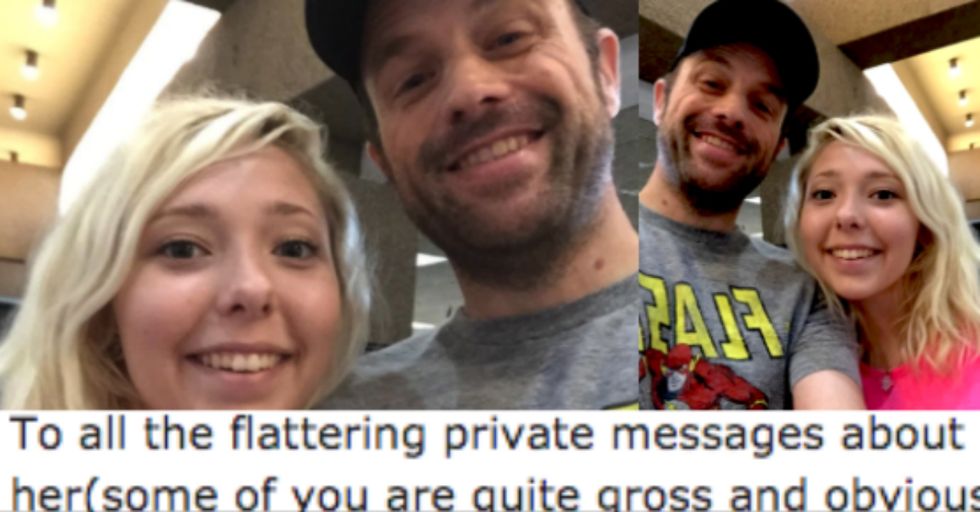 Being a parent is hard. It's so much work!

And being a single parent is somehow more than double the work. Seriously, how does that math work out? But that doesn't stop millions of single parents all over the world from sacrificing everything and doing their very best to provide for their children. Such is the case behind the father-and-daughter duo in today's story.

And when the Internet trolls came out to play, this shut them down perfectly.

One Reddit user recently shared a picture of him and his 19-year-old daughter with the Internet.

That's nothing too out of the ordinary. Plenty of parents share pictures of their kids online. But the story behind this particular dad and daughter is incredibly impressive.

In the photo's caption, the dad from the picture says that he's worked hard to ensure that his daughter can now go to college without taking out any additional loans.

She'll be entirely debt-free! The fact that she'll be able to graduate from college without the horror of student loans looming over her is awesome, and a huge testament to how hard her father has worked to start her life in the "real world" off on the right foot.

His daughter is headed to school in Texas.

Texas Tech's School of Nursing, to be specific. According to her dad, she was inspired to become a nurse by the fact that he has a chronic illness. And by her incredible desire to help others, of course.

"She's a good ole country gal that grew up on my cattle ranch and developed a fantastic work ethic," he said.

Unfortunately, several trolls decided to leave their disgusting and immature comments both on the picture and in private messages to the dad in it.

After all, it's a picture featuring a woman, therefore they must make disgusting sexual comments about her, right? What those trolls weren't expecting was dear old dad's reaction...

He later commented on the post directly addressing those who had chosen to make nasty comments about his daughter.

"To all the flattering private messages about how I'm going to be paying for the college team to do horrible things to her (some of you are quite gross and obviously virgins) I'm gonna break your brains here. She's a lesbian. So you'll have to rewrite your head cannon [sic] and resend that junk to me."

This is easily one of the best responses to Internet trolls we've ever seen. And we've seen a lot of 'em. It's a good thing his daughter is becoming a nurse 'cause those trolls are going to need someone to take care of those burns.

It's easy to imagine those denizens of Reddit staring shocked into their computer screens.

"Pretty woman immune to my trolling? Does not compute." Whatta bunch of pervs.

This other Redditor sums our feelings up perfectly:

This dad is the best dad. Hands down. We'd all be lucky to have a dad like him. And he seems pretty lucky to have such an awesome daughter, as well!

You're doing everything right. We also wish his daughter the best of luck as she starts college!