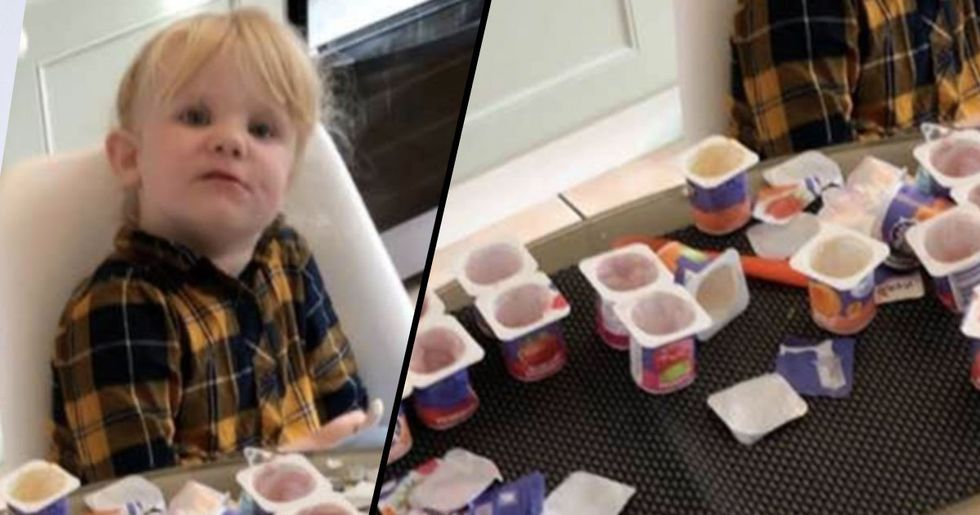 Dads often get a pretty bad reputation. Unlike moms, who are basically internet heroes, dads are often seen as a little bit... Less attentive. And one story from this week seems to suggest that's exactly the case - although what the kid managed to get away with behind her dad's back is pretty impressive.

A dad shared a viral picture of his toddler that every parent can relate to. Having turned his back for just a few moments, he came back and discovered his daughter had eaten an almost inhuman amount of yogurt. Scroll on for the hilarious image.

Being a dad is super rewarding.

The love and bond you feel with your offspring is incomparable to anything else out there.

But dads tend to have a pretty iffy reputation.

Unlike moms, who tend to be seen as super hardworking and selfless beings, dads in popular culture tend to... err on the side of deadbeat.

And when a dad is left in charge?

Well, that tends to be when things start to go awry - as this story proves!

When left to their own devices, young kids tend to get up to all manner of antics. If there's something bad to be done, best believe a kid will find it.

And one area where kids are primed for bad behavior?

That has to be around food. But one toddler absolutely excelled herself this week, in a hilarious story shared on Facebook.

This is Aaron Whysall.

He's a dad from Grimsby, a town in the north of England, and he had a very "dad" moment this week.

He was looking after his three-year-old daughter.

But, as she was safely strapped into her chair, he thought he could nip out for a look in the garden for ten minutes.

As soon as he came back indoors, Whysall realized he'd made a terrible mistake. "I was in the garden for 10 minutes. When I came inside to check on her, I saw that she had helped herself to 18 yogurts," he told Today Parents.

And people are absolutely loving the image.

The neatly-emptied containers of yogurt alongside the proud look on his daughter's face makes for a pretty comedic shot.

But parents noticed something else.

It could have been a lot worse - this kid is a remarkably neat eater! Want a cute way to ensure your baby is alright when they're out of sight? Scroll on for an innovative new babygro that has the whole internet talking!