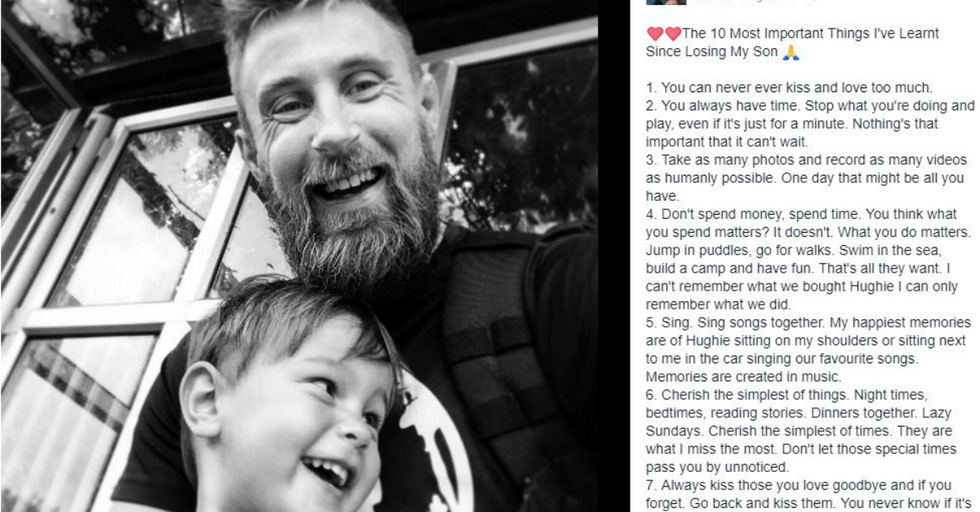 This Dad Lost His Three-Year-Old Son, and His Message Is Truly Inspiring

Losing a child is something that most of us could never even fathom. It's every parent's worst nightmare and is a loss that never truly goes away.

A year after a father from the UK lost his darling 3-year-old son, he decided to write down a few things the unimaginable loss had taught him. Keep scrolling to read his inspiring words.

But maybe grab some Kleenex first.

This is Richard Pringle, a dad from England, with his precious son, Hughie.

Hughie was diagnosed with a brain condition at a very young age.

Although concerning, the doctors said that the condition was manageable.

However, at just three years old, in the summer of 2016, Hughie suffered a brain hemorrhage. Tragically, he did not survive it.

A year later, still struggling to cope with his grief, Pringle was tucking his daughter into bed when suddenly inspiration struck.

He decided to write down a list of the 10 most important things he'd learned since losing his young son.

And the result is a total tearjerker.

The viral post has been liked 18K times and counting, and seems to have struck a chord with parents from across the globe.

"You can never ever kiss and love too much," Pringle said.

"You always have time. Stop what you're doing and play, even if it's just for a minute. Nothing's that important that it can't wait."

"They are what I miss the most. Don't let those special times pass you by unnoticed," added Pringle.

The post has hit home with both parents and kid-free folks alike.

It's so easy to get caught up in life's stressful moments, and I think we could all benefit from stepping back and appreciating the people we have in our lives. It's good advice no matter who you are, or what kind of life you lead.

We never know when they might be taken from us.

Pringle's poignant list makes it clear how much these parents cherish their children.

In this photo, Richard's wife, Jen, referred to Hughie as her "mini me."

Jen posted this adorable selfie with Hughie shortly after he passed.

Richard's words are truly ones to live by.

People from all walks of life commented words of support.

The huge outpour of love and support the Pringles' have received since the post has come in from all around the globe.

Richard shared this message from Japan, which was particularly moving.

Perhaps his most prescient message was: "If you have your children with you..."

"...to kiss goodnight. To have breakfast with. To walk to school. To take to university. To watch get married. You are blessed. Never ever forget that