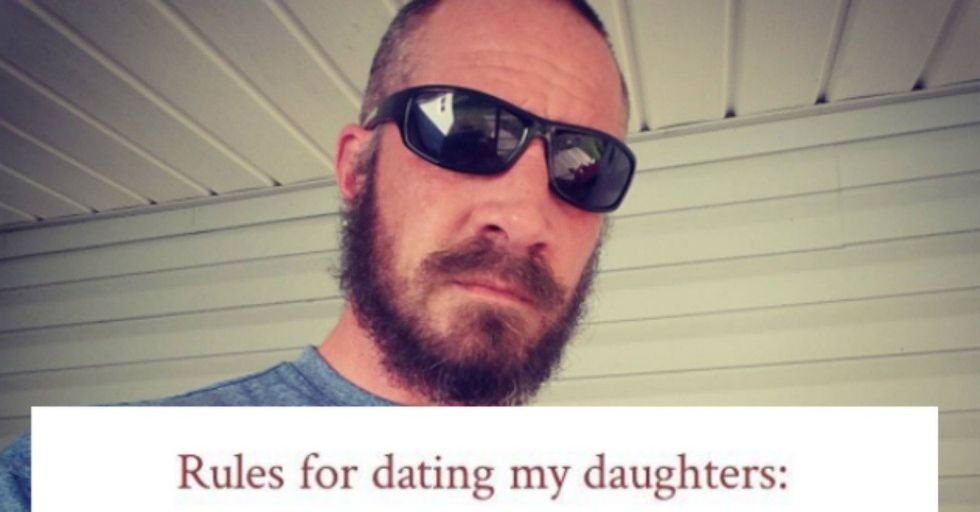 "What are your intentions with my daughter?" the big scary dad always asks the shaking teenage boy before prom.

Everyone knows the trope of the overprotective father spouting off a list of "rules" for any chump who tries to date his precious little girl.

Heck, they made an entire TV show off the concept.

One dad posted his particular list of rules for dating his daughters, and it's gaining a lot of attention, but not for the reasons you might expect.

J. Warren Welch is a writer and dad, raising five daughters with his wife, Natasha.

Five. Their blended family is big and overwhelmingly female.

As such, Welch is no stranger to jokes about what he's going to do when his daughters start dating.

Will he sit on the porch in a rocking chair, ominously chewing a toothpick? Will he burn a hole through the kid's hoodie with his icy stare?

The answer is no.

Welch is rightly creeped out by the old-fashioned cliché of a way-too-controlling father figure. The dude is woke.

And he's raising his girls to be strong women with convictions of their own.

That's why Welch decided to write his very own list of rules for dating his daughters. And that's why his list is going viral.

Welch is one father who won't assert overreaching power over his daughters. They are their own people, and his list of rules reflects that fact beautifully...

Without further ado, here is J. Warren Welch's list of "Rules for dating my daughters:"

"You'll have to ask them what their rules are. I'm not raising my little girls to be the kind of women who need their daddy to act like a creepy possessive badass in order for them to be treated with respect. You will respect them, and if you don't, I promise they won't need my help putting you back in your place. Good luck pumpkin."

Welch points out that no woman should need their "daddy" to be weirdly possessive in order for them to get respect. They deserve to be treated right because they are human beings, and they are strong. Also, calling potential suitors "pumpkin" was a brilliant touch.

In an interview with TODAY Parents, he said, "I understand the urge to protect your daughters. I get that. But the kind of posturing by fathers of daughters I was specifically responding to had nothing to do with that 'protective instinct' and everything to do with asserting their dominance over women and reinforcing a belief that women need men to take care of them." Seriously, someone give this man a microphone so he can shout this from the rooftops.

Welch got real about his experience with fatherhood.

"I'm going to be real honest here: I've never actually been nominated for a 'Father of the Year award...' That is exactly why I know that my daughters don't need my help making important decisions about their relationships. These girls are my heroes!" he told TODAY Parents.

"Father of the Year" award or not, Welch's message resonated with people everywhere.

Fatherhood is a complicated thing to begin with. Throw in centuries of harmful, constantly perpetuated gender norms, and it doesn't get any easier. But luckily, there are fathers like Welch who are willing to make a statement...

He told TODAY Parents that he hopes the "overwhelmingly positive" response he's gotten indicates "a change in attitudes towards women in our culture." Right there with you, dude.

Welch's advice to other fathers who have daughters?

To teach their kids that they don't need their father's approval on important decisions they make. "Doing so will only instill in them a belief that they need a man's stamp of approval before they can make a decision," Welch told TODAY Parents.

How many different ways can you say, "Yaaaasss!!"?

Because Welch deserves all of them. The message is clear: Women deserve to make their own decisions in life, and if you disagree, well then good luck pumpkin.