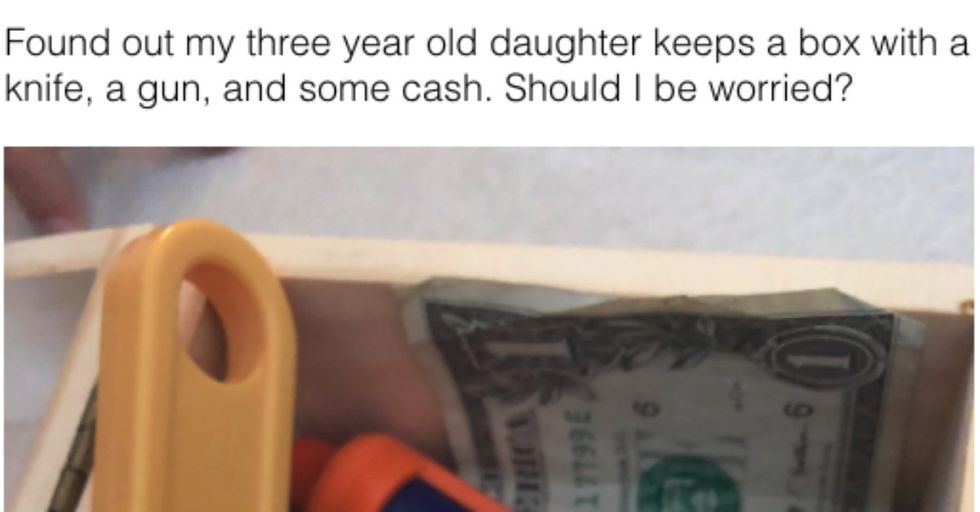 Reddit user moses1424 posted this photo, asking if he should be worried about his 3-year-old.

His toddler keeps a stash of money and weaponry. A toddler version of a stash anyway. So, is the kid into some dirty business? Is this cause for alarm?

Reddit users were quick to respond with wisdom and advice.

Good point, any evidence of toddler drugs? Does she always sit with her back to the wall, facing the point of entry? Does she keep odd hours? Has her behavior or personality suddenly changed?

Clearly the kid has been watching crime dramas.

This one took some time to figure out.

Turns out, there already is a preschool show featuring kids on the street. Which Sesame Street character would be most likely to have a stash like this? Probably Oscar. He lives in a garbage can, clearly he hasn't been making the best life choices.

One commenter noticed something hidden under the other toys.

Oh no! A spoon! Definitely drug-related. What has this toddler been up to when her parents thought she was napping? It turns out, she isn't the only little one with a stash like this...

It's good to be prepared.

Anyone who has walked the dark side of criminal toddlerhood knows that it could all come crashing down in an instant. One has to be ready to cut and run any time, and this kid is almost there. She just needs a passport. And a sippy cup.

This dad now knowsthat his child is not to be trifled with.

What if she finds out he went through her toys? What if she knows he's on to her? Put the box down and slowly back away, dad!

A similar photo was posted a few months ago by Reddit user USMC_0481. He was generally disbelieved and accused of staging the box. Skeptics think moses1424 staged his daughter's stash as well. We're not so sure though. The idea of the preschool set keeping stashes and "go boxes" is entertaining enough that we'll set aside our quest for truth and enjoy the threads for what they're worth.