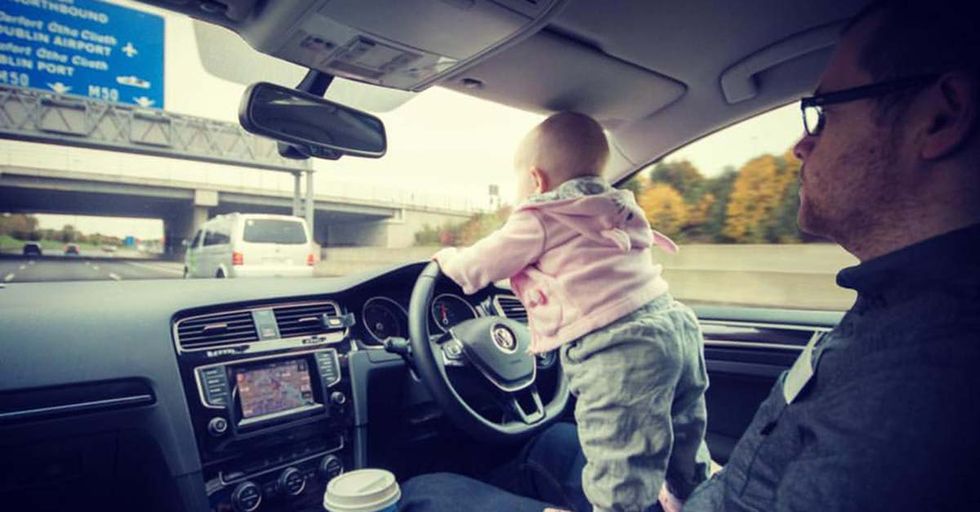 Just because Stephen Crowley is a dad doesn't mean the guy has lost his sense of humor.

This very creative Dublin designer has harnessed his Photoshop skills to make it appear that his baby girl, Hannah, is in some very tricky situations. Rest assured, she's fine and Stephen's a responsible dad, albeit one with a delightfully twisted sense of humor! You can see more of these pics and his more serious work on his Instagram.

Before we go any farther, here's a genuine, non-Photoshopped pic of Hannah and Stephen together.

Hannah's eighteen months old, but she's been through a lot already. She suffers from a rare immune disorder called HLH that kept her in the hospital for six months of her young life. She's doing better now thanks to treatment involving chemotherapy, medication, and a guardian angel (read about that below!) but she's not out of the woods yet.

Stephen, being a concerned parent, is constantly monitoring her health and safety (despite what these photos might lead you to believe).

They both received a big blessing when an anonymous donor gave Hannah bone marrow she needed to help fight her immune disorder.

Hannah's kept a wonderful spirit since the procedures.

Says Dad, "she's lots of fun, always smiling, and has a great sense of humor given what she's been through so far."

"Because we missed out on so much normal stuff of the first year, we take tons of photos now that we're able to do normal things out of isolation."

Since these amazing pics started circulating, Stephen's hoping to use his viral notoriety to do some good.

So he's urging anyone he reaches to consider donating what they can to Be the Match, a nonprofit that specializes in finding bone marrow donors for sick kids and adults.

As Hannah continues to fight the good fight, her dad's going to keep having some fun with Photoshop.

I'm sure she won't remember any of this when she's grown, so when she stumbles across these seemingly terrifying pics, I'm sure she'll have some questions for Dad!