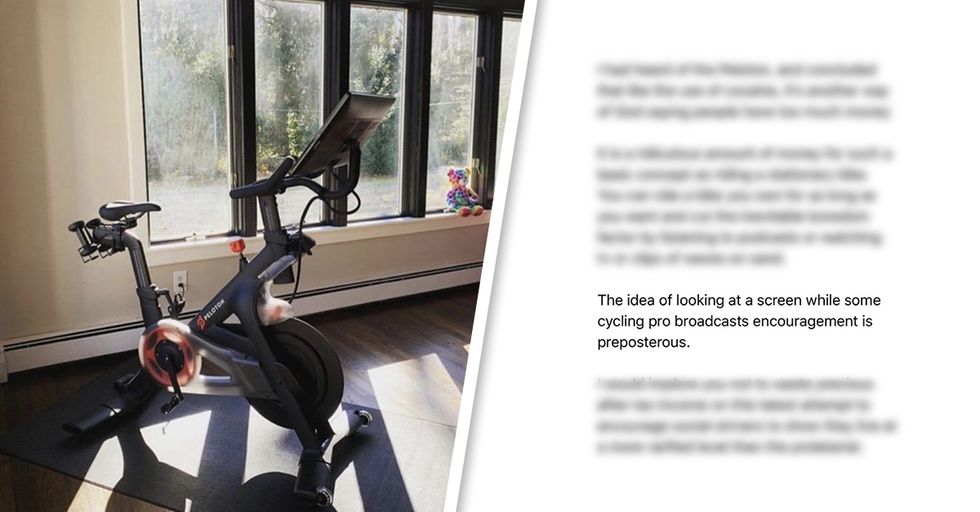 After Claire O'Connor finished her taxes, she had a hole burning in her pocket from all that sweet, sweet refunded government moolah. Looking for something nice to buy herself, Claire found the uber-fancy Peloton Bike... a potential purchase her father did not find necessary.

When Claire's dad caught wind of her idea to buy a Peloton Bike, he sent her an email that's making the entire internet reconsider the ways it spends its money.

Have you heard of the Peloton Bike? It's actually stunning that it exists in the first place: it is an admittedly well-designed but wildly expensive stationary bike with a built-in touch screen display.

And as a high-end luxury piece of exercise equipment...

... the Peloton is exactly the kind of exercise bike you would treat yourself to if you suddenly came into a financial windfall. No more shopping for exercise equipment on Craigslist for you, taxpayer!

So what made Claire's dad so upset about her potential purchase he had to sit down and write that stern (yet awesome) email?

Well, as it turns out, the Peloton might not be the best use of Claire's money. Or really, anyone's money. There are some, how should we say, hang-ups to the Peloton experience.

The Peloton is expensive. We're talking the 2,245 US dollars-kind of expensive. Just think of everything you could do with 2,245 dollars. Why, you could order a hot dog at a baseball game every single inning (honest to god why does a Dodger Dog cost six and a half dollars? Am I losing my mind over here?)

And then there's the Peloton Bike's display...

It's not an iPad you can load up with whatever content you want to watch while you sweat up a storm. Oh no. The Peloton Bike's touchscreen only displays workout videos... from the Peloton company. That's right, if you drop four months' rent on this bad boy, you can't watch Youtube or Crunchyroll or anything else while you cycle. Only Peloton. Peloton is love. Peloton is life.

Are those Peloton workout videos at least sick as hell?

Hell yeah they are. The Peloton classes are lead by some very confident instructors who push you through a workout that we can only assume includes a lot of Rhianna songs.

Speaking of Peloton videos, I watched the Peloton intro video, and oh man, it is really something.

We really wanted to realize the vision of having this convenient and engaging form of workout that can be accessed anywhere and anytime you want to," said Yony Feng, Chief Technology Officer of Peloton.

Okay, 2,245 dollars seems like a lot, but at least it's a one-time investment, right?

Ooh, did we forget to mention the monthly $39.99 subscription service to get those workout videos? Yeah, if you don't keep sending Peloton your hard-earned dollars, the touchscreen becomes a black obelisk awkwardly adhered to your admittedly-well-designed-but-still-pretty-regular stationary bike. That means that if you want to get the most out of it, you have to not only pay for your Peloton Bike, but also keep on paying for the Peloton Bike until you either die or decide fitness "just isn't your thing."

So with all those issues, you can maybe see why Claire O'Connor's father wouldn't think a Peloton is worth it.

But you'd expect the email to get right to the point and then move on. "Don't buy that dumb bike, you nincompoop" would be a reasonable — if not necessarily kind — sort of email in this situation.

But Claire O'Connor's dad? He went above and beyond.

We could all use a quick and easy way to drag someone, if it comes to it. You don't want to be caught flat-footed when it's time to drag.

Wow, this is such a definitive statement on the part of the dad, and a wake-up call for Claire to reconsider any and all purchases she's both made in the past and is planning on making in the future.

Let's break it down.

Here are some other ways God tells us people have too much money: 4K TVs, truffle butter, any party or corporate event with a chocolate fountain, improv classes, the queso at Chipotle, dentists.

Cycling pros sure got a lot of nerve.

Again, where's the lie? There are maybe four people in the world I'd want broadcasting encouragement while I'm on a stationary bike, and not one of them is a cycling pro. (For the record, those four people are Chance the Rapper, Barack Obama, Dwayne "The Rock" Johnson, and former Nintendo President Reggie Fils-Aime.)

And finally, a request:

That's a lot to take in from that email.

We can only imagine Claire's reaction to the email, but if I had to guess, I'd say she took a mental inventory of everything she's ever purchased in her life and sorted them into two columns: "Things I bought because I like them" and "Things I bought in an attempt to live in a more rarified level than the proletariat."

What makes this email so special?

It really is the elegance with which Claire's father tells her, essentially, "Don't buy that dumb bike, you nincompoop." We all expect our parents to tell us when we're messing up, but how often do they do it with such well-argued, Platonic fury? It's good to see a man of this age continuing to hone his language skills and becoming a better writer.

I agree that "after-tax income" is a pretty dad-like phrase, but is it the most dad-like phrase? I think that distinction would go to, "Hey kiddo, how was your baseball game? Sorry I missed it, got stuck at work again."

Could this email change the future of our nation?

Whether he wins the nomination or not, Claire's dad's presence in the primary would push the party further towards an anti-expensive exercise bikes position. You have to imagine that would help Democrats in the bible belt.

Should Claire's dad offer up his financial services?

See, that offer right there? To put him on a monthly retainer? That's gonna be Claire's dad's first area of attack. Because having anyone on a retainer is yet another way God tells us we have too much money. Leviticus 13:12 says, "Pay someone for a job once, not monthly. Also, put your savings in a Roth IRA account — low risk, high potential for growth. It's a no brainer, really."

Now @ jennyglassctb can go back to feeling jealous of her sister for normal reasons, like having the kind of metabolism that lets her eat all those croissants, or getting all their parents' love and affection.

He even made some Peloton owners re-evaluate some things

Yo @ glutengirlinATX, if you really think owning a Peloton is evidence from God that you have too much money, know that there are a lot of worthy causes you could be donating towards. For instance, I want a Playstation 4.

Now that Claire's taken note of your inclination towards non-proletariat grandeur, it's time for her to take the next step and actually join us down here in the proletariat! It's got a lot to offer: the sting of sweat in your eyes; bloody, calloused hands, worked down to the bone; and almost enough pay to live!

Even Peloton themselves chimed in

What do you mean you'd hire Claire's dad "for extreme motivational content tbh"? He's inspiring his daughter to not buy your product! That'd be like hiring the ice cream man to be your personal trainer. The guy has a vested interest in seeing you lose!

There is still the possibility that Claire's dad is a little too set in his ways. What if — and this is just a hypothetical I'm throwing out there — but what if we should be treating ourselves to joy and, yes, frivolity, from time to time? There are some good aspects of buying a Peloton Bike as well!

For instance: I won't lie to you, those instructors are crazy inspirational

"We don't know about tomorrow, we don't care about yesterday," says the very confident instructor who plays Rihanana songs. "What we get is right now. This moment," and that was so inspirational that oops I just sent Peloton 2,245 dollars.

I hope my landlord understands

I'm sure it'll be fine. The dude's been pretty chill the last few times I bought an exercise bike instead of paying rent. (But I am not letting him use this one.)

But for real, should Claire get a Peloton?

Remember, she is still grown-ass woman. She can buy whatever she wants! I almost feel like now she should get the bike just to assert her independence; to prove she won't kowtow to her father, or any man!

How about one of those bikes with the big fan in the front? Does that thing work like an actual fan, or is it just a bizarre design choice? (Whoever made those knows stationary bikes don't actually need tires, right?)

Granted, she'd have to buy an iPad to prop up in front of it

But honestly, old iPad 2s are on Craigslist for, like, 40 bucks. Claire would probably have to drive to a sketchy neighborhood to get it of course, but maybe she could hire a security team for that hour with the 2,205 she's saving by not buying a Peloton?

But whether or not Claire ends up with a Peloton, it's fair to say that if this email keeps even one person from buying something they don't need, it will have done its job

So pull out this email whenever you're tempted to spend money recklessly, and do the things you need to do to maintain your financial wellbeing: close that Amazon tab. Skip the Starbucks run. And for the love of God, cancel your dentist appointment. That whole thing is a racket. Your teeth are fine.