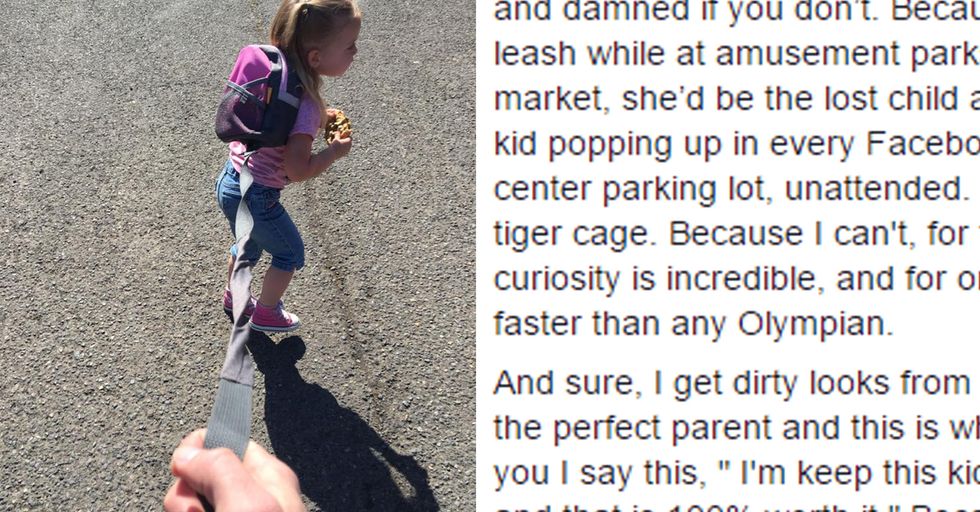 Even before they have kids, most people have pretty strong opinions about how parenting should be done. At some point or another we've all been guilty of claiming that we'd never let our kids watch too much TV, or feed them processed food, or look at our phones while our (hypothetical, still nonexistent) children played on the playground.

Those plans hold up really well, too...right up until you have an actual human child. That's when you discover that sometimes distracting kids with the TV is the only way you get to take a shower, and processed food is better than your kid starving because he refuses to eat anything but buttered bread for three weeks in a row.

Don't even get me started on the sainthood that would be immediately rewarded any parent who actually managed to look at her kid each of the 5,489 times he yelled, "MOM, LOOK AT ME!" on the playground.

In fact, author and humorist Dave Barry once summed the phenomenon up perfectly.

Basically, it's easy to know exactly the "right" thing to do...if you never have to do it. Parenting changes you in a lot of ways though, in part because reality barrels in and steamrollers over your entire life the minute that first baby is born. Suddenly, as much as you thought you'd never become "that mom" who lets her toddler have a stage five meltdown on the floor at Target, by the time your kid is three you find yourself wondering if you have time to browse in the peace and quiet of housewares while he finishes freaking out in the shoe department. One of the things that all too many people (including lots of experienced parents) judge heavily is the use of a toddler leash.

While nobody owes anyone else an explanation for their individual parenting choices, Clint Edwards of No Idea What I'm Doing: A Daddy Blog took to his Facebook page to set some things straight...

...and you could almost hear the lightbulbs coming on as people started to get it.

The leash, he points out, has already saved his daughter, Aspen, from potential danger.

Not to mention it saving his sanity, which is something any parent knows is pretty priceless. As easy as it is to assume parents can carry their toddlers, or put them in a stroller, or hold their hand at all times, that's just not realistic. Especially if you have a "wild child."

Edwards goes on to point out the biggest problem with parenting high-energy kids: no matter what you do, you just can't win.

Luckily, he doesn't let the judgement of others get in the way of doing what he knows is right for his daughter, at this particular stage of her life.

His post now has over 3,500 comments, and the reactions have been pretty surprising — and often pretty funny.

One mom pointed out that while the leash might prevent some dangers, there are other dangers to look out for, too.

Beware the influence of jokester uncles! Although, given some of the things my kids have blurted out in public before, I'm sure there were plenty of times I'd have preferred them to bark like dogs.

While of course there were a few who still called using a leash lazy or inhumane, the response was overwhelmingly supportive.

After all, your child's safety will always be more important than...well, than anything really, but certainly a lot more important than what some stranger thinks about it. Using a leash is still one of those things that sometimes carries a stigma, even among parents, but Edwards' post really opened a lot of people's eyes; because even if you have kids of your own, you still might not "get it" if you've never had to handle a wild child.

Sometimes understanding can only come from firsthand experience.

In the absence of having an energetic nephew to borrow, however, Edwards' words really struck a nerve with many.

And luckily, outdated and judgmental opinions can change.

Especially when people like Edwards are willing to share their stories, there's hope that parents will have fewer dirty looks to deal with the next time they buckle up their kid's leash. Even if that kid happens to be barking like a dog.