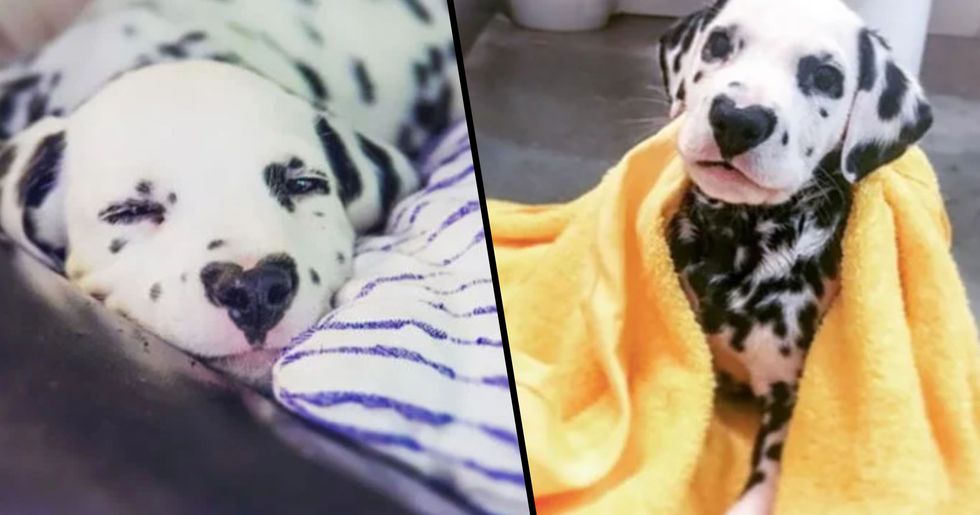 This Dalmatian Has a Heart on His Nose and He's Perfect

The internet loves a cute pet - and this one may be the cutest we've seen. Dogs are already all around great news - and dogs with heart patterns. Well, that just takes the biscuit. This is one pooch who truly must be seen to be believed.

Wiley, the Instagram famous dalmatian, has gone viral for his incredibly cutesy markings. We think he's adorable - and his one hundred and twenty thousand fans seem to agree. Scroll on for some of the cutest dog pictures you've ever seen.

The internet sure loves dogs.

And who could blame us? They're basically the best things about being alive.

And there's one dog which has really taken the internet by storm this week.

Wiley the dalmatian is the latest pet to enjoy the heady heights of Instagram fame.

But this is no ordinary dalmatian.

By some happy accident, he's ended up with the cutest marking we could possibly imagine - a heart right on the tip of his nose.

The one-year-old quickly rose to Insta fame thanks to his unique markings.

"No amount of pictures could ever fully capture all that he is and all that he means to me, he’s my best friend," she claims.

He was born in Colorado.

But he now lives with owner Lexi Smith in Oklahoma.

"The heart was there, but not fully formed to the point where I believed it would stay since dalmatian spots change so much as they grow."

"I chose him because the breeder told me that all he did was sleep, snuggle, and eat, so we already had a lot in common."

"Wiley has more personality bundled up into his little body than any dog I have ever met."

"We are so lucky to live in Colorado and have the biggest most beautiful places to play in and explore."

"He loves hiking or going to one of the many massive dog parks here."

He's also partial to sitting in the passenger seat of a car and pretending he's driving - plus he still totally loves naps.

According to his mom, he also has a tendency towards that typical dalmatian trait of stubbornness, too.

"Usually, it’s a giggle paired with shaking my head, laughing off total frustration from his stubbornness, but that’s part of owning the breed."

It takes a brave owner to take on a dalmatian.

"If you can’t laugh it off and be creative in finding a solution and training the naughty traits out of them, life with a dalmatian would be such a challenge."

But she wouldn't change him for the world.

"I have been really lucky with Wiley, though. He has the best heart, and I’m not talking about the one on his nose. He loves everyone he meets and is always so excited to make new friends."

"He has made the best little adventure partner I could ask for."

Wiley and Lexi are super close, with the pooch apparently barely leaving her side.

"He requires so much attention and he’s basically attached to my hip, but that’s what I love about him."

And Lexi isn't alone. It seems the whole world is obsessed with this adorable doggo.

And his distinctive appearance means he gets noticed wherever he goes.

"Some people recognize him as 'that dog from the internet' -  a lot of people notice the heart nose," Lexi explains.

But it's not just Wiley's adorable appearance that's gained him internet popularity.

Lexi's clear talent for photography has also propelled her Instagram to the height of internet fame.

The pictures are undeniably excellent.

"Photography has always been something that I have toyed and experimented with, and suddenly I had an adorable puppy who made the perfect model."

And the decision to focus on Wiley was an easy one.

"I have a personal account, but creating a separate one dedicated specifically to Wiley seemed like a great way to kind of store all my photos of him and keep a running timeline of his life."

But she never intended to reach the dizzying heights she has.

"It truly started as something meant for just me and maybe some of my friends to see his growth and keep the memories of every stage and event with Wiley."

The numbers continue to surprise.

"When the account first started growing I remember thinking ‘Wow, what if he hits 5,000 followers!’ I never in a million years could have imagined it would be what it is now. And it’s still growing."

But Lexi has no regrets.

"I am constantly amazed, shocked, but mostly so grateful. It has been a fun little adventure, that’s for sure."

They make an adorable pair.

Wiley's heart markings are uber-cute - but it seems they're not even the best thing about him!

And the best news?

There are even more adorable snaps on Wiley's Instagram. Want more cute dog content? Scroll on for the footage of pets arriving at their doggy daycare. Spoiler alert: they're all very excited.