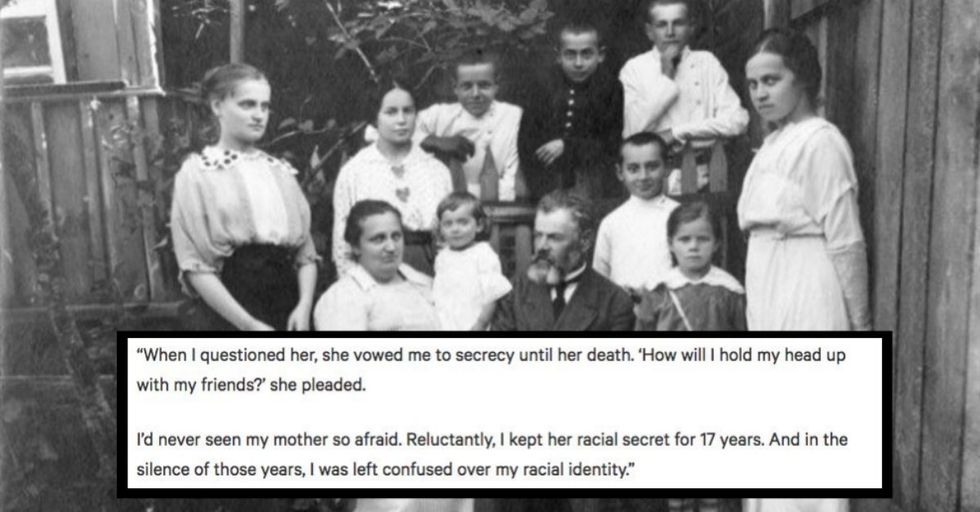 Gail Lukasik grew up never having met her mother's family. Her mother kept no photographs, and was reluctant to share any information about them. As an adult, Lukasik remained curious about her mysterious family history and decided to do some research. What she discovered led her to question her entire identity, and wonder how her mother could possibly pull off such a brazen lie. In her new memoir, White Like Her: My Family’s Story of Race and Racial Passing, Lukasik recounts the moment her entire sense of self shattered, and what her journey has been like since.

Author Gail Lukasik was always curious about her mother's side of the family.

Her mother rarely spoke of her family, had no photos of them, and certainly never took Gail to New Orleans meet them. As secrets are wont to do, her mother's reticence made Lukasik insatiably curious. She didn't know anything about her mother's father aside from his name and the fact that he lived in New Orleans. It wasn't until she was nearly 50 years old that Lukasik finally found her grandfather — and the truth her mother had so carefully hidden.

In White Like Her: My Family’s Story of Race and Racial Passing, Lukasik tells the story of the jarring discovery that her mother grew up in a mixed race family, and was legally designated as "negro" until she moved north, married the author's white father, and passed as a white woman for the rest of her life.

The author's father, who she describes as bigoted, would go to his grave never knowing that his wife was not white. She kept her racial history carefully hidden, with makeup a shade or two lighter than her olive complexion — which she even wore to bed — and carefully cultivated white manners. Becoming white was not without risk. Lukasik's parents were married in 1960, seven years before interracial marriage became legal. Passing herself as a white woman, Lukasik's mother must have encountered and endured countless acts of racism and open bigotry.

Lukasik made the discovery while researching the 1900 New Orleans census, looking for her grandfather.

She was hoping to find any information, possibly a photo or family tree, that could satisfy her curiosity about her mother's family. She had no inkling that the reason for her mother's secrecy was that her family was black. After hours of research, Lukasik finally found his name. Next to it, under the column for race, was the letter B. She confirmed that B meant black.

The discovery sent the author reeling.

In the book, Lukasik describes the feeling. "What just happened? I felt like I’d had an out-of-body experience. In a split second I became someone else, my identity in question. When I walked into the squat, brown building I was a white woman. When I left I didn’t know who I was." Back then, the law was the "one-drop rule." If a person had even one ancestor with sub-Saharan-African ancestry, regardless of how far back, the person was considered black, having just one drop of black blood. The author's mother's family was of mixed race. She had grown up in mixed neighborhoods and black neighborhoods. Her features looked European and her skin was olive-toned, but that still hardly accounts for the audacity it took for her to leave her entire family behind, move north, and pass herself off as white at that moment in American history. Lukasik says, "But her passing came at a cost. Although she gained white privilege, she lost her family and her authentic self. It couldn’t have been an easy choice for her."

Lukasik's mother was still alive at the time of her discovery.

Had the author not been so intensely curious, her mother would have died with her secret untold. Instead, Lukasik had the opportunity to ask her mother about it. "When I questioned her, she vowed me to secrecy until her death. 'How will I hold my head up with my friends?' she pleaded. I’d never seen my mother so afraid. Reluctantly, I kept her racial secret for 17 years. And in the silence of those years, I was left confused over my racial identity." Since her mother's death, Lukasik has been able to publicly acknowledge her mixed race heritage. She has reconnected with that side of her family. "I’m now part of a multi-racial family. Finally I know all my people. Finally, I know who I am — a mixed-race person. You’d never guess." Lukasik's mother's story is fascinating. It's hard to put ourselves in that time and place, to truly appreciate the depth of the deception and the risk involved.

White Like Her: My Family’s Story of Race and Racial Passing was released by Skyhorse Publishing on October 17, and is available at Amazon and major booksellers.