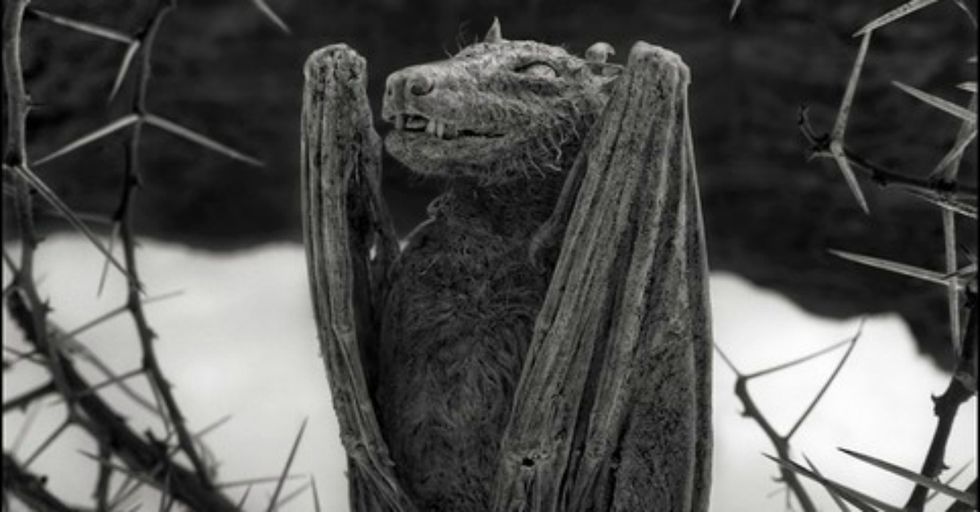 At first glance, Lake Natron in northern Tanzania looks like any other beautiful body of water. Fluffy pink flamingos stand in groups on the shore, and towering mountains provide a picturesque backdrop. But upon closer inspection, something isn't quite right about this lake, and it's doing something truly disturbing to any animal that dare enter it.

Keep reading to discover what's really going on with the deceivingly beautiful Lake Natron, and why it's known as the "Petrifying Lake."

Lake Natron serves as a breeding ground for the Lesser Flamingo, as well as various types of bacteria and algae.

Other than that, it's inhospitable to living creatures.

It's a Soda Lake or alkaline lake, which means it has extraordinarily high concentrations of carbonate salts.

“The water has an extremely high soda and salt content, so high that it would strip the ink off my Kodak film boxes within a few seconds," said photographer Nick Brandt in his new photo book 'Across the Ravaged Land'.

It's also a shocking blood-red color, which it gets from the bacteria that inhabit it.

The temperature is nearly boiling and can get up to 140 degrees Fahrenheit according to the New Scientist.

The pH of Lake Natron is 10.5, which can cause horrible burns to the eye and skin of animals that haven't adapted to such high levels.

More than 2 million Lesser Flamingos use the alkaline water as their primary breeding location.

They build their nests on small islands during the dry season.

Lake Natron and Lake Bahi are the only two alkaline lakes in East Africa.

Both lakes are extremely shallow and are fed by smaller rivers and hot springs. Brandt discovered something amazing during his trip to Lake Natron, and the photographs will take your breath away.

Animals, both on the shore and floating in the water, that look as though they have been turned to stone.

The haunting photos are almost too amazing to believe.

“Discovering [these animals] washed up along the shoreline of Lake Natron, I thought they were extraordinary — every last tiny detail perfectly preserved down to the tip of a bat’s tongue and minute hairs on his face," Brandt said to The Huffington Post.

"The entire fish eagle was the most surprising and revelatory find."

“No one knows for certain exactly how [these animals] die, but it appears that the extreme reflective nature of the lake’s surface confuses them, causing them to crash into the lake," Brandt wrote in his photo book.

Brandt goes on to explain the animals' stone-like appearance.

"The soda and salt causes the creatures to calcify, perfectly preserved, as they dry," he said.

Brandt described the creaturess as being "rock hard" due to the calcification.

“There was never any possibility of bending a wing or turning a head to make a better pose — they were like rock," he said, “so we took them and placed them on branches and rocks just as we found them, always with a view to imagining it as a portrait in death," he added.

When asked why he decided to photograph the animals, Brandt explained what drew him to these ghostly creatures.

“The notion of portraits of dead animals in the place where they once lived, placed in positions as if alive again in death, was just too compelling to ignore," said Brandt. “I took these creatures as I found them on the shoreline, and then placed them in ‘living’ positions, bringing them back to ‘life’, as it were. Re-animated, alive again in death."