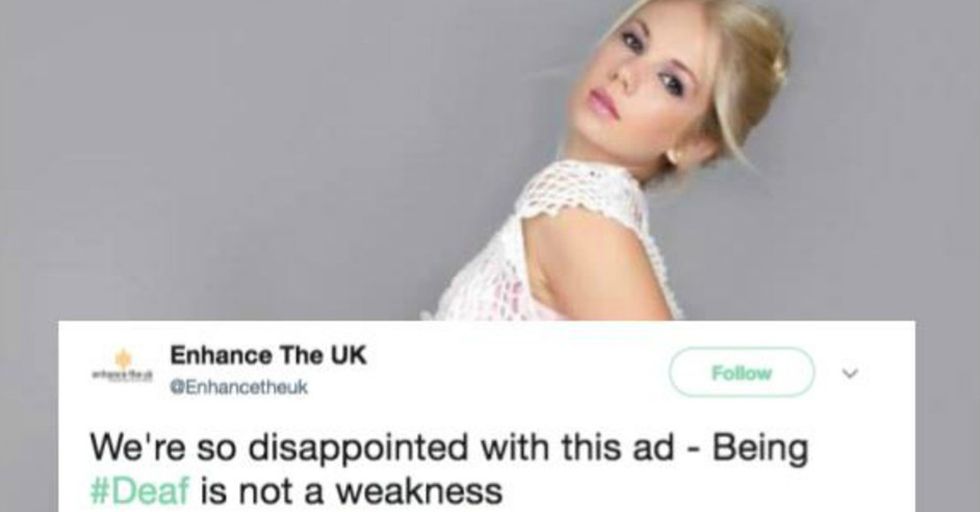 When was the last time you saw a hearing-impaired model featured prominently in a major ad campaign? Yeah, nothing comes to mind for us, either.

That's why when Virgin Active invited a dancer with a cochlear impact to appear in an, it was pretty groundbreaking.

However, when she saw the finished ads, she quickly went from super excited to profoundly disappointed.

She also happens to be deaf. "I was born profoundly deaf and received my CI (Cochlear implant) at the age of 22 months. At that stage I was the youngest child in Africa to receive it, without my CI I hear absolutely nothing at all," said Welgemoed.

So you can imagine her excitement when she discovered she'd been selected by Virgin Active to appear in their most recent ad campaign.

During the shoot, Welgemoed wore her hair pulled up into a tight bun and struck a series of ballet poses. But when she first laid eyes on the completed ad, there was one prominent feature missing: her cochlear implant, which would have been clearly visible. It had been Photoshopped out without her permission.

Instead of just letting it go, however, Welgemoed made a powerful statement about the way our society views the disabled.

In a Facebook post featuring the doctored image, she wrote: "I'm not somebody that just rants on about every little thing, but this is something that affects me personally and I am saddened by what I see..."

"This is a billboard picture of me posing for Virgin Active and if you don't know me personally then you wont miss the tiny piece that is a cochlear implant that is supposed to sit on my head."

"They just went and without my permission decided to edit the cochlear implant out, because why!!??? It doesn't fit with their pretty little picture of portraying the perfect life that is Virgin Active?"

"Well guess what?" she continued...

"Life isn't perfect. No one is perfect. I am proudly hearing impaired and was happy to inspire through Virgin Active that people with hearing disabilities also lead and enjoy an active and healthy lifestyle."

"I guess my cochlear implant shamed you so much that you had to edit it out. Well you just edited out a part of who I am and didn't ask my permission and I'm not OK with that." Luckily, the story has a happy ending.

The team at Virgin Active South Africa invited Welgemoed into their office to apologize and make things right.

"To Jacqi, Zeyad and Carla I'd like to say thank you for your warm welcome, heartfelt apology, beautiful flowers and contract to join the gym," wrote Welgemoed in her second Facebook post about the campaign. "I am glad that we could discuss the matters in a sincere and positive manner so to not only address the problem that arose yesterday but to also look forward and see how these matters can be taken into consideration going forward."

"I look forward to be assisting, advising and guiding Virgin Active on these matters and I was also thrilled to hear that the brand has already helped so many other disabilities to better use their facilities."

"They are now aware of the hearing impaired/deaf needs as well and are happy to lend an ear as to how they can be of assistance. I will most def give you my feedback when I start hitting your gym in the coming week. ♡ The ORIGINAL billboard showing my CI will be put up in the week to come." Victory! We need more representation for ALL types of people, including those with disabilities, so more companies like Virgin recognize that their idea of so-called "perfection" doesn't really exist.