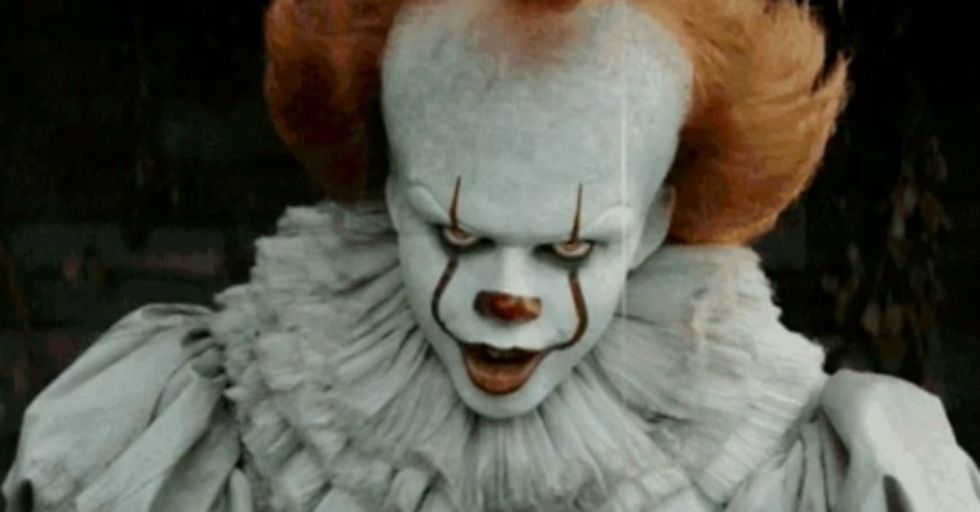 The movie It has enjoyed incredible success at the box office. The insanely creepy clown, hilarious children, and unsettling town of Derry, Maine come together to make a truly spooky and enjoyable movie. But there's something missing from the It we all saw in theaters.

Apparently, there's a deleted scene that was so terrifying that it didn't make it into the final cut.

As if we needed another reason to be afraid of It...

If you've seen It, you know that it's filled with some pretty disturbing scenes.

And if you haven't seen it yet, what are you waiting for? It's breaking all the records and it's very, very good! People everywhere are flocking to theaters to enjoy a good scare.

Luckily for the fans, the movie is filled with plenty of jokes.

Seriously. "These are gazebos!" "Who invited Molly Ringwald?" "He's leaking Hamburger Helper!" So many hilarious lines.

But even though there's plenty to laugh at in the film, It has some seriously spooky scenes.

Like the scene in the Denbroughs' flooded basement. How can half of a clown's face be even more terrifying than a clown's whole face?

Or the scene with the projector in the garage.

It'd be one thing if the clown just stayed in the pictures. When he came out of the screen, though? No thank you.

There was no shortage of creepy scenes in It, but now there's news of a deleted scene that's more disturbing than anything we saw in the movie.

Bill Skarsgaård recently went on the record talking about the scene in an episode of Variety's Playback podcast. After learning about what actually happens in the scene, we're kind of glad it was left out. It's pretty disturbing stuff...

The scene has already been filmed; it just didn't make it into the final cut of It: Chapter 1.

There's a chance that it could be included in It: Chapter 2, though. But don't expect to see any of your favorite characters (either as children or as adults). The scene takes place in the 1600s and gives audiences a glimpse into Pennywise's origins.

Skarsgård acted in the scene, but he wasn't wearing any clown makeup.

"I'm not the clown. I look more like myself," he said on the podcast. He also said that the scene turned out "really, really disturbing."

Although the scene in question hasn't been released to the public, fans have started sharing their theories about what it could contain.

The consensus is that it might be a scene from (or at least inspired by) Cary Fukunaga's script. Fukunaga was originally hired to direct the films but left the project after budget cuts made him feel like he'd have to compromise his artistic vision.

One of the scenes in Fukunaga's script is a flashback to the 1600s.

Sound familiar? The scene is an origin story for Pennywise that takes place before he's a clown. Instead of his clown getup, he appears "incomplete, his flesh pale and translucent, like a half-formed imitation of a human." That would explain why Skarsgaård wasn't wearing clown makeup.

In the scene, a mother encounters It with her young daughter in tow.

It begins attacking the young girl. When the mother steps in to save her daughter, Pennywise overpowers her and then gives her a choice. She can either watch him destroy her entire family, or save herself and leave her daughter. She chooses to let Pennywise devour her child. Yikes! As it turns out, there are a couple more scenes from Fukunaga's script that would have made a pretty disturbing addition to the film...

For instance, there's one scene that features a lumberjack entering a bar and slaughtering a group of men who are playing cards.

No one seems to notice what's going on. The scene then reveals that Pennywise is playing the piano in the bar, and has been controlling the lumberjack's movements. Spooky!

It's "true form" in Fukunaga's is way different from what we saw in the movie.

Apparently, in Fukunaga's script, It's true form is some kind of weird starfish with tentacles. That's...not as spooky as the terrifying clown, but who knows? Maybe it would have been scarier in movie form.

Anyway, we're relieved that we escaped that horrifying flashback scene in this version of It.

Have fun thinking about it when you're trying to sleep, though! We all float down here...