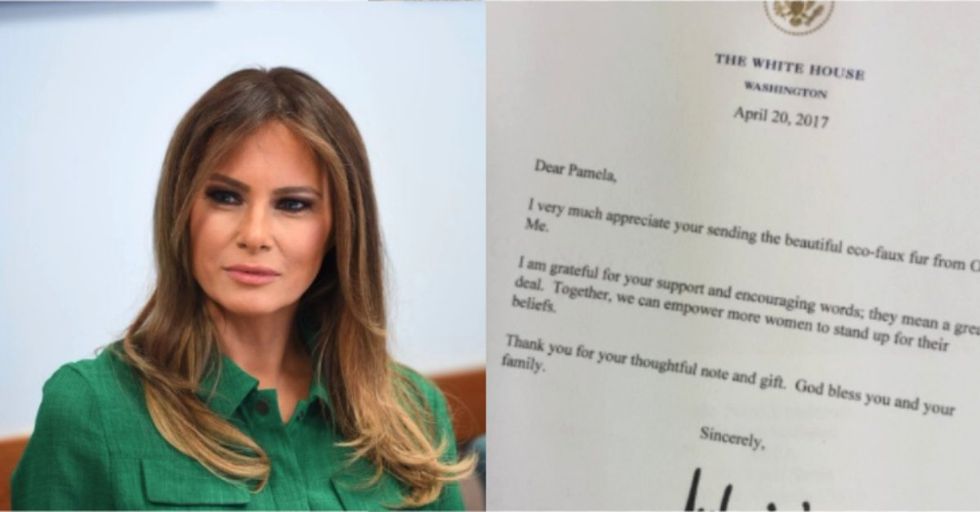 Whether it's wearing inappropriate shoes to visit Hurricane victims or refusing to hold her husband's hand in public, you can always count on our first lady to do something fascinating enough to get written about online. Today, though, she's the one doing the writing.

The first lady has a bit of a history of "borrowing things" from other people.

Sometimes it's entire speeches from former first ladies. Recently, people even started wondering whether she was trying to copy Hillary Clinton's signature pantsuit style. Today, though, we're talking about her signature.

You can see Melania Trump's signature on this letter to Pamela Anderson:

@flotus Dear Melania, Thank you for your sweet note. It is heartwarming to see you manage your position with such… https://t.co/JvAx6xJWUm
— Pamela Anderson (@Pamela Anderson)1493801100.0

(Who would have guessed Pamela Anderson would have anything to do with this story, right?) Anyway, there's Melania's signature. We know what you're thinking. First of all, that signature does not say "Melania Trump." It says "IuIauir Iuuuuuuuul."

Secondly, haven't we seen this signature before?

It looks awfully familiar, right? Where else have we seen a name this tall and pointy?

Donald Trump's signature is also super big and sharp (two words which are not typically used to describe signatures, but here we are). There are slight differences between Melania's signature and Donald's — his looks more like "DvvvISvvvvvvvvnA" — but the similarities are pretty astounding.

Here's a picture with both signatures so you can see the similarities for yourself:

So what gives? Why do IuIauir Iuuuuuuuul and DvvvISvvvvvvvvnA have such similar autographs? Yahoo Celebrity spoke to a handwriting analyst named Sheila Kurtz about the similarities. "Hers looks just like his, which is absolutely amazing," Kurtz said of the signatures. She went on to explain that Melania's is most likely styled to look like Donald's on purpose. "Maybe they brought someone in to show her how to do it or [it’s] a stamp, but it is definitely stylized." Put your pitchforks away, folks! Apparently, Melania wants her signature to resemble her husband's. Weird. But...OK?