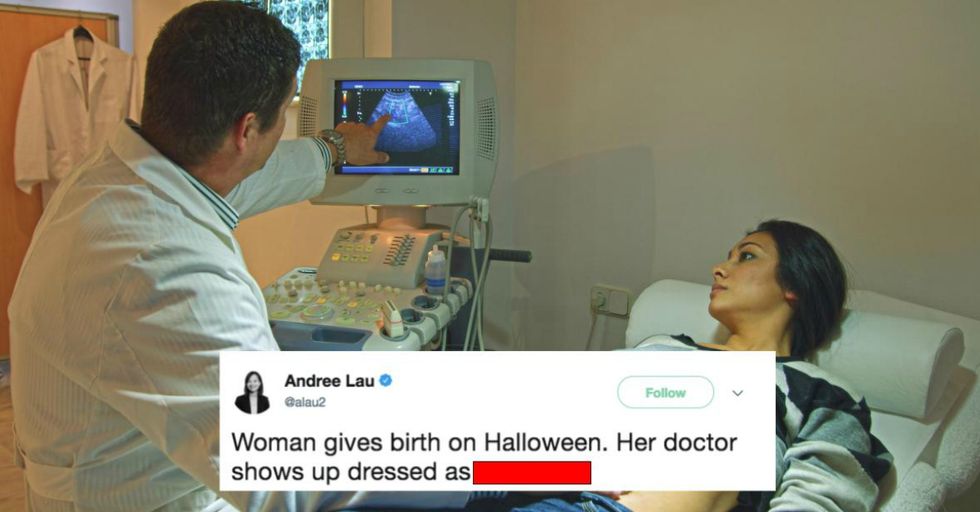 Halloween is a day to pull out your scariest costume and delight in terrifying as many people as possible. It turns out, this is also the case for doctors, and when a baby needed delivery on October 31st, a certain gynecologist sprang to action ... in full costume.

Giving birth is one of life's most beautiful experiences.

You finally get to meet the little human that's been growing for the past nine months, and in an instant, your entire world is turned upside-down. Most expectant parents plan out the day down to the minute to ensure a smooth and stress-free experience.

A good relationship with your doctor is also key.

You need to feel comfortable with the person who will see you in your most vulnerable state. You're basically putting the life of your child in their hands, so it can take some searching to find the right match.

When Justin and Brittany Selph discovered they were expecting their third child, they chose their doctor wisely.

They selected Paul Locus, a gynecologist at the Henry County Medical Center in Tennessee.

The family had developed a close relationship with Locus throughout Brittany's pregnancy, and were well aware of his zany sense of humor.

On the morning of October 31st, Brittany started having contractions.

The family checked into the hospital and settled in for a long night. As Brittany's contractions intensified, Dr. Locus came in to check on Brittany and discuss the birthing plan.

There was, however, one thing a bit out of the ordinary.

Considering it was Halloween, Dr. Locus was in a fairly elaborate costume, and he was planning on heading home to change before coming back and delivering Brittany and Justin's baby. The couple, however, insisted that he kept the costume on. So what character was the good doctor dressed as, you may ask?

That's right. Brittany is probably the only woman on earth who can say that her child was delivered by The Joker. The scary Dark Knight version, to be more specific. Here he is just casually walking through the birthing process ... dressed as a murderous clown. No big deal.

Justin also managed to get snap some pics of Dr. Locus in action.

We're pretty sure these are the best birthing photos of all time. While some women might not be too keen on the idea of The Joker being the first thing their precious infant sees after being born, Brittany didn't seem too concerned.

After all, how well do you remember the day YOU were born?

The delivery went perfectly, and both baby and Brittany are recovering beautifully. Justin told Buzzfeed about an interaction with Dr. Locus the following morning.

In true Joker form, he made a very fitting joke about the rather unique birth.

"When [Locus] came in our room the following morning, in normal doctor attire, he said, 'Sorry I couldn't make it in last night, glad to see the delivery went well'," said Justin.

"He was a great sport about it all."

They even made it onto the News Channel 5 Nashville Facebook page, which has so far received 1.5K likes and 851 shares. Justin and Brittany have an amazing sense of humor about the experience.

"I actually joked with my wife earlier in the day, after we had first seen that he was dressed that way, that I should go get some face paint and fix her up as Harley Quinn, The Joker's girlfriend," said Justin.

"But unfortunately we didn't."

Oaklyn Saige Selph was born at 8:20 p.m. on Halloween night. With a birth like this, we're guessing little Oaklyn could have an interesting response to clowns when she grows up.