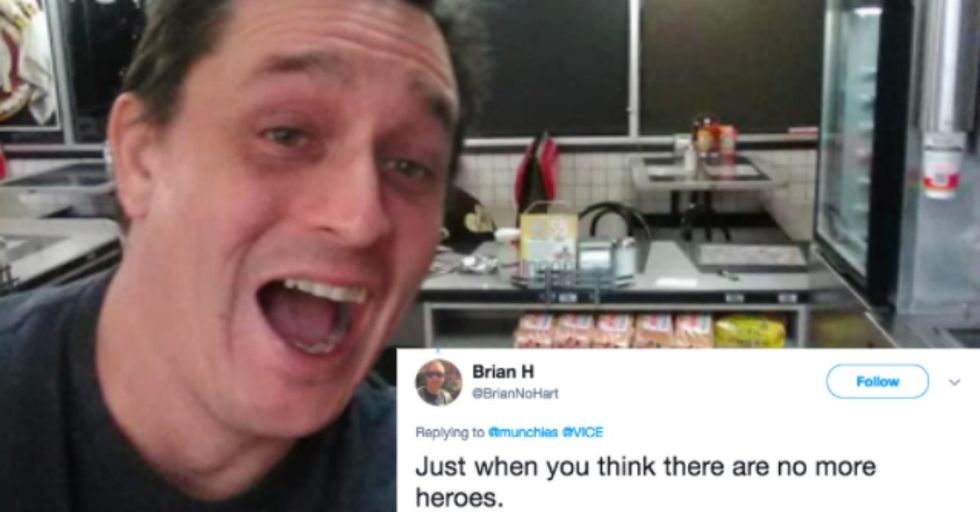 This Drunk Guy Went to Waffle House, Saw Everyone Was Asleep, and Took Matters Into His Own Hands

There's nothing quite as magical as Waffle House, except for maybe that greasy, perfect meal you eat after a long night of drinking. In this story, the two combine into one story of epic proportions.

When you're drunk, and you're in a Waffle House, and you just want some dang delicious food, what are you supposed to do when the staff is asleep? Leave? Go somewhere else?! Heaven forbid. This guy did what most wouldn't be brave enough to do: He made his own meal.

Just imagine: You dragged yourself off your couch, switched off The Great British Baking Show, and even put on pants. You went your friend's B-day bash and drank the night away. And now, you need food.

What could be better than a buttery, gooey, syrupy stack of waffles from Waffle House? Answer: nothing.

That's exactly what happened to Alex Bowen (maybe minus the baking show marathon).

After a night of partying, the West Columbia, South Carolina resident walked into a Waffle House around 3 a.m. looking for some tasty treats.

They're open 24/7 for a reason, after all. But much to Bowen's chagrin, there was no one at this Waffle House to take his order.

No one conscious, at least. Because all of the employees were sleeping, Bowen decided to cook himself his own meal. He also decided to document the whole thing.

And thank goodness he did.

Pictured here is a blurry member of the Waffle House staff who just so clearly didn't have the energy to deal with drunk customers at 3 a.m. Bowen told ABC News that he stood at the register for 10 minutes waiting for someone to take his order.

So, Bowen said, "That's when I got hot on the grill with the Texas bacon cheesesteak melt."

What can we say? When you need, bacon, you need bacon. Bowen may not be the hero we deserve, but he's the one we need right now. And people, he's not remotely done yet...

Next, Bowen grabbed the rest of his sandwich materials and finished cooking.

In case you're wondering, he cooked his meal to go and yes, he cleaned up after himself. Bowen is pretty much a sandwich god.

Apparently, he only noticed the sleeping employee after he'd cooked his whole meal.

The guy didn't wake up once while he was there. Not even the smell of bacon aroused him! No one else came to the restaurant either, so Bowen had the place to himself.

Bowen didn't initially pay for his meal — there was no one awake to pay — but like a true gentleman, he did return to the Waffle House later that day to square up.

Obviously, the story went viral. Because it's amazing.

A district manager for the Waffle House asked Bowen to become a "Waffle House secret shopper." We don't know what it is but we imagine it involves eating a lot of waffles, so we are totally on board.

Even though Bowen is undoubtedly a hero, Waffle House made a statement to ABC News to let people know that customers probably shouldn't get behind the counter.

"For safety reasons, our customers should never have to go behind the counter. Rather, they should get a quality experience delivered by friendly associates. We are reviewing this incident and will take appropriate disciplinary action. In a related note, obviously Alex has some cooking skills, and we'd like to talk to him about a job since we may have something for him." Waffle House and Alex Bowen sound like a dream team.
20%