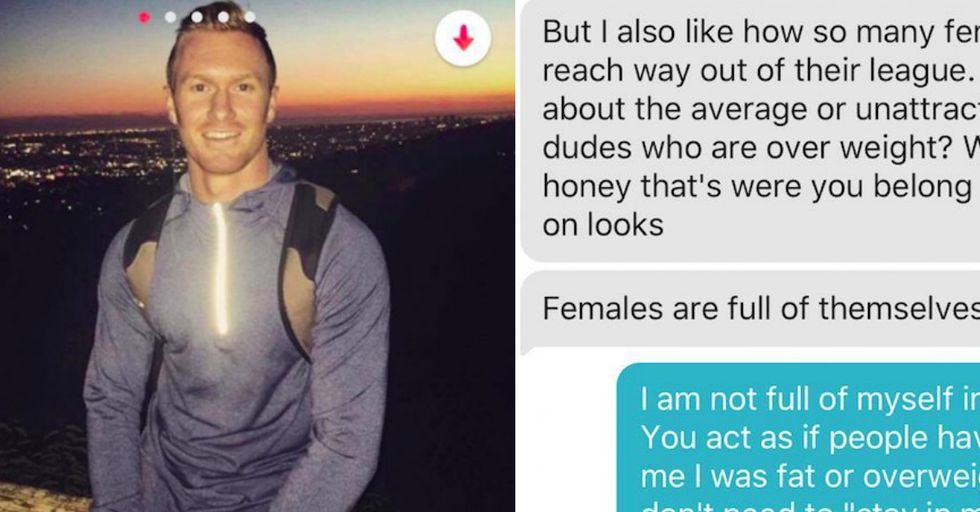 Tinder is basically a crapshoot. While sometimes you can find someone to swipe into your life with the dating app, other times you find cruel bullies padding their own insecurities through heartless insults.

That's what happened to a twenty-three-year-old woman who wants to remain anonymous, but who is calling out raging egomaniac Connor, who filled her inbox with a slew of ridiculous messages.

Apparently having nothing better to do, like shopping for a hoodie he didn't feel the need to zip up all the way to his nostrils, Connor went on to insult the woman’s looks and integrity, going so far as to call her unattractive and to make fun of her weight. WHAT A WINNER!

Here are some of the awful messages:

Apparently Connor only swiped right on the woman with the sole intention of insulting her — something so cruel, it’s hard to imagine.

Honestly, she's a champ for even entertaining any type of communication with him that isn't full of four letter words, because let me tell you what, I would have gone off on the dude. But he's not done yet...
The woman told Elite Daily: "What I want people to know at the end of the day [is that] it’s more important to be known for being a kind person or an intelligent person or loving and caring rather than what I look like. Being called fat hurts, but there are worse things I could be called, and I know that I bring to the table a lot more than he will ever realize because I treat people kindly, with love and respect, regardless of their appearance." Amen, sister. Swipe this dude right from your memory.